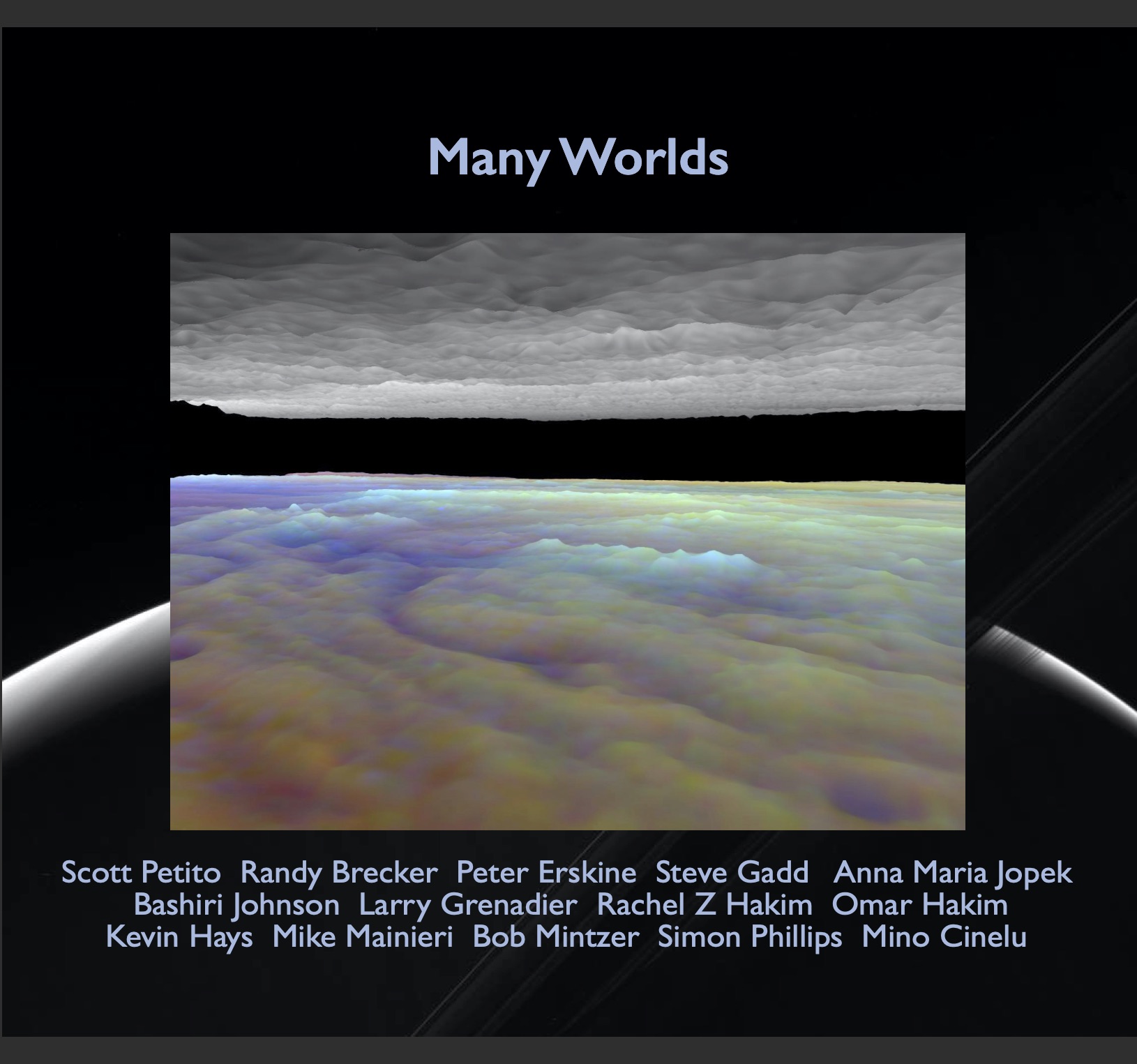 Bassist, composer and multi-instrumentalist Scott Petito reimagines the retro jazz universe among all–stars on Many Worlds, due out February 24, 2023 via Planet Arts

“To call it ‘fusion’ is to diminish the deep roots the music and players have planted in bop, funk, and Latin music. But it sure does rock, too,” – Seth Rogovoy

Scott Petito is a bassist, multi-instrumentalist, composer and producer with an exemplary career under his belt. He has recorded and produced an eclectic pool of legends including Chick Corea, John Scofield, Dave Brubeck and Keith Richards, to name a few. With credits stretching over a thousand recordings, Petito’s impressive slate of experience shines in his compositional efforts. This deftness became evident on his 2018 melting pot of a masterpiece, Rainbow Gravity. It is endured on his latest excursion, Many Worlds, due out February 24, 2023 via Planet Arts.

Rhythms bounce between genres instinctively on this new enterprise, a conceptual sequel to Rainbow Gravity. Both albums source inspiration from quantum physics. The interplay of musicians is much like the quantum dance between infinite time and space.

Created amid the staggering standstill of the 2020 pandemic, Many Worlds was an opportunity for the bandleader to craft and curate meticulously. A skilled producer and engineer, he capitalized on recording remotely during this time. The result is an internationally-lauded band of friends that would have otherwise been unable to gather in a single studio. Notable on Many Worlds is Petito’s expertise in tailoring each composition to his world-class bandmates.

As a musician and composer, he strives for a sense of timelessness and design. The title track “Many Worlds” is an effective example. Petito’s bass and layered electronics capture the feeling of spacious grandeur.  “The experience of playing and listening to music can suspend us and yet at the same time sweep us away to new places with infinite possibilities. That relationship between music and our very essence of being always struck me as the most human of experiences,” he adds.

At times an homage to the works of Miles Davis, Weather Report, Chick Corea and others, Many Worlds connects to an inspiring period of jazz during the ‘70s. The scintillating developments at that time would lay a historic bedrock for the evolving scene of jazz fusion. “Many Worlds is not nostalgia but a reimagining of that period,” Petito explains. This idea influenced his choice of personnel, as many of the musicians on this record were directly involved in the evolving jazz scene of the 1970s and 80’s.

Musically, one of the unique elements of this album is that each track has a different ensemble. Due to the nature of remote recording, Petitio was able to call exactly who he envisioned to bring the tracks to life. As a result, each composition is in itself a microcosm of style and expression. Album opener “Dabwala,” a Latin-inspired original groove held down by Steve Gadd on drums, defends this sentiment. Acclaimed Polish vocalist, Anna Maria Jopek, contributes a jubilant and energized vocal performance followed by an expressive and buoyant EWI solo from Bob Mintzer. Rachel Z Hakim follows on piano before passing back to Petito for a piccolo bass solo on the ride out.

On “The Alchemist” Randy Brecker contributes a haunting trumpet to a groove reminiscent  of Bill Laswell with a dose of Domi and JD Beck. The rhythm section of Omar Hakim, Rachel Z Hakim, Petito and Mino Cinelu simmers throughout this atmospheric piece.

Petito honors the legacy of late piano icon Lyle Mays on his arrangement of the Mays original “Close to Home.” Recorded not long after Mays’ passing in 2020, the track rallies a seasoned cast for the rendition. Rachel Z Hakim, Peter Erskine and Mike Mainieri form a salient and chilling tribute to the longstanding member of the Pat Metheny Group, forging Petito’s most wistful planet within this sonic cosmos.

The placid title track constructs a temporary trance before the pace increases with “Bombogenesis”. An indication that a stronger, more powerful storm is looming, the climatic term is commonly referred to as a “bomb cyclone,” meaning the atmospheric pressure has dropped. It’s not a coincidence that Petito’s stirring instrumental cyclone is stationed at the heart of Many Worlds, a composition that is more outstanding than disastrous. “Mr. Peanut” ensues in celebration of survival, offering a harmonious post-storm conversation where Kevin Hays, Mainieri, Gadd and Mintzer all shine as soloists.

One of the most powerful elements of Many Worlds is the band itself. This album pools a myriad of experience, expertise and master stylists to craft something delicate and soulfully resonant. “They are among the best who have ever played modern music,” Petito shares. “I am so lucky to have worked with every one of them in various configurations over my career as a musician and producer. They make it easy.”

Parsing through the physics of nature and eternity, Scott Petito provides clarity to terms that are otherwise bewildering. A sensational experience presenting consummate performance and thought, Many Worlds is a challenge as much as it is a gift. As Petito emplores listeners to maintain hold of the past, he asks that we continue to reach forward with him, boundlessly.