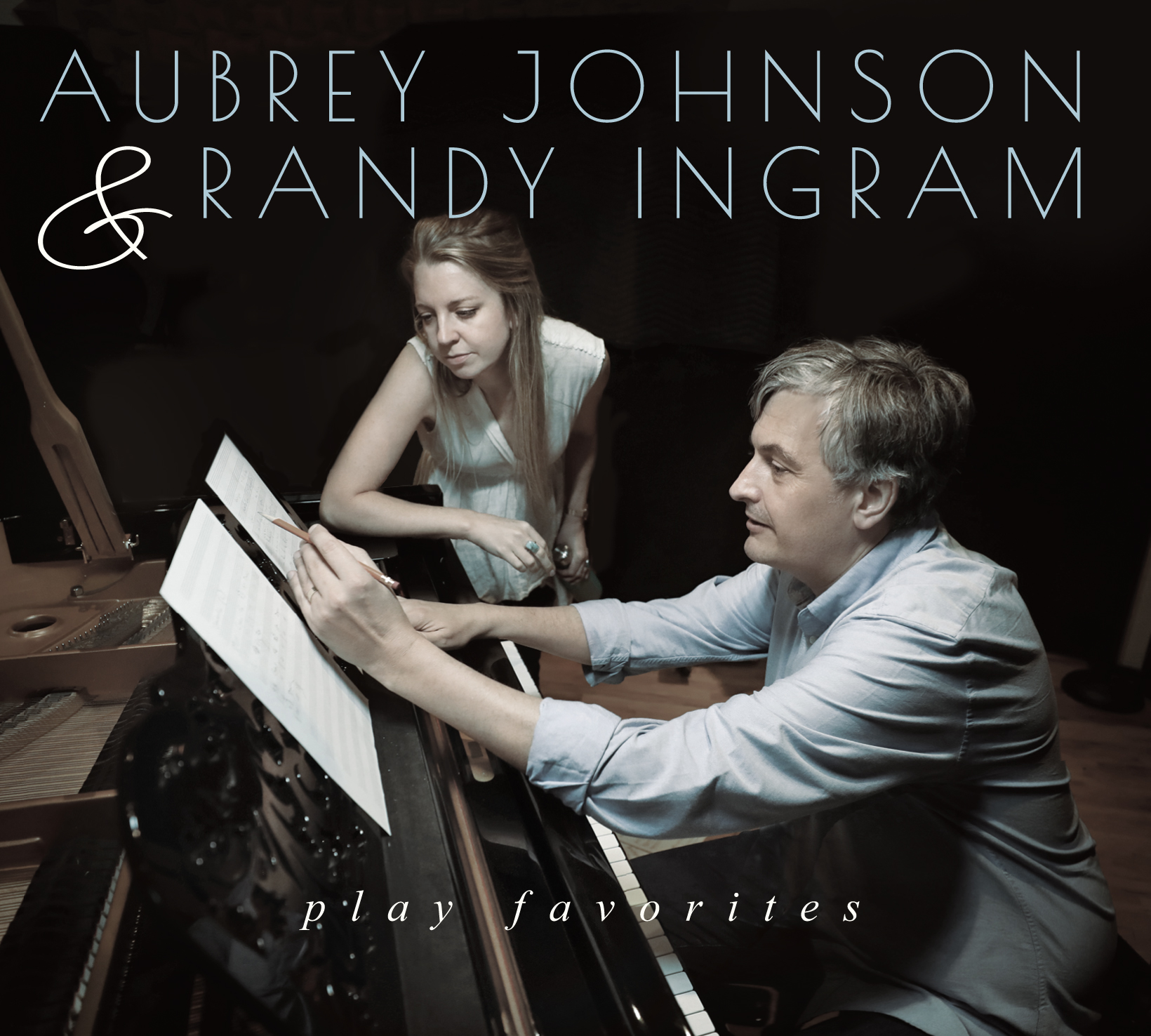 Acclaimed Pianist Randy Ingram and Virtuosic Vocalist Aubrey Johnson Team Up to Produce Play Favorites, a Duo Album Greater Than The Sum of Its Parts, due out November 4, 2022 via Sunnyside Records

When the musical partnership between a vocalist and a pianist rises to the level of equal collaboration, something truly special can occur. This rarefied relationship has produced some of the great duos in jazz—Billie Holiday and Teddy Wilson; Norma Winstone and John Taylor, Bill Evans and Tony Bennett, Ran Blake and Jeanne Lee, and more recently Kurt Elling and Laurence Hobgood. Aubrey Johnson and Randy Ingram share this special collaborative partnership, as documented on their beautiful new recording Play Favorites, due out on Sunnyside Records on November 4, 2022.

Upon arriving in New York after his graduation from the New England Conservatory, Ingram found work and gained experience working with vocalists, honing his skills as an accompanist and arranger. As his career developed, Randy’s focus shifted to his work as a composer and bandleader, recording three critically acclaimed records for Sunnyside (Sky/Lift, 2014, The Wandering, 2017, and The Means of Response, 2019) and touring worldwide with his trio and in duo settings with bassists Drew Gress and Matt Brewer.

Johnson, a fellow NEC graduate and New York transplant, is known for her uncanny ability to seamlessly navigate complicated melodies and improvisations, as well as to deliver a lyric with gorgeous expressivity. Among the 40+ albums Aubrey has contributed to as a side-person are Bobby McFerrin’s Grammy-nominated VOCAbuLaries and Lyle Mays’ Grammy Award-winning Eberhard. Her debut recording, Unraveled, which features her compositions and arrangements was released on Outside In Music in 2020.

Johnson and Ingram met in 2015 while serving on faculty at a jazz camp near the Catskills in upstate New York. The two were paired at a faculty recital and were instantly impressed with one another, quickly discovering that they shared an uncommon level of musical comfort, support, and respect. They developed a great friendship and began to pursue regular performances as a duo. Early on they found that their duo was an ideal setting to explore interpretations of their favorite songs, and a welcome alternative to their roles as composers and leaders of their respective bands. Over time, they gathered selections from their mutual interest in the Great American Songbook, jazz compositions, popular music, and the music of Brazil. Johnson’s experience singing a wide variety of genres, and her detailed study of Portuguese helped to ensure the two had a wide range of repertoire from which to choose, while their experience as composers helped to create unique arrangements and reworkings of music they loved.

Preparation for the recording of Play Favorites amplified their search for material, as the two met for frequent listening sessions to audition music that was meaningful to them from a broad variety of genres. Eventually they settled upon a collection of songs they would take to Big Orange Sheep studios in Brooklyn at the end of May 2022, with Michael Perez-Cisneros as their trusted engineer. Produced by Ingram and Johnson, Play Favorites is masterfully mixed and mastered by grammy winner Rich Breen.

Play Favorites begins with Billie Eilish and Finneas O’Connell’s “My Future”, which Johnson had fallen in love with through her students at Berklee College of Music. The song’s message of empowerment and self love resonated with the duo and inspired a creative adaptation of the pop song to a jazz format, amplified by Ingram’s revamped set of colorful harmonies. Lerner and Loewe’s “If Ever I Would Leave You” had long been a favorite of both Ingram and Johnson, and here their reading is adventurous, inspired by Sonny Rollins’ interpretation from his 1962 recording “What’s New”. Johnson shows her ability and comfort in not only delivering a lyric but also creating beautiful and captivating melodies while improvising.

Ingram’s haunting and meditative “Prelude”, the only original composition on the album, is an homage to the collaborations between John Taylor and Norma Winstone. Johnson’s ethereal wordless vocal sets up the ideal mood for the duo’s interpretation of Ralph Rainger and Leo Robin’s “If I Should Lose You”, reborn in their expanded, double time arrangement that heightens the song’s poignancy and lyrical emotion.

Johnson and Ingram’s mutual affection for Joni Mitchell led them to “Conversation”, the songwriter’s fantastic tune about being attracted to someone already in a relationship, from her beloved 1970 release Ladies of the Canyon. Antonio Carlos Jobim’s “Olha Maria” is presented in a sort of suite with Jimmy Webb’s bittersweet “Didn’t We”, linked by a beautiful and heartbreaking free-form solo by Ingram. Another Jobim classic “Chovendo Na Roseira” is a piece the two each knew and loved. Their open, rhythmic version takes cues from an arrangement by Luciana Souza, and provides ample space for Ingram to showcase his improvisational skills.

The duo pays homage to Johnson’s late uncle and mentor Lyle Mays with a version of his beloved “Close To Home” that features seldom-heard Portuguese lyrics under the title “Quem é Você”. Johnson’s and Ingram’s stripped-down performance is heartfelt and spontaneous while maintaining Mays’ original intent.

Lennie Tristano’s “April” (a contrafact based upon the standard “I’ll Remember April”) had long been a favorite of Ingram’s since discovering it on a formative Lee Konitz recording. Knowing Johnson loved to sing “I’ll Remember April”, and that she would be able to deliver the challenging line with aplomb, he suggested the duo work on ways to pair the pieces, eventually coming up with a playfully complex arrangement with many key changes.

Robert Wells and Mel Torme’s “Born To Be Blue” gets reworked into a moody but sophisticated blues inspired by John Coltrane, as well as the vocalist Helen Merrill. Toninho Horta’s “Bons Amigos” is radiant and embodies much of what the pair adore about Brazilian music—lilting melodies, colorful harmonies, and poignant lyrics. The recording concludes with Chase, Whiting, and Robin’s “My Ideal”, one of the duo’s stalwart tunes that they reworked into a lilting waltz.

Play Favorites is a gorgeous portrait of Aubrey Johnson and Randy Ingram’s deep and unique musical partnership. In challenging themselves to scale back from their usual roles as composers and bandleaders they’ve created a record that is resonant, distinctive, and profoundly honest.