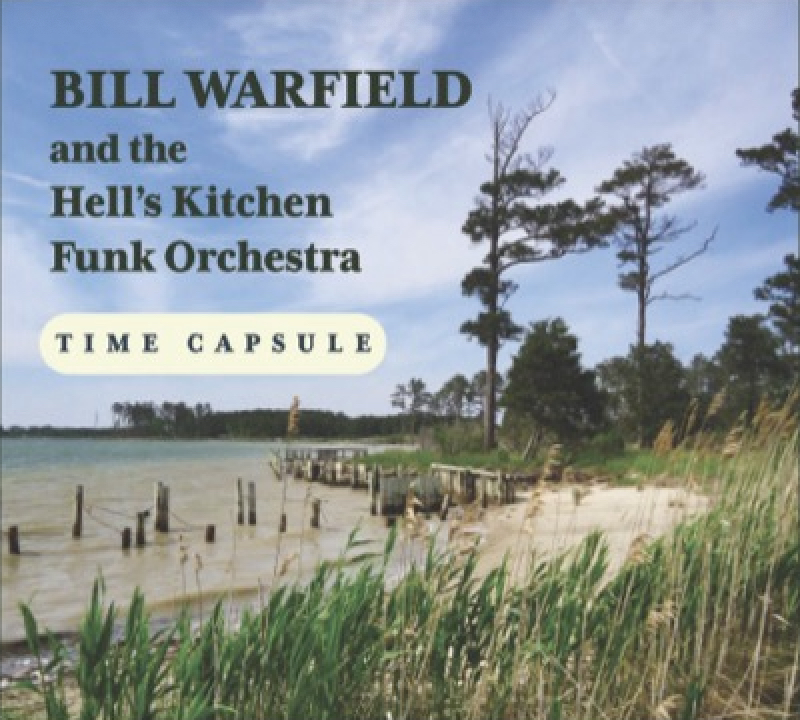 Bill Warfield Embraces His Eclectic Musical Path alongside The Hell’s Kitchen Funk Orchestra with on Time Capsule, due out February 3, 2023 via Planet Arts

Trumpeter and composer Bill Warfield has entered a period of tempoed reflection, taking his critically acclaimed ensemble, The Hell’s Kitchen Funk Orchestra, along with him for their latest output – Time Capsule. Due out February 3, 2023 via Planet Arts, the 12-track recording finds the trumpeter amidst a rhythmic awakening and reflective endorsement of some of his greatest musical influences. Time Capsule presents like an orchestral memoir, deviating from categorization and cultivating a comprehensive overview of Warfield’s stylistically vast but sonically familiar repertoire. Bonding with intention and response, Warfield orchestrates the impact each selected tune has had on the direction of his artistry while sharing a record that is above all else, autobiographical.

Over the past decade, Warfield has issued three records alongside his Hell’s Kitchen Funk Orchestra. On Time Capsule, he assembles a new iteration of the orchestra, placing, as he describes, a fervent emphasis on “the power of the horns.” Warfield’s arrangements explore their shapeshifting quality as they form and reform around each selection, becoming a gospel choir, a syncopated pulse, lush Broadway overtures, harmonic pads for solo gestures, shouts and melodic leads.

“My interests are so varied,” Warfield explains. “I love classical music, I love commercial music. With this band and these horns, I can do anything I want. I have the tools to do everything.” Listening to someone’s life requires vintage, track-by-track attention. Warfield invites listeners to play the entire album sequentially and appreciate each song’s enduring virtue and their collective imprint on his music.

Warfield commences Time Capsule with an arrangement of Billy Taylor’s “I Wish I Knew.” After arranging the track for Nicole Henry in 2014, Warfield noted his focus on Nina Simone’s treatment of the song as an anthemic, vulnerable Civil Rights lament in response to anti-Black racism. What he learned from Henry would change his own connection to the song; she found a secondary meaning in the lyrics, depicting the narrator as someone who has bipolar disorder. Here, Chrissi Poland provides an arresting delivery of these nuanced interpretations on “I Wish I Knew How It Would Feel To Be Free.”

Warfield pays tribute to Chick Corea’s Return To Forever on his second track, “Light as a Feather.” As a college student, he learned to play flute for a small band that frequently played music by Return To Forever, with the exception of the inaugural record’s title track. Warfield’s arrangement on Time Capsule captures a live performance at the Zoellner Arts Center of Lehigh University, where he currently directs the jazz studies program.

An homage to his early childhood, “Alfie,” is a sentimental inclusion of Warfield’s musical origin story. When he was 12, his mother brought home a fake book titled 20 Blockbuster Hits for Piano so he could learn the melodies on trumpet; the first tune in the book was “Alfie.” With this new arrangement, he seeks to capture his own abiding impression of Dionne Warwick performing live alongside Burt Bacharach, the two artists reconnecting after their decades-long musical partnership.

Pedaling back to when he picked up R&B in high school, Warfield reimagines James Brown’s “Cold Sweat,” offering room to feature nearly every soloist. “When ‘Cold Sweat’ hit the scene, every drummer in Baltimore was killing themselves trying to play what Clyde Stubblefield was doing. We thought it was the coolest thing we’d ever heard,” Warfield adds.

The Temptations remain sanctified in Warfield’s musical canon. He reflects his steadfast reverence for the group, with whom he’s performed countless times over the course of his career, through his orchestration on the lyrically-amended “Just My Imagination.” “They were special. A once in a lifetime occurrence, the original band.” His intention for Time Capsule was to record an arrangement that might provoke the Motown sound. “I wanted to make it sound as if it were recorded in Detroit at Motown, with the live horns and that kind of vibe.”

Over the course of finding his voice as an artist and arranger, Warfield cites Weather Report as a rippling influence on his musical perspective. His connection to “Man in the Green Shirt” comes from both the music and its surrounding story. “The title references the cover of Milestones that came out in the late ‘50s,” he says. “The image shows Miles Davis sitting on a stool wearing a casual green shirt. This was a big todo in the industry because, in their eyes, everybody was supposed to have a tux on or wear some kind of show clothes.”

Warfield casts a sentimental mood on “Please Send Me Someone to Love” another song he arranged for Nicole Henry, while on “Zoe’s Dance” he jumps into the blues, reconfiguring and re-titling Mike Sweetman’s 1995 track “Angela’s Strut.” “It’s always reminded me of those ‘60s boogaloo tunes, which I love,” he says.

Time Capsule becomes whimsical on “Finale/Let It Go” from Frozen, inspired by Poland’s YouTube performance of the Disney track. Experimenting with the song as a cliff dive into what would become a strong musical partnership with the Broadway singer, Warfield asked Poland to approach each tune on the record with the same abandon she uses on the Disney hit.

Composed in 13/8, Hank Levy’s arrangement of “Chain Reaction” became a favorite tune for Warfield to play while at Towson University. On Time Capsule, he adds his own overdubs to provide the feeling of a big band sound. With reverence and appreciation, this selection holds a deeper meaning for the bandleader, too, as he remembers Paul Cridler — the first trumpet player ever to solo on Levy’s arrangement — who passed away in spring 2022. Several weeks earlier, Warfield’s brother John also passed away. Whenever it was within arm’s reach, Warfield recalls how John would pick up his flugelhorn and flawlessly play the song’s intro line. Warfield dedicates this album to his brother’s memory.

In his present observations, Bill Warfield remains connected to his past. How he views his instrument today, what he brings to new arrangements — these refinements honed over time not arbitrarily but in relation to where he started. “Your first effort, and I think this is pretty much across the board from Charlier Parke to Charlie Watts, is the purest one,” he says. “It may not be the ‘best’ one, but it’s the one that has the core of what your idea was. And that would be the very first album that I did a long time ago.” Time Capsule may, at times, depart from that core concept, but never unbinds from it. “These tunes are a part of me. They’re a part of my experiences and they are my expression. I hope listeners hear the thread of their meaning and appreciate them as I do.”