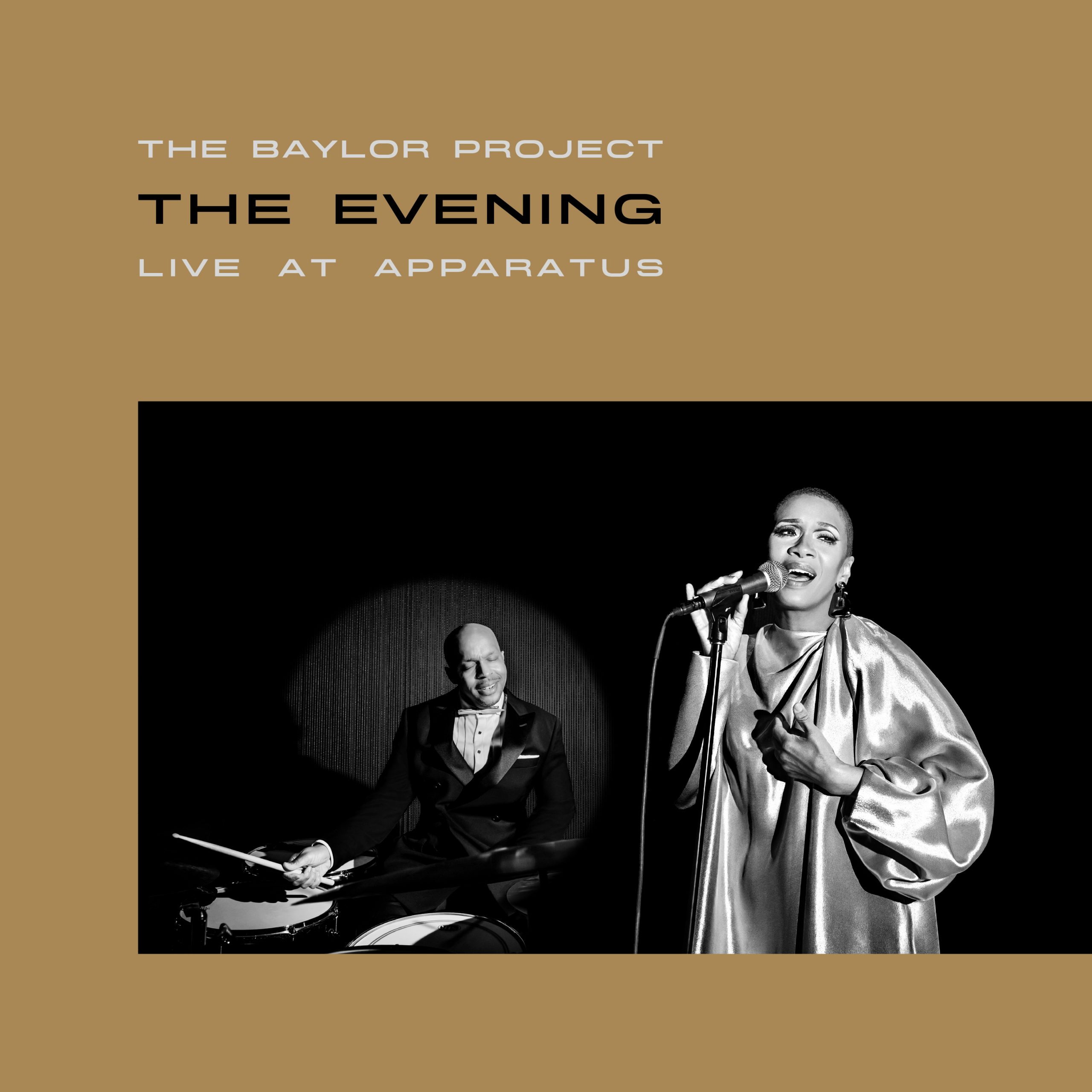 Be A Light, in collaboration with Motown Gospel, proudly announces the September 2, 2022 release of The Evening : Live at APPARATUS, a new live album from 4x GRAMMY® nominated duo The Baylor Project. This immersive, soul-stirring set was recorded in front of an engaged live audience at APPARATUS — an interdisciplinary design studio in New York City. For three magical nights, the indomitable couple and their exceptional band graced the stage at MUMS, an ephemeral jazz club created within APPARATUS’ gallery. The Evening : Live at APPARATUS displays the transformative power of performance, in a presentation of both style and substance.

The Baylor Project’s outstanding live performances have brought audiences to their feet all over the world. Whether performing at a world-class festival for thousands of concert goers, or for a small attentive audience in a tucked-away club, these married musical partners have been known to put on a show that is both uplifting and transcendent. As the children of pastors, Marcus and Jean saw the sublime, restorative power of music first-hand and this rich life experience comes through in their magnificent live shows, where audience members often leave feeling like family.

Their commanding performance captured the attention of Gabriel Hendifar, the Artistic Director of APPARATUS, whose design practice explores the relationship of lighting, furniture and objects in their environment. Hendifar’s latest collection, titled Act Four, took inspiration from cultural touchpoints of the 1960s and jazz music of the era. He knew he wanted to design a jazz club to celebrate the collection launch during New York Design Week, but he needed the final piece: the musical muse to bring the entire concept together. When Hendifar’s team stumbled upon a video of The Baylor Project’s vibrant “We Swing” he knew he had met his match.

He named the jazz club MUMS, after the thousands of peach-colored chrysanthemums that tastefully adorned the dimly-lit space. Light fixtures that managed to be both retro and contemporary glowed beyond the bandstand, as the light chatter of an excited, well-healed audience filled the room. When Jean Baylor, dressed in a striking mod-era golden sheath dress came to the stage with her smartly dressed counterpart Marcus, followed by their stylish band, it became abundantly clear that this would be a night to remember.

The room immediately warmed to the group which included pianist Terry Brewer, saxophonist Keith Loftis, trumpeter Darren Barrett, trombonist Mark Williams, and bassist Yasushi Nakamura. Marcus immediately set the mood on The Evening : Live at Apparatus with his inviting call to worship on “Our Love Is Here To Stay,” before Brewer shines on a solo piano feature, titled “Lord Keep Me Day By Day” which launches into their fan favorite reimagination of the hymn “Great Is Thy Faithfulness”. The beautiful arrangement showcases Keith Loftis on a fiery soprano saxophone solo.

Marcus is featured on the drum solo interlude “Call of the Drum”, which, over nearly four minutes, chronicles his vast musical journey from playing in his father’s church in St. Louis to his experiences playing with jazz icons Yellowjackets and Kenny Garrett. This moves into “Tell Me a Story”, a lyrical remake of Herbie Hancock’s “Tell Me a Bedtime Story”. On “Tenderly” Jean takes her time with the warm embrace of this old standard, before stepping into “We Swing (The Cypher)”. Having first appeared on Generations and named one of the Top Tracks of 2021 by NPR Music, Jean sings the parts previously sung by Jazzmeia Horn and Dianne Reeves on this exciting rendition as she whips the crowd into a frenzy. The energy transfers to the slower pace of “Love Makes Me Sing”, as the delighted audience sings along.

The pace changes on the contemplative and powerful “2020”, which is a bluesy prayer sung in the spirit of the Negro Spritual. A somber reflection on modern racial oppression, the energy in the room is palpable throughout this striking highlight. The set concludes with the affirming sendoff “Only Believe”. “Laugh and Move On” is the tasty bonus track, and features some notable three-part harmony with the horn section.

The setlist performed at APPARATUS pulls from The Baylor Project’s previous releases including their 2017 debut The Journey, which debuted in the top ten on the Billboard Jazz Chart and went on to garner two GRAMMY® nominations (for Best Jazz Vocal Album and Best Traditional R&B Performance for their song “Laugh And Move On”). Generations, which was released last June, gained them a fourth GRAMMY® nod (in 2020, their pandemic-era anthem “Sit On Down” was nominated) and won the NAACP Image Award for Best Jazz Vocal Album topping the Jazzweek Radio chart.  Both albums have received worldwide commercial and critical acclaim. Jean and Marcus are thrilled to add a live album to their growing discography.

“We create moments that feel like mirages,” says Hendifar, describing the experiences he creates to celebrate the launch of a new collection. “They are here for a moment in time, and then they’re gone. We invite you to step into a dream and part of the magic is that it’s only going to happen once – the dream disappears.” Fortunately, The Evening : Live at APPARATUS preserves a taste of that magical weekend, and invites us all to revel in it.