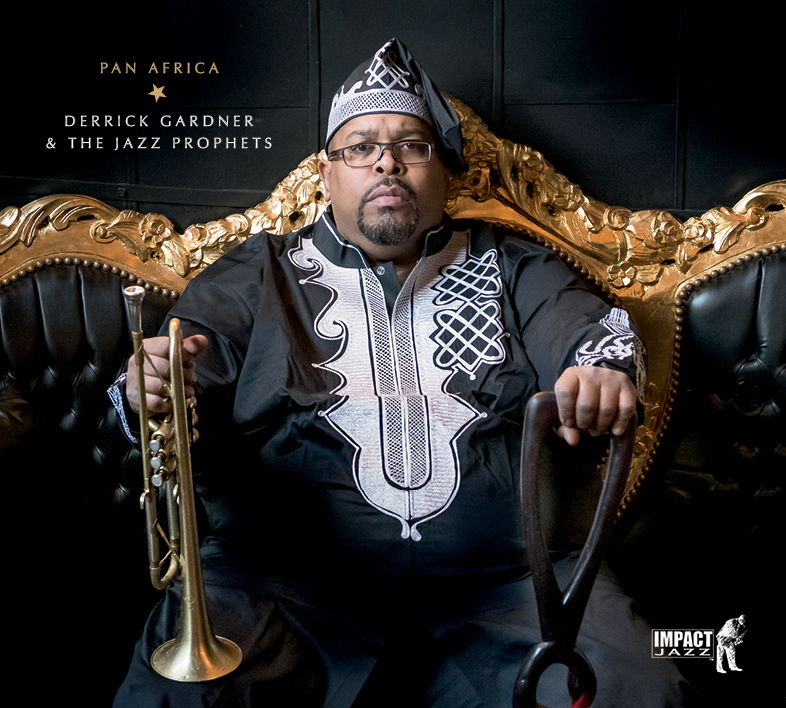 Impact Jazz is proud to announce the January 13, 2023 release of Pan Africa, a groundbreaking artistic endeavor by trumpet great Derrick Gardner and his steadfast ensemble the Jazz Prophets. Inspired by a life-changing visit to Ghana, Gardner pays homage to his ancestors on this riveting release, rooted in the spirit and traditions of the African diaspora. An unerring emphasis on African rhythm lies at the center of each track of Pan Africa, displaying the Jazz Prophets’ stellar integration of the language of jazz and of its parent — traditional African music. On Pan Africa, Derrick Gardner is joined by his brother, trombonist Vincent Gardner, alto and tenor saxophonist Robert Dixon, pianist George Caldwell, bassist Obasi Akoto, and percussionist Kweku Sumbry on the drum kit and African percussion.

It was the summer of 2021 and Derrick Gardner found himself traversing the coastal savannas of Ghana amidst a five-week tour with the Jazz Prophets, Gardner’s long-standing sextet since 1991. Between performances, Gardner visited important historical sites relative to the transatlantic slave trade, Ghanaian independence, and the Pan African movement. This had a profound effect on him, and served as the genesis of Pan Africa.

The resulting nine tracks strive to honor different facets of the African diaspora. A rhythmic motif lies at the center of each track, acting as the pulse, driving and unifying each member of the Jazz Prophets, like six limbs of the same body. Gardner and his bandmates deliver a passionate, fervent performance here. The ancestral connections are palpable and real in the work, where honoring the ancestors is paramount. The album’s first track “Djembe Kan” is a traditional piece highlighting the cultural significance of the djembe, a West African drum, as a means for storytelling and conveying critical spiritual, cultural and historical information. Drummer Kweku Sumbry opens the work with an intricate and unaccompanied performance on the djembe to initiate a welcoming call.

Sumbry continues the solo djembe performance, introducing Gardner’s arrangement of Jackie McLean’s “Appointment in Ghana,” which features blistering solos by the leader, saxophonist and trombonist. The title of the next track, “10,000 Ships,” immediately conjures images of slave ship journals and chilling stories of thousands of Africans packed in dark, cramped hulls. Composer Rob Dixon opens the song with a somber energy, before Caldwell paints the musical canvas with warm, mysterious chords. The horns provide a haunting, harmonized melody on top. Dixon, Sumbry and the bandleader all take searing solos; with each cry from the horn, the bandleader gives voice to the captured Africans and their horrific visions of ships carrying their stolen lineage to another world.

Another standout is “The Sixth Village.” In 2006, the African diaspora was recognized as the sixth region of the African union, along with the north, south, east, west and central counterparts. This swinging tune’s title is inspired by this, and sonically, the song takes cues from these different parts. With Sumbry’s percussion work and Akoto’s bass as the bedrock, this infectious, groovy song conveys the strength and depth of the diaspora. “Blues for the Diaspora” is a minor blues on which Gardner uses his horn to beckon and reflect. Carefully placed harmonies from the saxophone and trombone buttress the haunting melody, and convey a sense of mourning for the ancestors.

The album’s final track “Assin Manso … The Last Bath” was written in tribute to Assin Manso, a city located in the central region of Ghana. The city contains the Assin Manso River where captured Africans took their final baths on African soil before being marched to the Ghanaian slave dungeons of Elmina and Cape Coast. Sumbry finishes the song with djembe and drums, concluding the album on a reflective note — at once celebrating the vibrancy of Africa and remembering the atrocities that took place at its shores.

For over thirty years, Derrick Gardner has been an inimitable force in the jazz world, with a long list of associations that includes luminaries such as Frank Foster, Dizzy Gillespie, Nancy Wilson and Clark Terry. Gardner has been regarded as a prominent bandleader ever since his 2005 debut with Slim Goodie. He has also received international acclaim for his 18-piece ensemble Derrick Gardner & The Big dig! Band. Formed in 2014, the Big dig! Band remains a prominent fixture on the jazz scene, highlighted by their critically acclaimed 2020 recording debut Still I Rise. Earlier this year, Gardner was named Interim Director of Jazz Studies at Northwestern University in Evanston, Ill. (the Bienen School of Music).