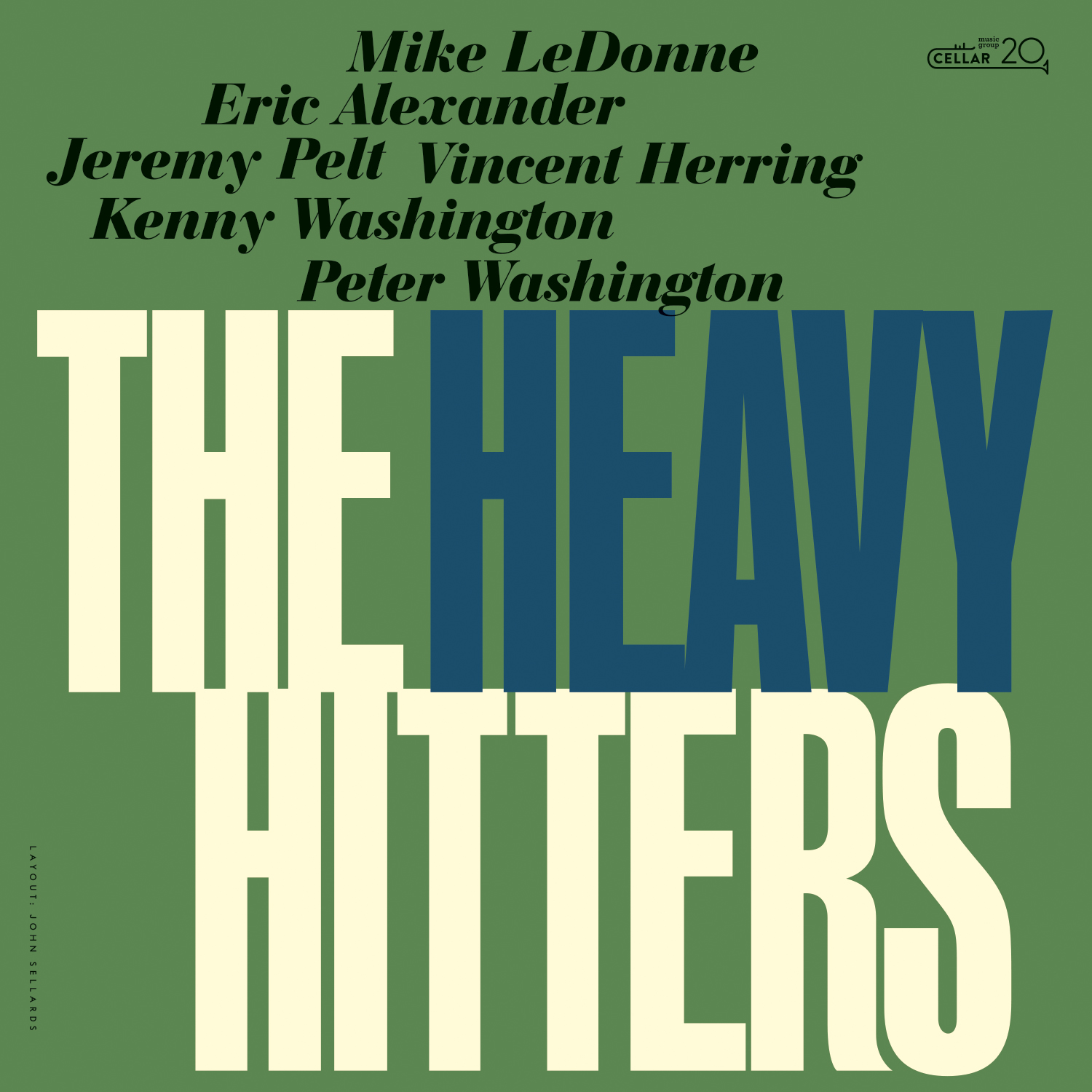 Cellar Music Group is delighted to announce the January 20, 2023 release of The Heavy Hitters, the eponymous album from a brand-new sextet featuring some of the most established players in the jazz game. Co-leaders Mike LeDonne (piano) and Eric Alexander (tenor saxophone) present nine compositions calling upon the timelessness of old Blue Note sounds through a vibrant and formidable all-original collection. The pair is joined by Jeremy Pelt (trumpet) and Vincent Herring (alto saxophone) on frontline duties, aided by backline support from Peter Washington (bass) and Kenny Washington (drums). Coming together for their first date as an ensemble, The Heavy Hitters show their deep knowledge of the jazz tradition, to which they add a classy, life-affirming 21st Century touch.

The group is led by Mike LeDonne, New York-based bop pianist best known for his sideman work with Milt Jackson and Benny Golson as well as his huge selection of leader and co-leader records, mainly for the Savant label. His partner in crime, Eric Alexander (himself a first-rate soloist working with Harold Mabern amongst others) was his quartet-mate on a well-received series of releases on the Venus label in the mid-2000’s. The two friends came together for this, their first sextet release as leaders, featuring a set composed entirely of originals.

The Heavy Hitters project began with the express intention of emulating some of their jazz heroes, with a modern-day twist. “It’s not to look back, but to say ‘this is still relevant because this is happening right now. It’s pretty much what we’ve been doing our whole lives,” the group says about their philosophical approach to tradition. There are various nods to that history, from track titles referencing various jazz titans, to the album art, which evokes Reid Miles’ classic Blue Note graphics. “And of course, we got to record it at Rudy Van Gelder’s studio,” they add. “It’s a place we’re so lucky to still have up and running, and that is putting out the same great sound we’ve loved all these years. To us it’s a true ‘jazz’ sound.”

Many of the tunes began as homages to the jazz masters; opener “Hub,” for example, is a tribute to the trumpeter Freddie Hubbard. “As a player, he was the toughest, and his writing was at the very highest level,” begins LeDonne. “The introductory figure of “Hub” is Freddie in a nutshell.” Cracking into the tune reveals a slew of varied solo statements, from the runs of Mike LeDonne, to the thrilling squeezes of Jeremy Pelt, and a dancing solo from Jeremy Pelt. The theme of homage continues with LeDonne’s “Silverdust,” a crowd-pleasing classic. “Horace was the first to focus on bringing jazz back to the people,” LeDonne says. “He was super hip, but he based everything on having a funky dance feeling to it, with plenty of blues and soul,” a target the group hits with their studied soul inflections and deep-sitting groove. Squeezed in between the two is the charming waltz “A New Day,” a chance for Alexander to enthusiastically deploy his reams of bop language.

LeDonne continues the theme of tributes with a hat-tip to his friend, the great Cedar Walton, who bonded with LeDonne having also shared the sideman duties for the Milt Jackson Quartet. “Cedar Land” nods to Walton in more than just the title. LeDonne adapted the chords from Walton’s standard “Holy Land,” with LeDonne playing a starring role. LeDonne’s compositional contributions conclude with “Un Dia Es Un Dia,” (roughly translated as “a day is a day”) an up-tempo Latin number in the Getz/Gilberto lineage.

Tenorist Eric Alexander contributes three tunes – “Big Richard,” dedicated to his father who died in 2017, “Chainsaw,” one long funky minor blues, and “This Is Something New.” The idea for the last tune came from a George Coleman chord progression that always cried out for a melody. “I simply put the top extension notes of each chord that he dictated to me at the top of the horns’ three-part harmony, and that became the melody,” Alexander explains. The album wraps up in joyful fashion, with the effortlessly stylish “Bluesit.”

The record is born from the close-knit relationship built by LeDonne and Alexander over a 25-year period. “I consider Mike a close confidant,” Alexander concludes—this record is the sound of personal and musical confidants working in tandem.