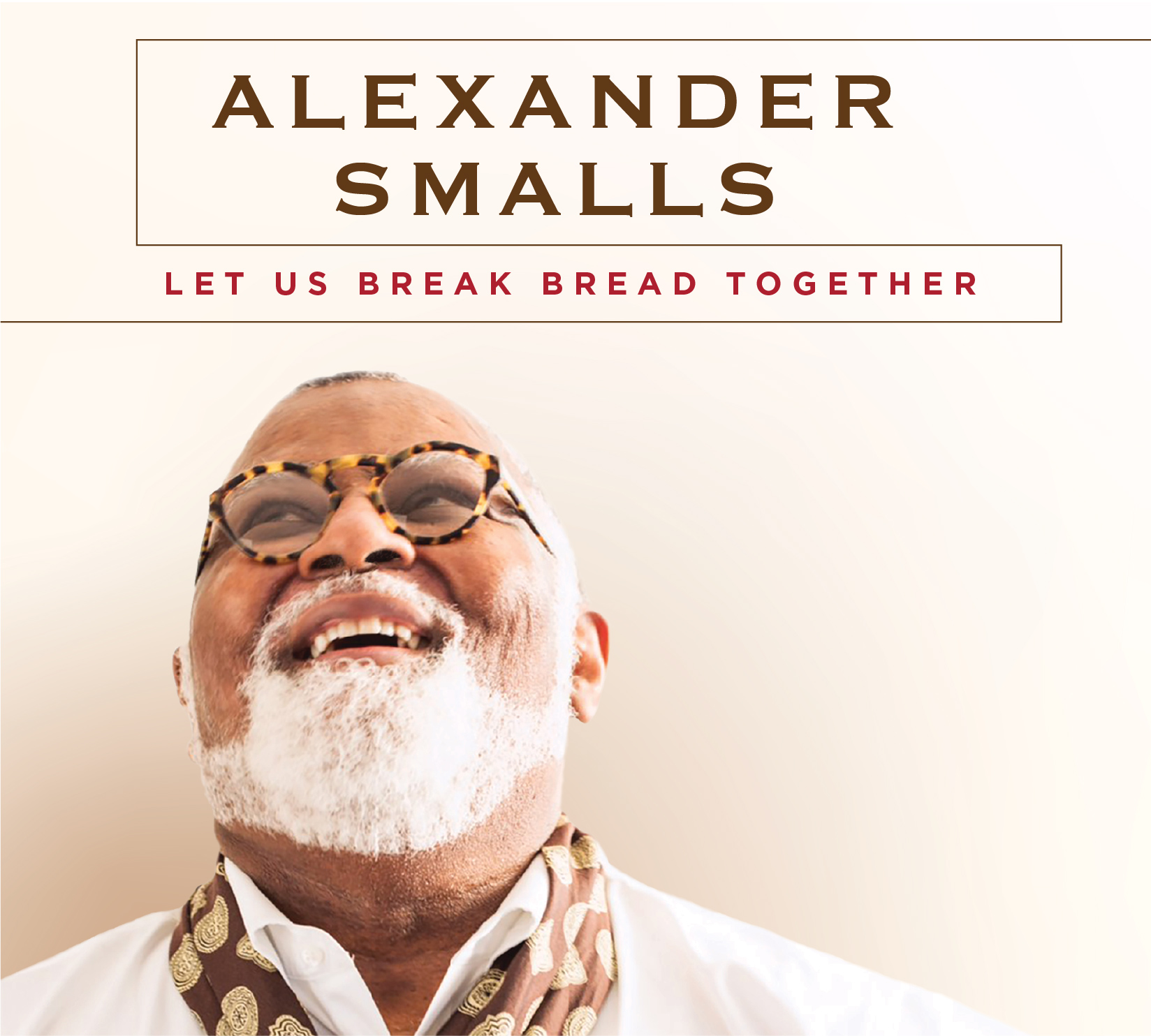 Internationally lauded culinary artist and singer Alexander Smalls issues Let Us Break Bread Together, due out June 10, 2022 on Smalls House Productions, his new collaborative imprint with Outside in Music. Let Us Break Bread Together marks Smalls’ first release in a series of curated works honoring the cultural sanctity and richly complex tradition of the African American Spiritual. For the past three decades, the world-renowned chef and author has earned accolades across the globe for his unbound creativity in and outside the kitchen, receiving praise from Food & Wine magazine and The New York Times.

Before crafting a now-storied career for himself as a chef and restaurateur, Smalls performed around the world as a highly sought opera singer. Resounding and meticulous command of challenging material earned him international attention, as well as both GRAMMY and Tony Awards for his contributions to the Houston Grand Opera cast recording of George Gershwin’s Porgy and Bess in 1977. Now, after more than 30 years away from the microphone, the James Beard awardee and acclaimed baritone returns to the studio a seasoned, exploratory musician, eager to translate the power of a musical canon he considers generationally resonant yet endangered.

“I chose to create a recording of the Negro Spiritual because it is probably some of the most misunderstood music on the planet,” says the South Carolina native. “It was created out of the need to fulfill something extraordinarily important to African people that was taken away from them which was their tribal music. Their songs, their drums, their dancing — anything like that frightened their slave owners. All they were allowed to do was sing religious music. They weren’t allowed to read, so they were read scriptures and taught bible verses and European hymns. And in their uniqueness and their clever way, they took the scriptures, the psalms, the biblical stories, and they translated that into their folk tunes, their heritage music and essentially created a whole new tribal ritual under the umbrella of Christianity. I want to bring this music back to the foreground, to the lives of everyday people who can appreciate it as I do.”

“Think about the richness of a melody,” says Smalls. “Think about how a melody starts in one’s soul, one’s mind, one’s spirit. People bring these extraordinary sounds sometimes from the depths of who they are — it’s like a moan that aches. And the beauty of that is, once you have this extraordinary melody, then you can really start to build a symphony of ideas — sounds and scapes and collisions of the human experience. There is nothing greater.”

Smalls’ artistic impulse is one of exploration and curation. Whether he’s inside the kitchen or behind the microphone, his creativity celebrates individual and cultural contributions of the African Diaspora, and a shared ancestral heritage. As he issues his inaugural series release, Smalls is busy unveiling his newest culinary concept in Dubai: Alkebulan. “Alkebulan was the first written word of Africa, and the original name for Africa until the Europeans arrived and couldn’t pronounce it,” says Smalls. “It means Garden of Eden, Mother of Mankind. But Alkebulan is not just a dining hall; it is a curated artistic engagement where culture, food and drink — music, fashion and art — defines the legacy of a people. You learn, through this immersive environment, the influence of Africa on history and the world. It’s quite extraordinary.”

That compulsion to curate and unite pulses across Let Us Break Bread Together. In addition to arranging hymns and traditionals such as “Wade in the Water,” “Poor Little Jesus Boy” and album title track, Smalls and his fellow artists spotlight contemporary African American standards such as Sonny Rollins’ “St. Thomas” and Herbie Hancock’s “Watermelon Man.” In the tradition of Miles Davis on Milestones, the seasoned tenor refrains from performing on certain tracks, allowing sacred instrumental moments to develop and linger. “There came a time when I realized it was okay not to be the musician on stage but to be part of the production that brings music to the stage or keeps it alive in some way,” he says.

That realization, in part, led to a years-long partnership with Owens, his friend and artistic collaborator whom he met one night at Minton’s, where Smalls had launched the revived club’s award-winning sister restaurant The Cecil in 2013. When a young artist introduced them, their affinity sparked. “He and I had the most immediate intense connection. I just thought he was one of the nicest, most personable people I had ever met. His energy was otherworldly,” says Smalls, who then tapped Owens to create the club’s cutting-edge programming. “There’s nothing like sitting down with somebody who is action-oriented like you are.”

Smalls had been conceptualizing a cataloguing of the African American Spiritual for years. “I’ve long since transitioned into activist and advocate,” he says. When he felt the time had come to move on the project, Ulysses was at his side, along with Sadin, another esteemed collaborator and GRAMMY Award-winning industry legend whom Smalls had met decades earlier through friend and former colleague, revered soprano Kathleen Battle. Owens and Smalls feel honored to have transformed Let Us Break Bread Together from concept to reality working alongside the visionary titan who has produced across genre lines, including projects for Battle, Wynton Marsalis, Herbie Hancock, Wayne Shorter, Marcus Roberts, Sting, Placido Domingo and Florence Quivar. “Bob is a musician’s musician,” says Smalls. “Brilliantly talented, brilliantly crazy. What he brings to the expression — of any music — is unique and extraordinary.”

Returning to the studio to record Let Us Break Bread Together has proven curative and exhilarating for Smalls, who spent the early years of his career focused on a disciplined execution of sound. Today, he’s focused on the heart of intention. “Now, I’m more interested in, ‘Did I make the musical statement I wanted to make? Did I interpret the emotion? The expression?’ I don’t hear the note as much as I feel the note. The only kind of barometer I have is, ‘How did it feel to me?’ Sometimes, the musical expression is as much of a surprise to me as it might be for my audience [laughs]. It’s a whole new mindset.”

Smalls House Productions is an imprint of Outside in Music created in collaboration with acclaimed chef, restaurateur, and vocalist Alexander Smalls. Smalls House Productions provides an outlet for musicians to honor and preserve the cultures and traditions of African American music while simultaneously developing a lasting oeuvre for the present and future.