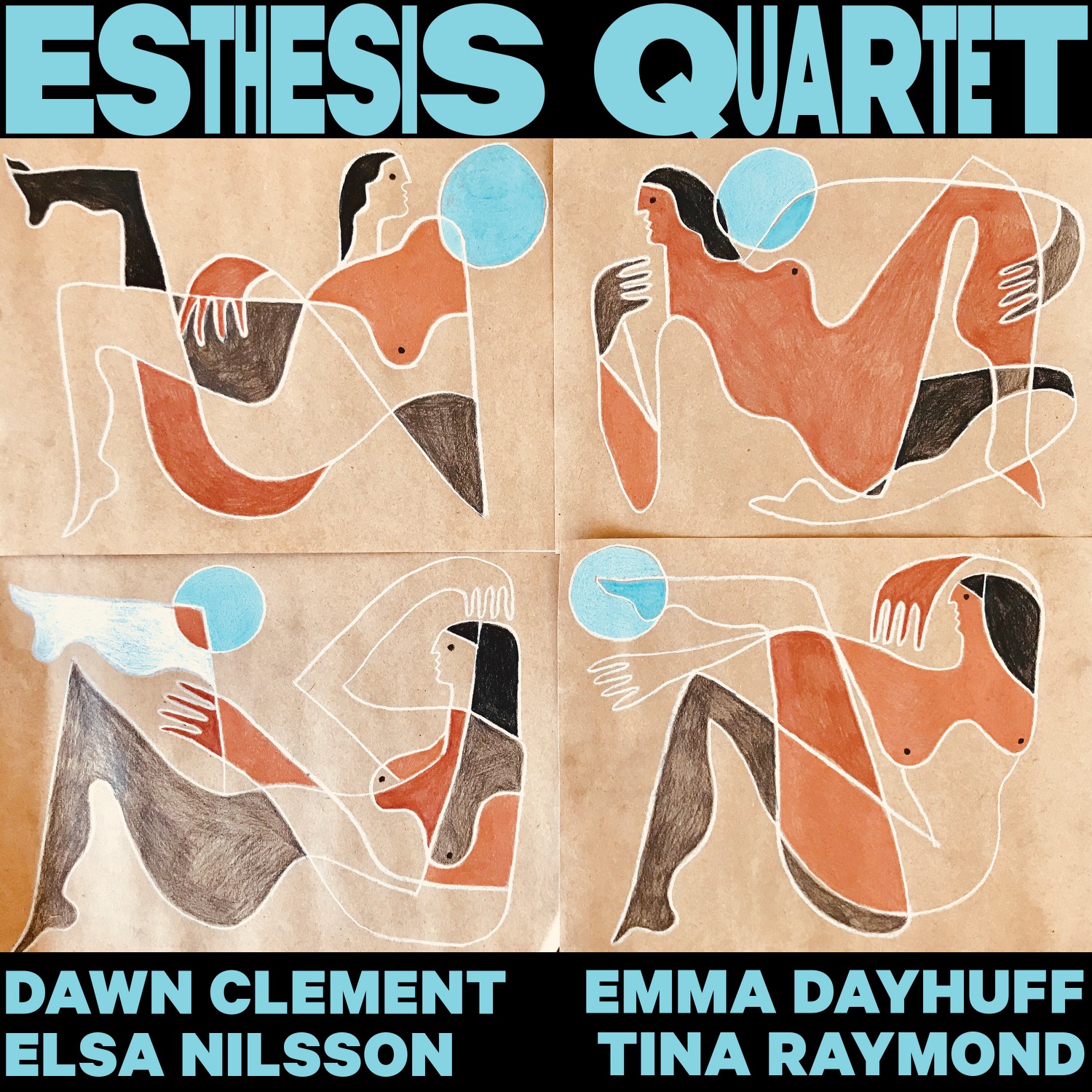 The Esthesis Quartet Pronounces Itself on a Sensory, Whimsical and Expansive Self-Titled Debut Release, due out May 27, 2022 via Orenda Records

Orenda Records is proud to announce the May 27, 2022 release of Esthesis Quartet’s new, self-titled album. Dismantling conventional instrumentation roles, the band unleashes each members’ bend toward the extemporaneous on this debut statement. Uniting four corners of the United States at the cusp of a lockdown period, Esthesis Quartet features Denver-based pianist Dawn Clement, Swedish-born and New York-based flutist Elsa Nilsson, Chicago-based bassist Emma Dayhuff and LA-based drummer Tina Raymond. The assembly is characterized by an innate fascination with risk, uniting four players who continually re-evaluate their roles as soloists, performers and explorers. With original compositions molded by tactile sensitivity and exploratory improvising, Esthesis Quartet captures the meticulous spirit of collaboration integral to the group’s foundations. The reckless abandon with which the quartet approaches the discovery of new musical landscapes lends an intriguing journey, particularly when flutes and vocals come to the fore.

The quartet has the restrictions of the past two years flowing through its DNA. “Esthesis” by definition means “elementary sensations of touch,” something that we were all robbed of throughout the COVID-19 pandemic. The quartet was formed at this time, starting as a creative support group to keep compositions coming and creative juices flowing. After spending many sessions together on Zoom and deciding that connecting in person was safe again, the group members headed to Los Angeles and recorded their first album.

Esthesis Quartet immediately launches into their inimitable, bop-ish style on “Cricket.” Inspired by Clement’s daughter who was referred to as cricket before she was born because of her constant movement. The tune opens with tumbles and darts around the flute and piano as the rest of the ensemble gradually fills the space with a concise melody. Room is left for Dayhuff’s thoughtful soloing and Nilsson’s inquisitive flute contributions, fluid and daring as they move into the timbral world overdriven by electric guitars via the use of a pedalboard.

“Two Moons” was composed to honor Ishaynishus, one of the Cheyenne Chiefs who took part in the Battle of Little Bighorn. Memorialized on James Fraser’s Buffalo nickel, Ishaynishus fought hard to ensure an improvement to the living conditions of the Cheyenne people and is an inspirational figure for the group. The track that results is open and easy, not unlike the spacious music of the UK’s Matthew Halsall. Clement provides some of the requisite fire to keep things flowing, whilst Dayhuff’s rich, wide bass tones shine through.

“Partial” offers something different – a voice, breathy and intimate. The lyrics are a vehicle for conflicting meanings – is it about being seen as only partially a person, or being partial to someone? “Partial” breaks down into a delicately trembling flute rhapsody, which builds to reintroduce a flood of vocals to conclude this deeply affecting track.

“We Watch It All Burn” also responds to a subject, the increasing prevalence and severity of wildfires around the world. What begins as a ritual-like incantation swirls into something more mysterious via Nilsson’s intriguing mix of post-bop language and extended techniques. Clement counters, with glassy textures that splinter into sharply-defined bursts.

The theme of the natural world continues on “The Gardener”, which is influenced by the beauty and simplicity of tending to a garden. The quartet’s sound here is palpable—the rustles and flutters of Raymond’s brushes lead into a roomy grooving bedrock, into which the ensemble plants seeds of ideas. It blossoms as a passionate statement, led throughout by Nilsson’s diverting playing.

There’s a sense of elemental journey to Esthesis Quartet, from the young beginnings at birth to the closing corners of life. Written during the week following the funeral of Nilsson’s father, “Finding What’s Lost” follows the journey of discovering the path back to normalcy after and as one grieves. Pitting light and dark against each other before launching into serene clarity, it’s a fitting close to an evocative album.