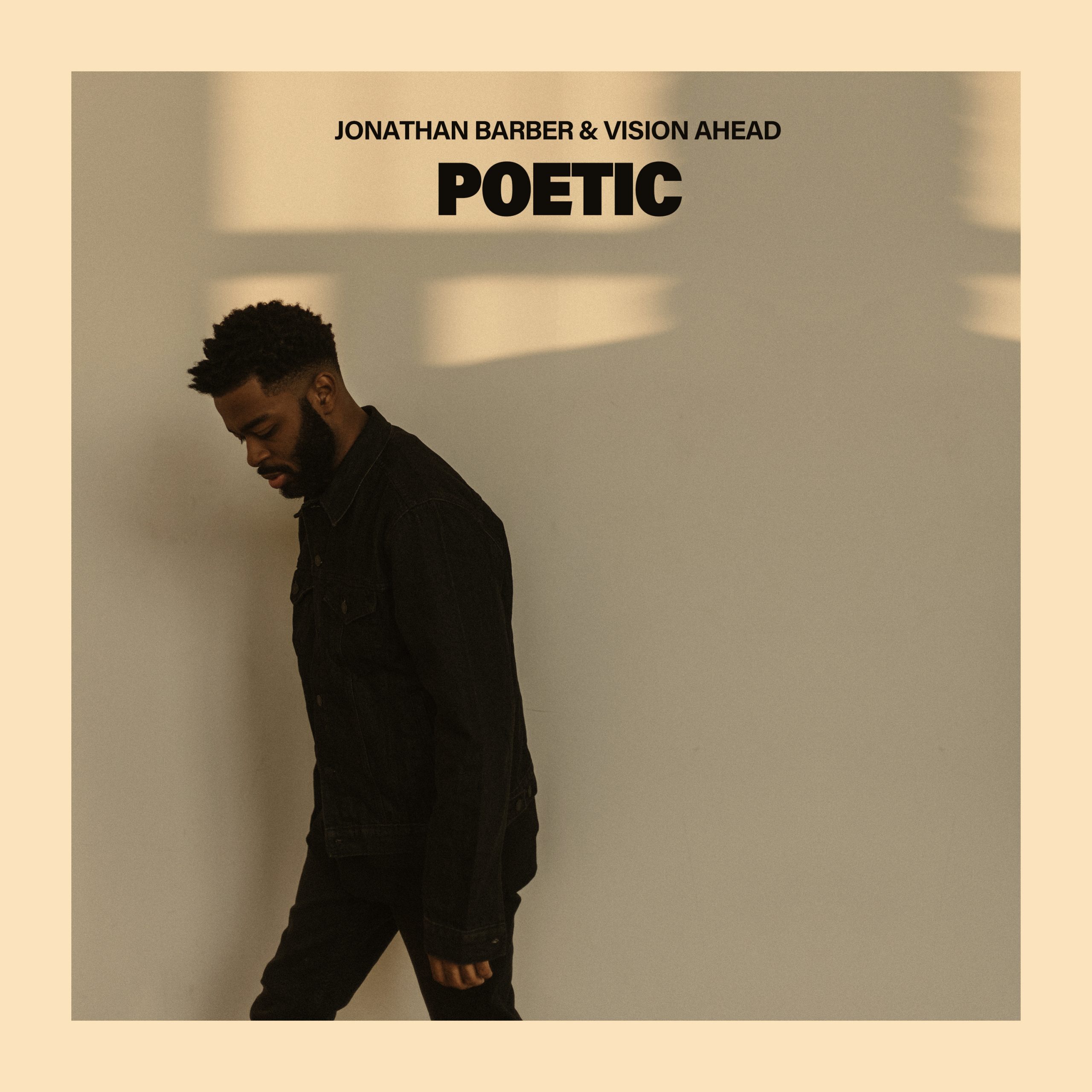 Jonathan Barber & Vision Ahead are pleased to announce the May 13th release of Poetic, their powerful third album. With Poetic, Barber and the group present a dynamic, refined sound; the album showcases not only the stellar musicianship of each of the group’s five members, but the striking cohesiveness of a band of brothers who have performed by each other’s side for over a decade. Revealing another layer of musical depth and conceptual maturity to the ensemble, Jonathan Barber’s latest statement undoubtedly solidifies this ensemble’s stature as a premier group of its generation. Staying true to its original lineup, the cast features acclaimed drummer Jonathan Barber at the helm alongside pianist Taber Gable and bassist Matt Dwonszyk to round-out the group’s first-call rhythm section, with celebrated alto saxophonist Godwin Louis and visionary guitarist Andrew Renfroe making up the group’s front line.

As a response to facing the many trials of the day, Barber exclaims “Creating this album, we (Vision Ahead) reminded ourselves that it is better to push through collectively. In some cases the best way to respond is to gather in one room and record the moment.” These sessions bore fruitful recordings of original compositions by Barber, Renfroe, Louis and Gable. “Although Poetic is an instrumental album, the music delivers melodies that are lyrical.” The album’s tracks show a masterful command of instrumentation, making excellent use of space and dynamics. Incorporating new sonic textures to Barber’s trademark sound, the group makes use of a Fender Rhodes instead of a grand piano, weaving lush, dark colors into the sonic tapestry which seem to coalesce and sometimes meld, though never competing, with Renfroe’s sustained harmony and melodic refrains.

The album’s opening track “Poetic”, begins with the drums and piano laying the harmonic and rhythmic framework for the piece. Barber’s rhythmic feel around the placement of Gable chords is playful and sets the tone of the song. The melody is introduced with many layers as Louis and Renfroe enter following Dwonszyk’s bass-line. Renfroe unleashes sheets of sound over the song’s harmony, channeling Coltrane’s harmonic ethos with a melodic approach and tone that is entirely his own. Louis maintains the intensity and demonstrates his soulful facility on his instrument with a fiery solo.

Barber notes the exceptional maturity of the band’s playing on “Gathering” and how the tune is a great example of Vision Ahead’s development. Composed by Guitarist Andrew Renfroe, this song is a true ensemble piece, featuring everyone in the group. Gable sets the tone with ideas that are responsive to the mood of the song. The Fender Rhodes is glistening with lush chords and each note illuminates like stars in the sky. After one chorus, Gable passes the baton to Louis who brightens the feel of the piece with the delivery of a vocabulary-laden solo. “Each solo carries out the emotion of the songs yet presents it in their own way. “Dwonszyk’s intention with note choice and placement is handled with such prestige” Barber indicates. Down to Barber’s use of a deep low-end snare, every element here helps accomplish a reflective piece that never loses sight of its pulse.

The Godwin Louis composition “Give Us This Day” features melody and countermelody played by Louis and Renfroe respectively. This deeply soulful piece begins with a mellow ¾ feel and then escalates in intensity to a raucous 4/4 shuffle. The groove-centric “Denim”, composed by Jonathan Barber, takes the listener on a hero’s journey through seamlessly shifting feelings that draw from the realms of neo-soul, R&B and modern jazz. Renfroe takes no prisoners with a scorching solo, well-supported by Barber and the rest of the rhythm section. The album concludes with Taber Gable’s “South”. “South” begins with Gable’s statement of the harmony, upon which Louis and Renfroe state the melody. Barber’s rhythmic exploration on this piece, and on the album as a whole, can not be overstated. “You’re not going to find a traditional drum solo from me on this album. I didn’t want to be featured in an isolated moment. Part of my artistry is creating with other musicians. To me every song on Poetic feels like one big drum solo,” notes Barber. Gable and Renfroe each solo and then repeat the melodic motif of the head as Barber’s rhythmic variation intensifies and the sonic palate of the piece expands and then concludes on a high.

As Barber notes “It’s safe to say that playing collectively for over 10 years shows on this album. Jonathan Barber & Vision Ahead is more than a band, it’s a sound!