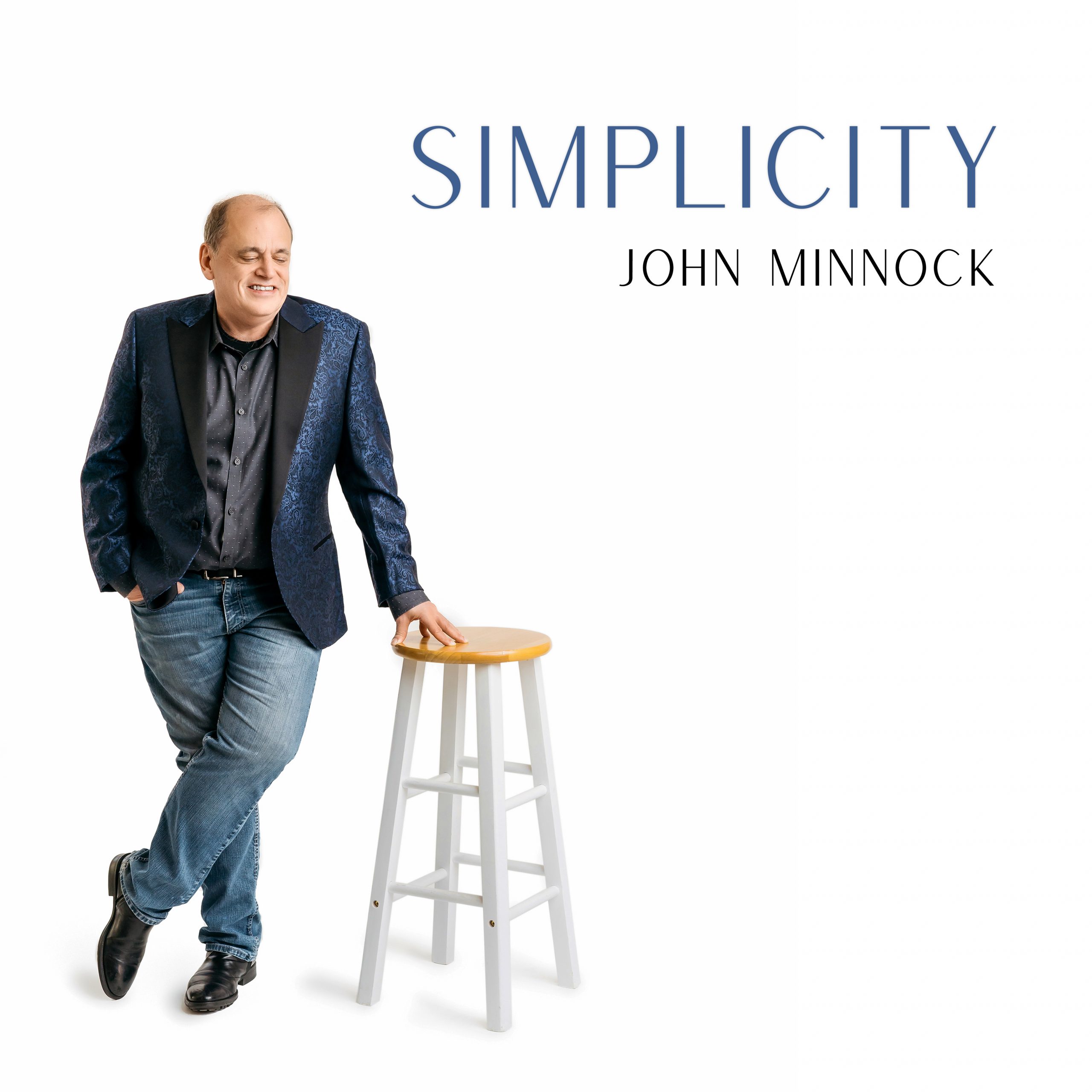 Singer and master song interpreter John Minnock issues Simplicity on Dot Time Records, reprising his artistic partnership with saxophonist-composer and NEA Jazz Master Dave Liebman. Following Minnock’s acclaimed 2020 release Herring Cove, Simplicity signals an evolution of his artistry. Repertoire selections include original compositions and nuanced treatment of familiar songs, each reflecting harmonic sophistication, heartbreaking subtlety and homage to his beloved LGBTQ community. Simplicity will be available on all platforms and as a compact disc on May 20, 2022.

“This record is about the music,” says the recent Hot House/Jazzmobile Best Male Vocalist Award winner. “Once you really get comfortable with jazz, it offers a level of freedom. You can go anywhere you want. The downs can go lower, the ups can go higher. So you have to get really comfortable, but then stick with the story.”

To help translate his frank interpretation across eight songs, the consummate storyteller assembles an intergenerational band of improvisers: Mathis Picard and Sean Mason on piano (tracks 1, 2, 4, 5, 6, 7 and 3, 8, respectively), Mark Lewandowski and Carlos Mena on bass (tracks 2-8 and 1, respectively), Pablo Eluchans on drums and Liebman on saxophone, serving as the project’s executive producer. “Every player brought their A game to the session,” says Minnock. “We were relaxed and comfortable but collaborative and serious.”

The degree of comfort and intensity that composer and EGOT nominee David Shire’s material requires, renders his canon discouraging for many singers, but not for Minnock. He’s an expert at interpreting songs that demand a nuanced communication of music and lyric. For years, the New York native has been exploring Shire’s repertoire, developing an artistic relationship with the songwriter who recently began composing with Minnock in mind. In 2019, Shire attended one of his performances at Don’t Tell Mama in midtown, having just written “After All These Years” for Minnock, which appears on Herring Cove. “He told me ‘Simplicity’ might be an even better song for me,” says Minnock, who tends to explore aspects of Shire’s melodies in unconventional ways.

With Liebman and a cross section of spontaneity-driven artists at the instrumental helm, Simplicity delivers a layering of vulnerability, lyricism and meditative vibe-casting. The title track reveals Minnock’s tender treatment of complex material, and an ability to transmit intention on every note. Stretching Minnock’s stylistic range, “He Was Brazilian” animates a story inspired by Bossa Nova patterns and progressions. “There are so many similarly fun, flirty and sexy Bossa Nova songs,” says Minnock, “and now there’s one for the LGBTQ community.” Solo gestures from Lewandowski and Liebman complement Minnock’s melodic phrasing. “Angel Eyes” introduces a recurring theme throughout the album — extended intros, often including instrumental solos up front. “Everybody should have an intro,” says Minnock. “I like to have all the instruments do something, especially bass because I’m a tuba player. I’m a basement dweller.”

But the concept offers something more abstract and essential for Simplicity. Minnock’s mantra for “Angel Eyes,” and many track selections, emerged over the course of rehearsing and recording: “Just get into the vibe.” Energy as a means of expression and, ultimately, transmission, would become integral to Simplicity. “Sometimes it scares me [laughs], but it is great,” says Minnock who’s accustomed to crafting sets around thematic material derived from lyrics, but welcomes the opportunity for harmonic exploration and musical spontaneity. Liebman’s ability to comp for Minnock serves the singer’s instinct for moment-to-moment interaction. And he always returns to the story. “Cape’s End,” penned by Picard with lyrics from Minnock and Erick Holmberg, becomes an extension of “Herring Cove.” The noir-inspired introduction from Liebman that slides around, out of time, emerges again and again as Minnock shares the story of one lonely heart wandering through  a picturesque tourist town: “Everybody’s hoping to find romance at different locations in Provincetown, and it never works out. Well this time it did.”

Stunning in its subtlety, Lewandowsky’s solo intro on “Bordeaux” serves as an opening gesture for Picard and Minnock to lead an exercise in intimacy. The singer intended for the ballad to reference duets between Maureen McGovern and Mike Renzi. “It’s very romantic,” says Minnock. “If you pay close attention, you’ll notice Mathis is completely in sync with what I’m doing. He hits when I hit. He knew exactly what I was gonna do.” The album’s vibe-casting reaches its ethereal peak on Herbie Hancock’s “Maiden Voyage.” Says Minnock, “In the studio, the vibe just started, and presented here is the take.” The penultimate song, “Everything Reminds Me of You,” features music from Picard with more lyrics from Holmberg. “It’s very nostalgic and a little sad,” says Minnock, who wraps a shimmering thoughtful vocal around each lyric. Mason and Liebman illuminate Minnock’s vulnerability and sense of humor on “You Don’t Know What Love Is,” the album’s final tune. “There’s a moment where I sing a line with real sarcasm; Sean picks it right up and responds with the same sarcasm,” he says. While he honors the repertoire’s complexity and colossal musicianship of his fellow artists, for Minnock, the story’s everything: “I like to go to a place of really raw honesty. And I have the story going at all times. It’s a great challenge. But I think, once you get it there, it’s a greater expression.”