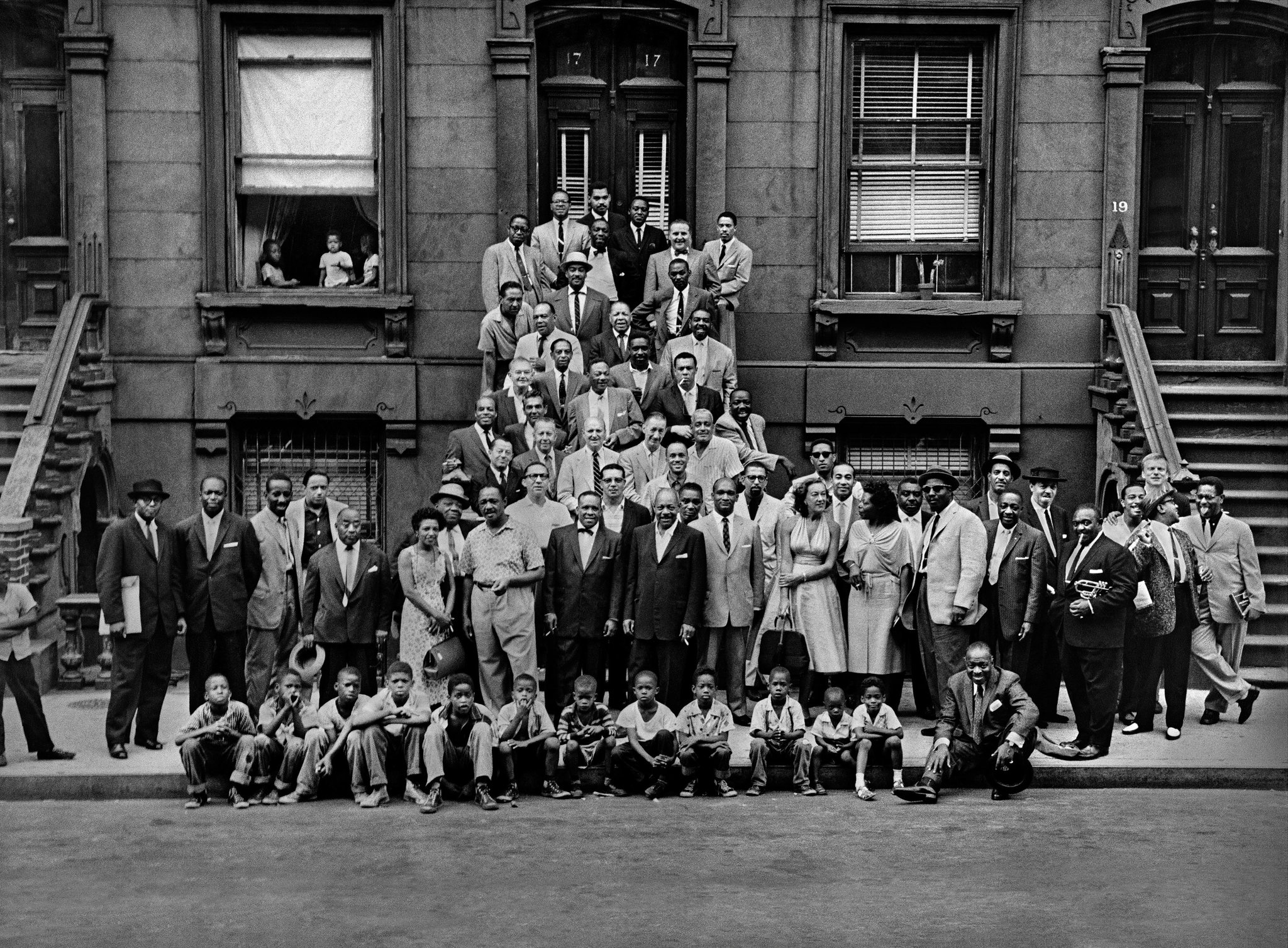 The Art Kane Harlem 1958 Street Co-Naming Ceremony scheduled for August 12, 2021 has been cancelled.

On August 12, there is a heat advisory and index of 107 degrees in New York City.
Due to safety precautions, Uptown Grand Central, Jazzmobile and Redwood Entertainment will no longer be hosting the scheduled street co-naming event.

NEW YORK, NY (July 28, 2021) – Uptown Grand Central, Jazzmobile and Redwood Entertainment are thrilled to announce the August 12, 2021 celebration surrounding the commemorative street co-naming of East 126th street between 5th and Madison Avenues as ‘Art Kane Harlem 1958 Place.’ August 12th marks the 63rd anniversary of the gathering of 57 jazz luminaries in East Harlem for the shooting of the famed Art Kane photograph “Harlem 1958.” Known alternatively as “A Great Day In Harlem,” the iconic photograph has become one of the most celebrated images in American history, capturing the vitality of jazz in the late 1950s. Dedicated to the preservation and furtherance of the jazz artform and the greater East Harlem community,  the celebration of this historic street co-naming event will take place from 2pm to 4:00pm EDT on Thursday, August 12th. Register for this free event here.

“Uptown is proud to honor the deep-rooted history of jazz here in Harlem, along with the visionary man who conceived and took this iconic photo more than 60 years ago,” shared Diane Collier, Chair of Uptown Grand Central. “Along with the Harlem/East Harlem residents, we are pleased to memorialize this wonderful event with a street sign on the block where it all happened.”

Supported by Manhattan Community Board 11 and  local New York City Councilpersons, Uptown Grand Central’s memorializing of the historic event is part of the organization’s longer-term goal to create a network of stops that can become a cultural walking tour of northeast Harlem, with other locations including the National Black Theatre & Frederica Teer Square, Langston Hughes House and James Baldwin Place.

Remarks will be delivered by Jonathan Kane, son of Art Kane and author of the book Art Kane: Harlem 1958; Dean Schomburg,  Member of the Board of the Schomburg Center for Research in Black Culture; and Wayne Winborne, Executive Director of the Institute of Jazz Studies at Rutgers University/Newark. Prepared remarks by saxophonists Benny Golson and Sonny Rollins, the last remaining living subjects of the photograph will also be shared.

Presented by Jazzmobile, the afternoon will also feature a performance by jazz great Patience Higgins and the Sugar Hill Quartet. Originally from Greenville, South Carolina, Higgins is a renowned multi-reedist and for two decades has been a member of the Duke Ellington Orchestra. He has toured and recorded with a who’s who of music icons including Aretha Franklin and  Ray Charles; Higgins also played with two other legendary bands the Count Basie and the Lionel Hampoton Orchestras, among others. A Harlem favorite, he and his swinging band are known for their energetic, exciting and enthusiastic performances.

This historic street co-naming event will take place on August 12, 2021 at 2:00 PM EDT at East 126th Street between Madison and Fifth. The entrance for guests is on East 126th Street and Madison Avenue.  Click here to register.

In August 1958, a budding photographer by the name of Arthur Kanofsky (Art Kane) conceptualized the notion of assembling the musicians of New York’s jazz community for a photo in front of an East Harlem brownstone. “I came up with the idea of getting as many musicians together in one place as we could. It would be sort of a graduation photo or class picture of all the jazz musicians. After I thought about it some more I decided they should get together in Harlem. After all, that’s where jazz started when it came to New York,” shared Kane in an interview. As a result of Kane’s efforts, 57 jazz musicians, including Mary Lou Williams, Count Basie, Thelonious Monk and Dizzy Gillespie duly assembled at the unlikely hour of 10:00 am at 7 East 126th street, between Fifth and Madison Avenues. The photograph was published in Esquire Magazine in the January 1959 issue. In 2018, Wall of Sound published Art Kane: Harlem 1958 – a visual history of the iconic shoot, edited by Jonathan Kane and Guido Harari.

Uptown Grand Central is a 501c3 nonprofit organization dedicated to transforming East 125th Street into a thriving corridor by delivering programs that put advocacy into action through collaborations with businesses, residents and neighborhood organizations across East Harlem. Since 2013, Uptown  has strengthened the community via programs that include organizing and promoting local small businesses; creating the Positive Workforce Clean Team that provides street cleaning seven days per week; beautifying the commercial corridor with street art, seasonal plantings and holiday lights; adopting the space underneath the Metro-North tracks at 125th & Park as a community plaza that features a year-round farmers market; and sponsoring neighborhood events including the Grandscale Mural Project, Party On Park, the Harlem Night Market and two of East Harlem’s Open Streets.

Founded in 1964, Jazzmobile’s founders were, National Endowment for the Arts Jazz Master Dr. Billy Taylor, Philanthropist and Arts Administrator, Ms. Daphne Arnstein with NEA Jazz Master Jimmy Heath. It is the oldest not for profit organization created with a mission just for Jazz: to present, preserve, promote and propagate America’s classical music Jazz, through high quality free programs. Throughout July 2021-July 2022 The organization is celebrating the 100th Anniversary of Dr. Taylor’s birth!  For 57 years Jazzmobile has been presenting world class musicians and clinicians and is training the next generation of Jazz artists (professionals and hobbyists) through core programs: SUMMERFEST (NYC’s longest running jazz festival); SJW|Saturday Jazz Workshop, “Jazz In The First Person,” a series of lecture demonstrations designed to introduce jazz music as a music appreciation course for toddlers to seniors.

Next for Jazzmobile is a move into its new offices in the National Urban League Empowerment Center scheduled to open by 2024. This new location will enable the organization to continue and expand its education and performance programs. Jazzmobile will also be one of the art and culture organizations in residence at the Victoria Theater Center, scheduled to open in 2022. Both are located in Central Harlem on West 125th Street.

Redwood Entertainment is a New York City based, global music entertainment group with nearly 40 years of experience in the music and entertainment industry. Redwood’s management department has been known for their comprehensive management, artist representation, and record label services. Redwood’s services have encompassed marketing, contract negotiations, public relations, and radio promotion with an award-winning emphasis on music sales, and video and film production. The company is ushering in a new era as they expand their footprint into music publishing, catalog development and acquisition, concert, event and touring production, as well as a new record label, RMP Records, set to launch in 2022.