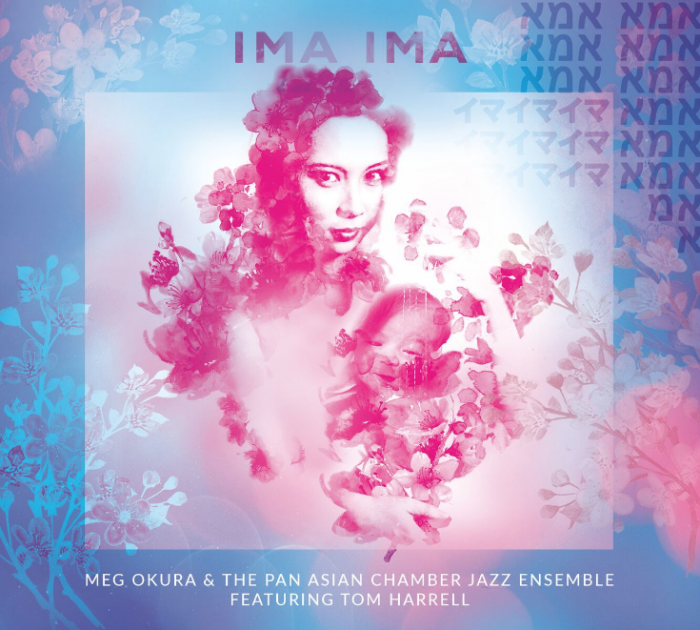 There are many thematic elements to Ima Ima, the 57-minute, seven-track album from Meg Okura & the Pan Asian Chamber Jazz Ensemble. The title has two meanings. Ima is Hebrew for mom. In Japanese Ima can be defined as now or the present time. Other topics in Ima Ima comprise womanhood and motherhood; large-scale violence and nuclear warfare; religion; and heritage. All these facets are part of Okura’s personal history and commingle through her many-sided compositions.

The material ranges across genres and into genre-less territory, incorporating jazz, chamber music, Japanese traditional music, blues and shades of modern classical. Everything coalesces via Okura’s vision and ability to disrupt expectations. Ima Ima was recorded in late 2015, initially issued in late 2017 and a CD was more widely distributed in May 2018. Dates don’t matter. This is timeless music which has heart, intellect and imagination. Okura’s pieces are full of details and nuances accentuated by many instruments, including Western and Eastern strings (violin; the two-stringed bowed musical instrument known as an erhu; guitar; and harp); trumpet, flugelhorn, piccolo, flutes, sax, clarinets; and rhythm instruments (drums, bass, piano). Most of the time, just a few instruments are at the forefront. An example is the beautiful, opening title track, a ballad which signifies Okura’s individual characteristics: she’s a mom, she’s Jewish, she’s Japanese, and the experiential aspects of being all three at the same time. During the six-minute arrangement there is veneered flute from Anne Drummond; charming and warm interludes from Sam Newsome on soprano saxophone; fine interplay between Brian Marsella’s acoustic piano and Riza Printup’s harp; and other appealing niceties.

There are two pieces associated with violence. First there is the 10:19 “A Summer in Jerusalem,” which is based on when some of Okura’s Israeli friends were constantly under attack. The feeling of a place always in the crosshairs led to this romantic-hued, fictional instrumental story about a young Jew and a young Arab who fall in love in summer, despite everything that is happening in Israel. “A Summer in Jerusalem” has various layers, and precisely shifts from fusion-esque tidbits to a grooving section fronted by Rez Abbasi’s electric guitar (which echoes Wes Montgomery’s responsive tone) and an affable area where Okura provides a violin solo. The other number which concentrates on contemporary brutality is “Black Rain,” which refers to the kuroi ame (or “black rain”) which is the nuclear fallout from the Hiroshima and Nagasaki atomic bombs. One of Okura’s relatives was a hibakusha (an atomic bomb survivor). During the seven-minute “Black Rain” Okura uses a Japanese minor pentatonic scale for the theme which she later juxtaposes with jazz chord changes. In keeping with a Japanese motif, Okura switches to the erhu, which supplies a different timbre than her violin.

The record’s literal and figurative centerpiece is the 9:31 “Birth of Shakyamuni,” a compositional collage which depicts the birth narrative of Buddha but also hints at Okura’s Christian upbringing. Both the Buddhist and Christina religious accounts share a common bond of a miraculous birth. Buddha was conceived when a white elephant touched his mother’s side; and Jesus came from a virgin birth. “Birth of Shakyamuni” has four segments: Introduction, The White Elephant, Chase, Lustration (which denotes a purification ceremony), and a Coda. Each segment is performed within an overall, non-stop suite. The music alters from moody to uplifting, and from chamber music to swinging jazz.

Another notable tune is the closing, nearly eight-minute “Tomiya,” which is dedicated to Okura’s father, Tomiya Okura. Okura states she, “Recreated the rhythm of a taiko drum ensemble by playing double and quadruple stops on the violin and plucking two strings with my left hand while bowing the other two strings.” Okura’s family were devout Christians. Thus, Meg Okura was not allowed to watch or listen to Buddhist ceremonies which would have included taiko percussion. Rather than align exclusively on Japanese musical inspirations, “Tomiya” comprises spliced musical parts of pre-WWII gypsy jazz, classical romanticism, Japanese folk and Latin jazz. Okura’s genius is she makes these disparate components organically united. There are several outside-of-the-norm large ensemble jazz groups led by composers such as Maria Schneider or Ed Palermo. If anyone has not taken notice of Meg Okura and her work in large ensemble jazz, it’s ima-time, or now-time.