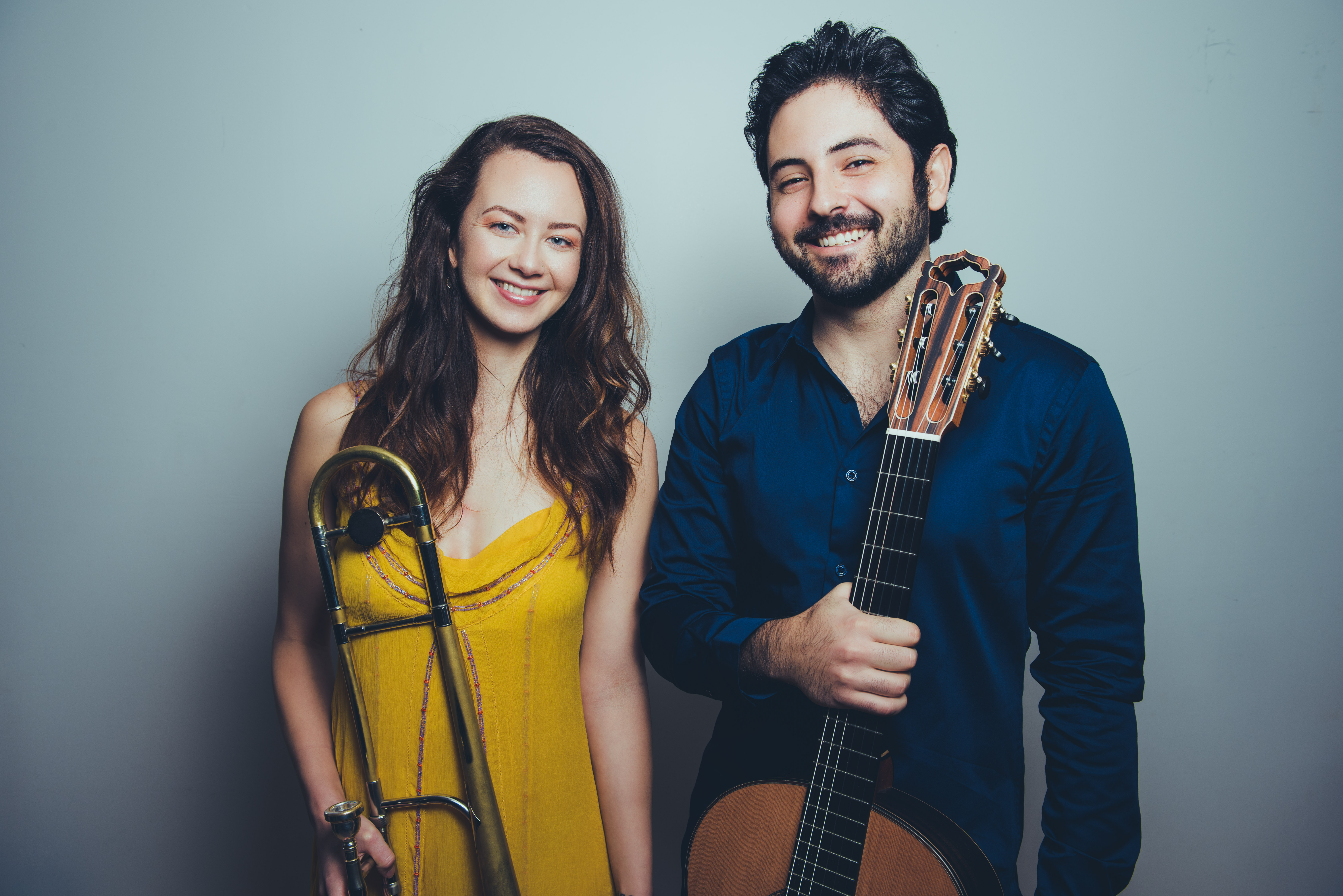 The sounds of Brazil prevail in the Bay Area in the first week of April.

On Tuesday, April 2, Danilo Brito, a mandolin virtuoso of choro, a balladic genre dating back to the 19th century, plays Yoshi’s, in Oakland. At SFJAZZ’s Joe Henderson Lab on Wednesday, Rebeca Mauleón will lead the fourth in a series of Brasil Feminino workshops, showcasing the nation’s female songwriters and performers. Caetano Veloso, septuagenarian veteran of the MPB (Música Popular Brasileira) genre, appears with three of his sons at the Paramount Theatre in Oakland on Friday, also under the aegis of SFJAZZ. And on Saturday, April 6, Natalie Cressman, an ascending star triply talented as trombonist, singer, and songwriter, will perform at Oakland’s The Sound Room with Brasilia-born guitarist, singer, and songwriter Ian Faquini, to celebrate the release of their album Setting Days of Summer, a tradition-hugging showcase of mellow Brazilian music.

Cressman, born in San Francisco and an alumna of the Ruth Asawa School of the Arts (SOTA), now lives in New York, where she attended the Manhattan School of Music and launched a multigenre career as a jazz trombonist and backup singer for Trey Anastasio, guitarist with the psychedelic rock group Phish. She spoke with SFCV by phone on the day after she and Faquini played the first date of their current tour, at the Rockwood Music Hall in the East Village.

“There were a lot of people that were just familiar with me from my work with Trey,” Cressman reflected about the gig. “I play a lot with louder, danceable bands, where the emotional experience is something different. I have a very different approach when I have to put out to cut across the band, and feel I need to fit into a funk style. So [the Rockwood audience] came in not knowing what to expect. And it was kind of cool to speak with them afterward and realize that I’m exposing some of them to Brazilian music for the first time. People were saying that they never really go out to hear this kind of music, and that it moved them in a different way.”

In fact, Setting Rays of Summer, which will be released by the family-run Cressman Music label the day before the Oakland gig (and the day after Cressman and Faquini’s tour stop in Los Angeles), is also different from much contemporary Brazilian music and from the far more globally familiar bossa nova, much closer to the earlier acoustic styles of samba “with people casually sitting at a table with pandeiros and percussion and guitars. We wanted to make an organic, very natural record that lets the songs shine and invites the listener in to something gentler, more introspective.

“And it’s a bit of a reaction against what is so popular right now, which is very ‘produced’ music,” Cressman continues. “The music business has become so much more than just what you’re hearing. It’s about the image, the lighting, the branding. We go for the sheer opposite of that, recording in one room, primarily full takes, very little editing, no auto-tune or anything like that. We keep it true to how we are live, and there’s a certain rawness, which isn’t demanded from people in the studio anymore.”

Live, and on this album, Faquini’s unaffected tenor voice is accompanied sweetly but with deft syncopation on his acoustic guitar. Cressman’s sylphic, clear soprano sings in harmony or solo, and she switches effortlessly to slide trombone, on which “I can keep my tone mellow and dark and lush, and have the flexibility to do more, because I’m not trying to be loud and bombastic, I’m trying to blend with Ian.” She points out that, “in the Brazilian tradition, a lot of the old sambas have trombone intros and melodies, and two of my favorite players are Zé da Velha, who plays a lot of choro, and Raul de Souza, in the jazz arena.”

For vocal stylings, “I’ve listened to a lot of Astrud Gilberto, and in terms of more contemporary people, Mônica Salmaso and Luciana Souza. Joni Mitchell is another influence, primarily as a lyricist, but also for her boundless willingness to go into the upper register, particularly on her earlier records.”

Long-time fans of Brazilian music may find themselves surprised, checking the fine print on the album cover: Despite their vintage feel, all of the consistently fine songs are originals, with all the music composed by Faquini, and the lyrics — primarily in Portuguese, with two exceptions in English and French — are by him, Cressman, and Brazilians Iara Ferreira and Rogerio Santos. Although there’s no booklet of lyrics included with the cd (“it’s so expensive to do so”), the content will be explained in concert, and Cressman will provide access to the lyrics and translations on her website.

“A lot of what Ian is looking for in lyrics is the sounds,” Cressman testifies. “For him, the meaning is less important than the sounding, the vowels accentuating the melodies. It’s this nice challenge to try and be poetic and say something meaningful in an eloquent way, but also in an auditorially pleasing way.”

Faquini moved to the U.S. as an eight-year-old, and attended Berkeley High School. “I remember my mom [Brazilian vocalist Sandy Cressman] meeting Ian and telling me about this kid living in Berkeley who was such an ‘old soul,’” Cressman recalls with a giggle. After she herself encountered Faquini at Dennis Broughton’s annual summertime Brazil Camp in Cazadero, he introduced her to what would be the title tune for Setting Rays of Summer. “I said I could hear English lyrics, do you want to take a crack at it? That’s the first song we collaborated on, and that’s when we started playing more together and spending more time together.” They’re now engaged in a bicoastal romance as well as a creative duo, with Faquini retaining his teaching position at the California Jazz Conservatory in Berkeley.

Cressman has made several trips to Brazil, some of them with Faquini, her mother, and father Jeff Cressman, a trombonist and former member of Carlos Santana’s ensemble. He was also his daughter’s producer on the Cressman Music label. While there, the younger Cressman gigged with numerous Brazilian luminaries, including Faquini’s prime mentor Guinga, and she researched the genres represented on the new album.

Baião, pronounced, “by-ow” and bearing an insistent rhythm, originated with the indigenous peoples of the Northeast, while Ijexá, pronounced “ee-jay-sha,” comes from the Afro-Brazilian candomblé religious tradition. “It will be the first time for a lot of our listeners to be hearing these grooves,” says Cressman, referring to two of the album’s tracks, “Sereia” and “Debandada,” respectively.

It may also be the first time, in a long time, that record-buyers and live audiences have heard something Brazilian or otherwise that’s so unaffected and accessible to the heart.