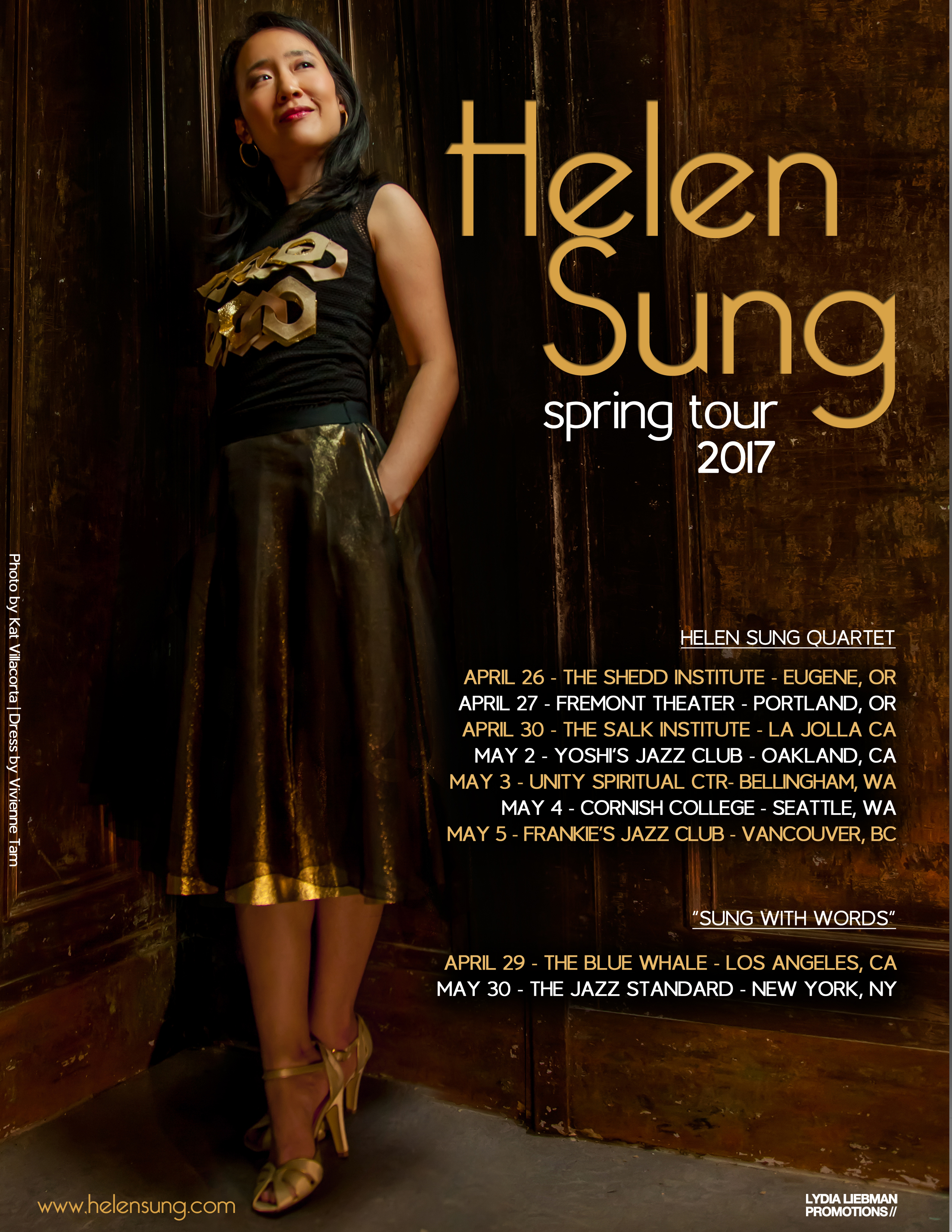 With the Helen Sung Quartet and “Sung With Words” in Oregon, California, Washington, Vancouver, and New York!

“What’s striking this time around is an openness of vision, paired with a looseness of execution. Ms. Sung sounds both relaxed and searching, and she imparts the same qualities to her crew.”

Sung, along with saxophonist John Ellis, bassist Boris Kozlov and drummer Darrell Green, will kick things off on April 26 in Eugene, OR, at the Shedd Institute, followed by an appearance at the Fremont Theater in Portland on April 27 and then at the Salk Institute in La Jolla, CA, on April 30.

On May 2, the Helen Sung Quartet (with Terreon Gully on drums) will return to the world-famous Yoshi’s Oakland for one set before visiting the Unity Spiritual Center on May 3 in Bellingham, WA. On May 4, Earshot Jazz will present Sung’s quartet at the Poncho Concert Hall at Cornish College and on May 5, the tour will conclude at Frankie’s Jazz Club in Vancouver, Canada.

With the support of her unparalleled quartet, Sung looks forward to presenting material with a focus on Thelonious Monk, whose Centennial Birthday is this year. “Monk may very well be her patron saint,” JazzTimes once wrote, and that sentiment rings true for Sung as the icon has indeed played a central part in her musical journey from classical to jazz piano: she was a member of the inaugural class of the Thelonious Monk Institute of Jazz Performance (at the New England Conservatory) and a semifinalist in the 1999 Thelonious Monk Jazz Piano competition. Sung was also commissioned by North Coast Brewing Company to write the theme song for their Belgian ale “Brother Thelonious” (featured on her acclaimed 2014 Concord release Anthem For A New Day). Her Spring Tour program will be rounded out with selections from Anthem as well as some instrumental pieces from Sung’s new project “Sung With Words”.

On April 29, “Sung With Words” (with guest vocalist Christie Dashiell) makes its first West Coast appearance at the Blue Whale in Los Angeles. A collaborative effort with the celebrated poet (and California’s current Poet Laureate) Dana Gioia which uses his poetry as lyrics to create a jazz song cycle, ”Sung With Words” will be featured on Sung’s next recording. In anticipation of the album release, Sung will present a CD Preview Listening Party on May 30 at The Jazz Standard, one of New York City’s premier jazz venues. Joining Sung will be Ellis, trumpeter Ingrid Jensen, bassist Ricky Rodriguez, drummer Kendrick Scott, percussionist Samuel Torres and guest vocalists Christie Dashiell, Carolyn Leonhart, and Vuyo Satoshe.

Sung’s rigorous classical background and her subsequent jazz studies have resulted in a unique musical voice. After graduating from the Monk Institute, she went on to win the Kennedy Center’s Mary Lou Williams Jazz Piano Competition and relocate to New York City, where she has worked with a “Who’s Who” of Jazz including the late Clark Terry, Ron Carter, Victor Lewis, Steve Turre, Wayne Shorter, Wynton Marsalis (who named her as one of his “Jazz Musicians to Watch!”) and MacArthur Fellow Regina Carter. Sung is also an award-winning composer and serves on the jazz faculties of the Juilliard School and Columbia University.

Having honed her craft with ensembles ranging from the Mingus Big Band to the T.S.Monk Sextet to Terri Lyne Carrington’s Grammy-winning Mosaic Project, Sung now leads a band comprised of some of this generation’s finest artists. Delighting audiences everywhere (stay tuned for the Sung With Words album release) with her renditions of Monk’s music receiving particular acclaim, expect the Helen Sung Quartet to, as he famously urged, “lift the bandstand!” The UK’s Sunday Times praised her work on Anthem – “…she takes all sorts of liberties with Epistrophy. But nobody will complain when the results are so compelling.”

More information can be found at www.helensung.com.