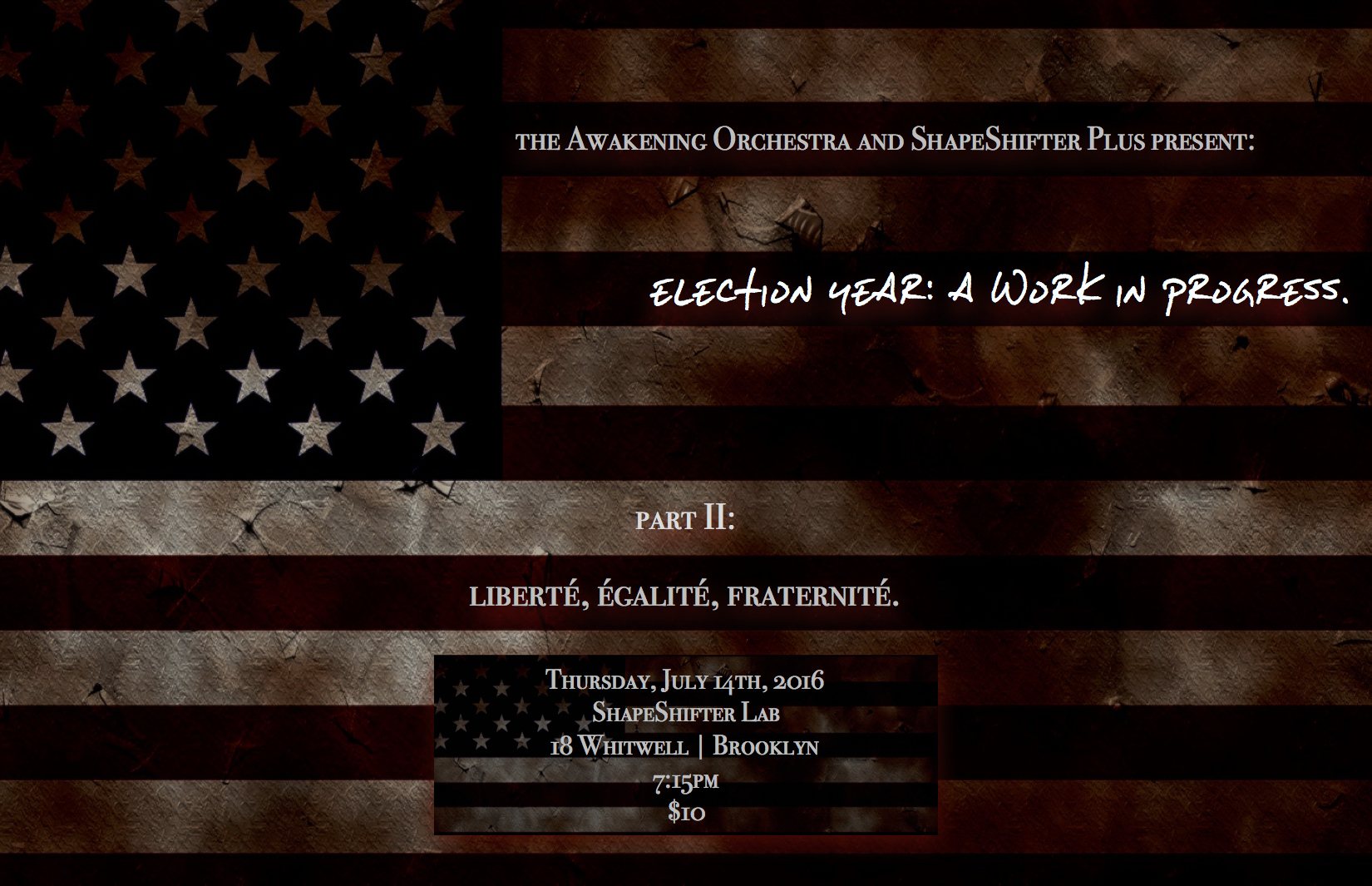 election year: a Work in progress.

ShapeShifter Plus is proud to present election year: a Work in progress part II: “Liberté, Égalité, Fraternité’ on Thursday, July 14 at 7:15 PM at Shapeshifter Lab in Brooklyn, NY.

election year: a Work in progress is a three-part symphonic work composed by Kyle Saulnier, presented by ShapeShifter Plus and performed by the Awakening Orchestra. Composed across the entire span of the election year as events unfold, each of the three performances add new movements and material that is relevant to both the 2016 election cycle in real time and to the dates on which the performance occur. The first installment entitled ‘Free Labor, Free Land, Free Men’ premiered on March 20, and the final segment will premiere on November 11.

Part II of election year, “Liberté, Égalité, Fraternité” will comment on the final primary buildup to the party conventions (beginning on July 18th and 25th), and the potential chaos of each as both parties look to be on the brink of fracturing. Additionally, as the performance falls on Bastille Day, the new movement will explore the stark contrast between the democratic ideals of the French Revolution and our questionable democratic processes of the present day.

Following the Awakening Orchestra will be Fabian Almazan’s Rhizome at 8:45 PM.

More information can be found online at www.awakeningorchestra.com and at www.shapeshifterlab.com.

ABOUT KYLE SAULNIER:
As leader of the Awakening Orchestra, Bronx-based composer Kyle Saulnier is steadily slicing his way through the modern musical landscape, consistently fusing the jazz vocabulary with orchestral techniques and a rock music punch. Alexander Abnos of WNYC has called his music “lush and inventive,” and Karl Ackermann of All About Jazz calls the Orchestra’s 2014 debut “as rare an achievement as Carla Bley’s Escalator Over the Hill… [a] tour-de-force and one of the best albums of the year.”
With an emphasis on post-modern third-stream music, the Connecticut-raised Saulnier combines the industrial- and alt-rock attitudes of his youth with Romantic and modern classical music, the post-bop driven Hartford jazz legacy, and even elements of the modern industrial, hip-hop, and electronic genres. Possessing a flair for the dramatic in all his works, he has carved a signature sound that is at once recognizable and unreplicable.