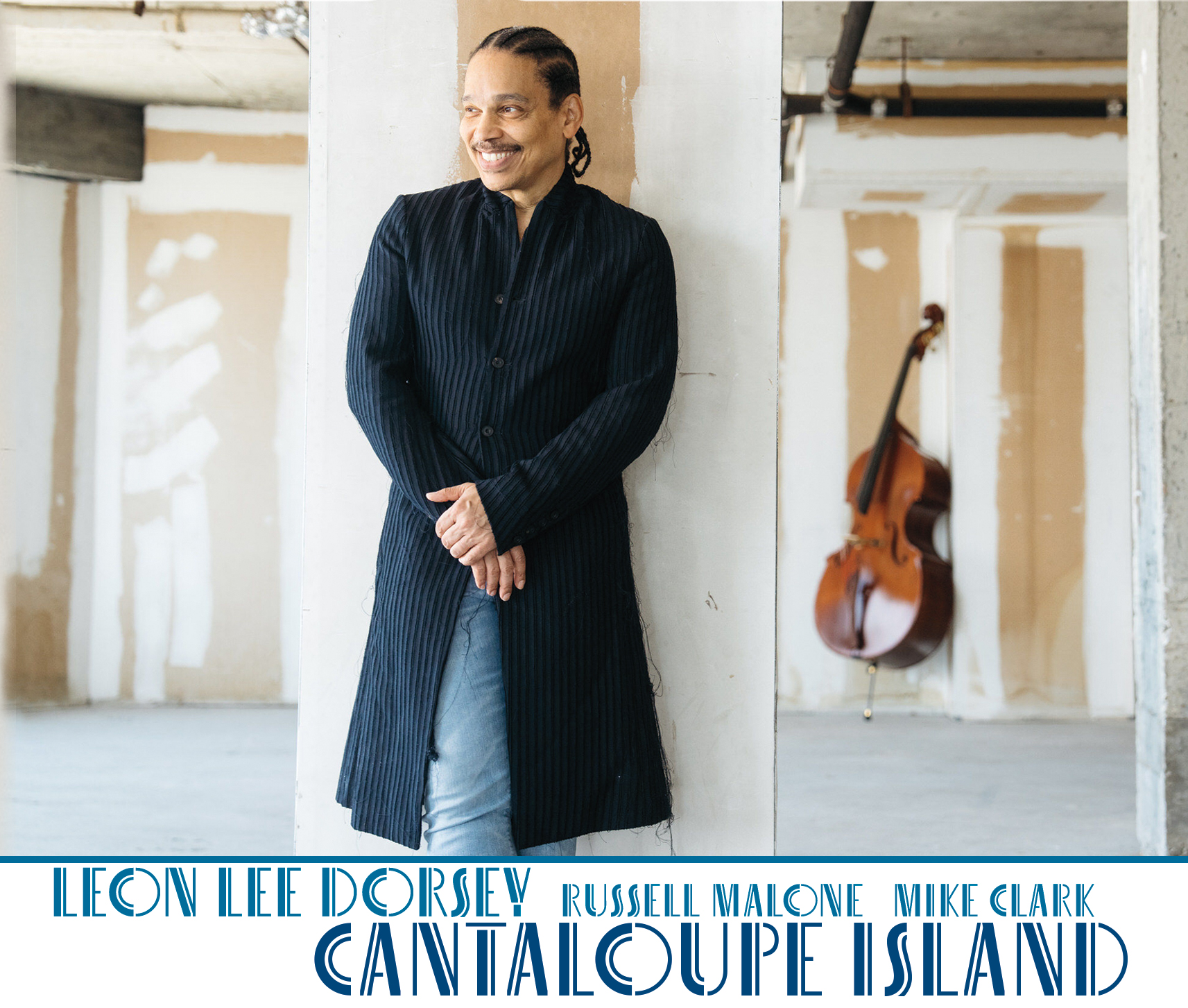 Renowned bassist Leon Lee Dorsey continues his prolific streak with the issue of Cantaloupe Island, the latest album to be released on his Jazz Avenue 1 label and a continuation of his bountiful partnership with revered drummer Mike Clark. On their sixth collaboration since 2019, the stalwart rhythm section brings in virtuosic guitarist Russell Malone for an invigorating nine-track program of compositions by Horace Silver, Wes Montgomery, Prince and more. Cantaloupe Island will be released on February 17, 2023.

Since joining forces four years ago, the dazzling duo of Dorsey and Clark has released a plethora of critically acclaimed albums with a different featured guest each time. Prior to the pandemic, the pair joined Greg Staff for the all-Thelonious Monk program on Monktime. Soon after, they brought in pianist Michael Wolff for the DownBeat Editor’s pick release Plays Sgt. Pepper, before turning attention to Thank You Mr. Mabern, the last album of the late piano giant Harold Mabern. Two more releases followed including the Latin jazz rumination Freedom Jazz Dance with pianist Manuel Valera and last year’s well-received soulful meditation on the blues with pianist Mike LeDonne, Blues on Top. While each release reveals a new musical side of this dynamic rhythmic pairing, their unique simpatico remains ubiquitous.

On Cantaloupe Island, Dorsey and Clark have tapped guitar great Russell Malone. “Russell Malone is an absolutely phenomenal musician,” said Dorsey. “Soulful and swinging and a brilliant improviser, he embodies the tradition and history of two of the greatest guitarists of all time, Wes Montgomery and George Benson. Russell can thrive and uplift any situation. He has had a longstanding partnership with my mentor and teacher, the legendary bassist Ron Carter. So it was a tremendous honor to have Russell on board with Mike and myself on our sixth project together. It was a dream come true and a perfect fit.”

Malone’s musical history with Ron Carter reaches back to the guitarist’s 1998 album Georgia Peach, his third as a leader, and has continued over time as a member of Carter’s Golden Striker Trio (first with pianist Mulgrew Miller, currently with pianist Donald Vega). Malone was also prominently featured on the recent PBS documentary, “Ron Carter: Finding the Right Notes.” The guitarist applies his harmonic sophistication and melodic invention with soulful aplomb on this spirited trio outing.

The triumvirate opens with the title track, Hancock’s “Cantaloupe Island,” with Clark alluding to his own broken rhythm syncopated patterns that he played on tour with the iconic keyboardist-composer back in the early 1970s on tunes like “Chameleon” and “Spank-a-Lee.” This is a more overtly funky take than Tony Williams’, which takes a rolling soul-jazz approach on the original recording from Hancock’s landmark 1964 Blue Note album, Empyrean Isles. A more syncopated version here, Malone’s deft jumping back and forth from urgent rhythm playing to rich chord voicings to cleanly picked, warm-toned single note lines, draws parallels to Grant Green. Clark’s loose, conversational approach behind the kit here sets the interactive tone that prevails throughout these nine tracks.

Horace Silver’s lively waltz “Barbara” (from 1975’s Silver ’n Brass on Blue Note) finds the remarkably polyrhythmic Clark tippin’ on the ride cymbal while maintaining that highly interactive pulse on the kit. Dorsey holds the fort on bass before unleashing one on his patented melodic solos as Malone supplies gentle arpeggios underneath. On an earthy, energized rendition of Silver’s “Sister Sadie” (from 1959’s Blowin’ the Blues Away on Blue Note), Malone digs in against Clark’s infectious Texas shuffle and Dorsey’s solid walking bass groove, flaunting some stinging chops that alternately signify early George Benson and latter day T-Bone Walker.

“Bumpin’ on Sunset,” the Latin-tinged number from 1966’s Tequila that introduced a generation of guitar players to Wes Montgomery’s smooth octaves playing, is rendered here as an entrancing soul-jazz groover. Malone summons up some signature Wes octaves work along with deft use of chord melodies and flowing single note lines. For a change of pace, they deliver a lush, relaxed rendition of the Ray Noble ballad, “The Very Thought of You,” with Clark’s sensitive brushwork setting a subdued tone for Malone’s minor key reharmonizations on that familiar standard. Dorsey’s sparse low-end presence here adds to the meditative nature of this hauntingly beautiful interpretation.

Shifting gears, their snappy rendition of Prince’s “Thieves in the Temple” (from his 1990 soundtrack album to the film Graffiti Bridge) has drummer Clark back in a funk bag with Malone carrying Prince’s vocals on guitar. Aside from supplying some insistent, double-timed comping and rich chord melodies, Malone also delivers some wicked string-bending and adventurous single note statements on this pop number (which was also covered by Herbie Hancock on his 1996 album, The New Standard).

A waltz-time interpretation of the standard “That’s All” is underscored by Clark’s hip brushwork and Dorsey’s melodic bass lines. Malone’s chord melody work and fluid single note lines punctuate the upbeat proceedings. When Clark switches to sticks and swings in a more forceful mode, the guitarist digs in and delivers with gusto, alternately running some flowing legato lines and more deft chord melodies. Dorsey’s agile, woody-toned bass solo here is right in the harmonically inventive tradition of his former teachers and mentors Ron Carter and Richard Davis. Clark returns to brushes as the trio takes it out in elegantly swinging fashion.

Their dreamy take on the Kenny Burrell dark-hued ballad, “Listen to the Dawn,” is a veritable clinic in the art of chord melody playing by special guest Malone. They conclude the program with a laid-back, loping rendition of Wes Montgomery’s “The Thumb,” an oft-covered tune that also first appeared on Wes’ 1966 Verve debut, Tequila. Clark engages in some fantastically interactive playing here with Malone while Pittsburgh native Dorsey walks in the tradition of another legendary Pittsburgher, Ray Brown. Clark takes it down to a whisper behind Dorsey’s remarkably fluid bass solo before Malone returns to exchange vigorous eights with the drummer.

This stellar outing is yet another example of the musical synergy that Clark and Dorsey have forged together over time. And Russell, one of the classiest and most acclaimed guitarists on the jazz scene today, brings something very special to that ongoing partnership on Cantaloupe Island.