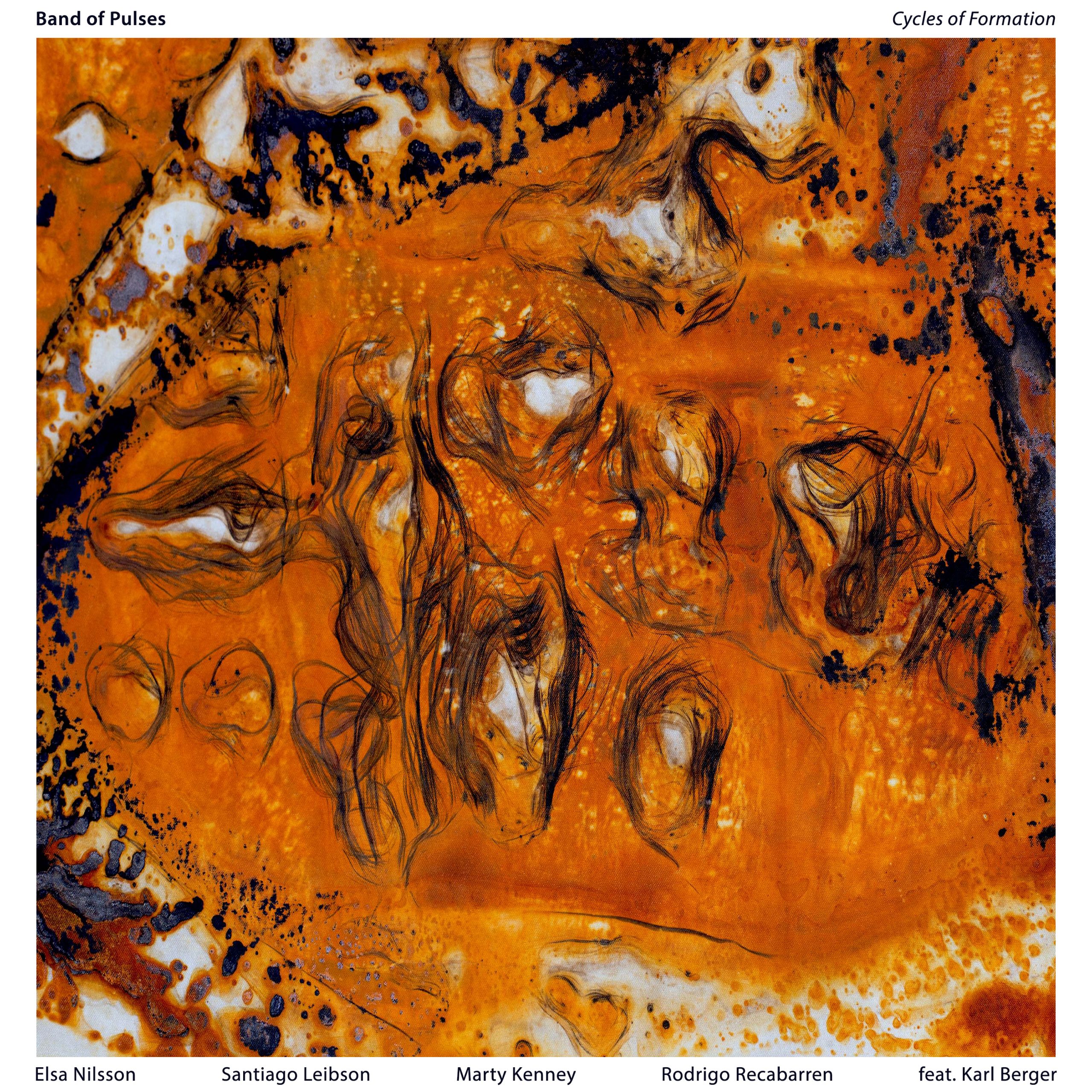 Band of Pulses, Cycles of Formation

Flutist and composer Elsa Nilsson issues Cycles of Formation with her project “Band of Pulses” on ears&eyes Records October 28th, 2022. Over the past few years Nilsson has become fascinated by the creative process across idioms. She examined these processes with visual artists, playwrights, actors, mathematicians, biologists and above all poets. She both experienced the work as a viewer, and spoke to creators. In this release Nilsson explores these processes in collaboration with pianist Santiago Leibson, bassist Marty Kenney, drummer Rodrigo Recabarren, vibraphonist Karl Berger, poet Aviva Jaye and visual artist Daniela Carneiro Lino.

“Cycles Of Formation” began with a recording session where Nilsson’s new project “Band Of Pulses” (Santiago Leibson, Marty Kenney and Rodrigo Recabarren) went to Woodstock, New York in March of 2022 to record at Applehead Studios on an invitation from Nilsson’s teacher Karl Berger. From the first note it was clear that there was something special in this session. No words were spoken; no plans made. They just dove in and unfolded these sounds together, engaging fully in the process of discovery. These recordings are exactly what was captured by Chris Bittner that day, mixed and mastered but otherwise unedited.

“Band of Pulses” came together around their mutual fascination with the un-notable aspects of musicality. Together they explore the gray zone between melody and speech, using a spoken voice as foundation for compositions and improvisations. This has led them to an approach of mutual listening that goes inside each other’s inflections and storytelling, creating an improvisational framework where intentionality and conversation imbues every choice that is made.

Nilsson has been studying with Karl Berger since January of 2020. In their lessons they explore concepts Berger has developed over many years of teaching through Creative Music Studio, the organization he started with Ingrid Sertso and Ornette Coleman in 1931. Its initial advisory board, comprised of legends from all aspects of music, the arts and philosophy, included composer John Cage, conductor/musician Gil Evans, philosopher/educator Buckminster Fuller, composer George Russell, painter Willem DeKooning and composer/conductor Gunther Schuller. Nilsson describes studying with Berger as an uncovering of things she already knew but somehow forgot. For the past year Nilsson has also played in the CMS orchestra and when given the chance to bring a band to record with Berger there was no question in her mind who to bring. A lot of the concepts she is exploring with “Band Of Pulses” is a fallout of her lessons with Berger. The unabashedly open humanity, ears and minds of her fellow musicians in “Band Of Pulses” is to her the perfect combination to Karl Berger’s openhearted, joyful and honest way of playing.

After the recording the band let things sit and settle in. Planning to edit into shorter tracks, Nilsson began to listen a few weeks later. Each piece took her on a journey of discovery and rediscovery that made it clear that the pieces needed to stay intact, the stories to be told in full. These stories took shape as notes and diagrams over weeks of listening, and once they had settled on a place that felt clear, Nilsson approached poet Aviva Jaye with the idea for a collaboration. Aviva Jaye is a performing artists and composer primarily wielding voice, piano, harp, guitar and ukulele. She often combines acoustic and electronic elements to unlock a portal for listeners to venture, exploring the dimensions of empathy, self-awareness, social justice and futurism. Her interdisciplinary work includes theatre, dance, paper arts & poetry. Nilsson and Jaye had been talking about doing something together for years as Jaye’s process as a poet is strikingly similar to Nilsson’s as a composer, mainly sitting with the material until the story shows itself clearly. Nilsson sent Jaye the tracks along with her notes, and Jaye returned a collection of poems that reflected the journey of the pieces and the movements between them.

Nilsson met Daniela Lino at a club she was playing at in July of 2022 in Lisbon, Portugal. Lino had an exhibit of her art up in the same venue: Elipse (2022), an installation of 15 rust prints on fabric, arranged in an elliptical cycle. Betina Juglair writes about Lino’s work: “Daniela provides matter – iron, water, oxygen, time and space to breathe – as food for an “alchemical dance” where “the metal, with all its strength and lightness, unfolds and expands into its own geography of colors, textures and smells. The movement is spontaneous and free: the rust sometimes draws black lines, at other times it synthesizes into dots, or spreads into bright orange specks, and in rare moments it gives us a glimpse of an intimate glow in deep blue. In these prints there is room for everything, or at least everything that matters: to contemplate the cycle of things, to create bonds with matter, to ask questions to the rust. In “Elipse”, the pieces compose a sequence, opposing each other, in proximity and movement, like ancient planets walking through an ever-expanding firmament.” Nilsson was drawn to the work and spent an hour in the Elipse, improvising with the fabric. Musically it moved like cycles of formation, and Lino’s work was the obvious choice for artwork to accompany this release. The images you see are details from “Elipse”.

Cycles of Formation consists of three pieces. Cycles, Formations and Prevailing Winds. All three depict the internal process that becomes part of the external process in creating. The pieces explore aspects of what it means to understand our own mechanisms, both as an artists and a person. The first track, Cycles, depicts how every part of a cycle contains every other part. In Nilsson’s notes that were sent to Jaye and Lino; “as we move through the cycles of our lives, everything passes, moves and flows into the next thing. In this piece I heard that happen in five distinct parts. The first four started with Underneath. In the low times, when we are in the underbelly of the cycle, moments of struggle that feel like they will last forever. Of course, nothing does. Rising is the process of finding a way out of this conviction that a feeling is permanent. Floating is the out of the body experience of joy and peace, a meditation and feeling of flight. Falling is coming back to reality from moments of delirium, and returning to the ground. The fifth section, Spiral/Return, depicts the continuous nature of this process. The awareness in each moment that the next will come.” This is mirrored in Nilsson’s creative process as a composer; stages of self doubt and ecstasy in her relationship with the work she is doing.

Formation depicts the struggle of changing one’s mind. Another cycles, this shows the resistance to change and the internal barriers and processes in the formation of our identity. From Nilsson’s notes: “It begins with the Formation of an idea. We are convinced we know ourselves and the world. Things seem solid, grounded and finite. The formations are something we hang our identity on without questioning it. Next is Deformation. The tenets of the idea begin to conflict, causing tension. It begins to shift and deform like a funhouse mirror, no longer feeling solid and stable. We start to question but are not yet sure what it is we are questioning. We grasp onto our original ideas and beliefs with everything we’ve got for fear of our identities dissolving. Next; Information. The choice to seek out and explore things outside of our preconceptions. This process leads us to see things as fluid and see ourselves as organic rather than static. We seek, search, wonder become curious. Then; Transformation. Our perceptions begin to shift. We discover that what lies underneath the formations is not the ideas and beliefs we define ourselves by, but rather our true humanity. We see clearly the cage we made for ourselves through these beliefs and definitions and choose to break them wide open. Finally; Reformation. We take what we have processed and rebuild our beliefs with more space, more openness, more willingness to hear other perspectives and experience conflicting ideas as all containing truth. We look back at our original formation and see a stranger. The process of becoming has created another. Over time we become strangers to ourselves. We find comfort in the idea, again, of cycles. Everything flows and moves. It is no work to flow. We just show up.”

Prevailing Winds is the process of letting go of the self and experiencing the motion of everything around us. Every manner of wind makes an appearance here. It begins with a breeze, with a hint of something more. It’s the kind of breeze that feels peaceful, but you can smell the storm coming in the air. The pressure builds and moves, grows and releases. The movements are a study in when to stand your ground and when to flow. Sometimes the only way to break a cycle is to disrupt its movements.

The album will be releases digitally on Bandcamp with a physical release consisting of cards of the images by Daniela Carneiro Lino and poetry by Aviva Jaye that coexist with the pieces. They come with time stamps for the music and are meant to be experienced in tandem.