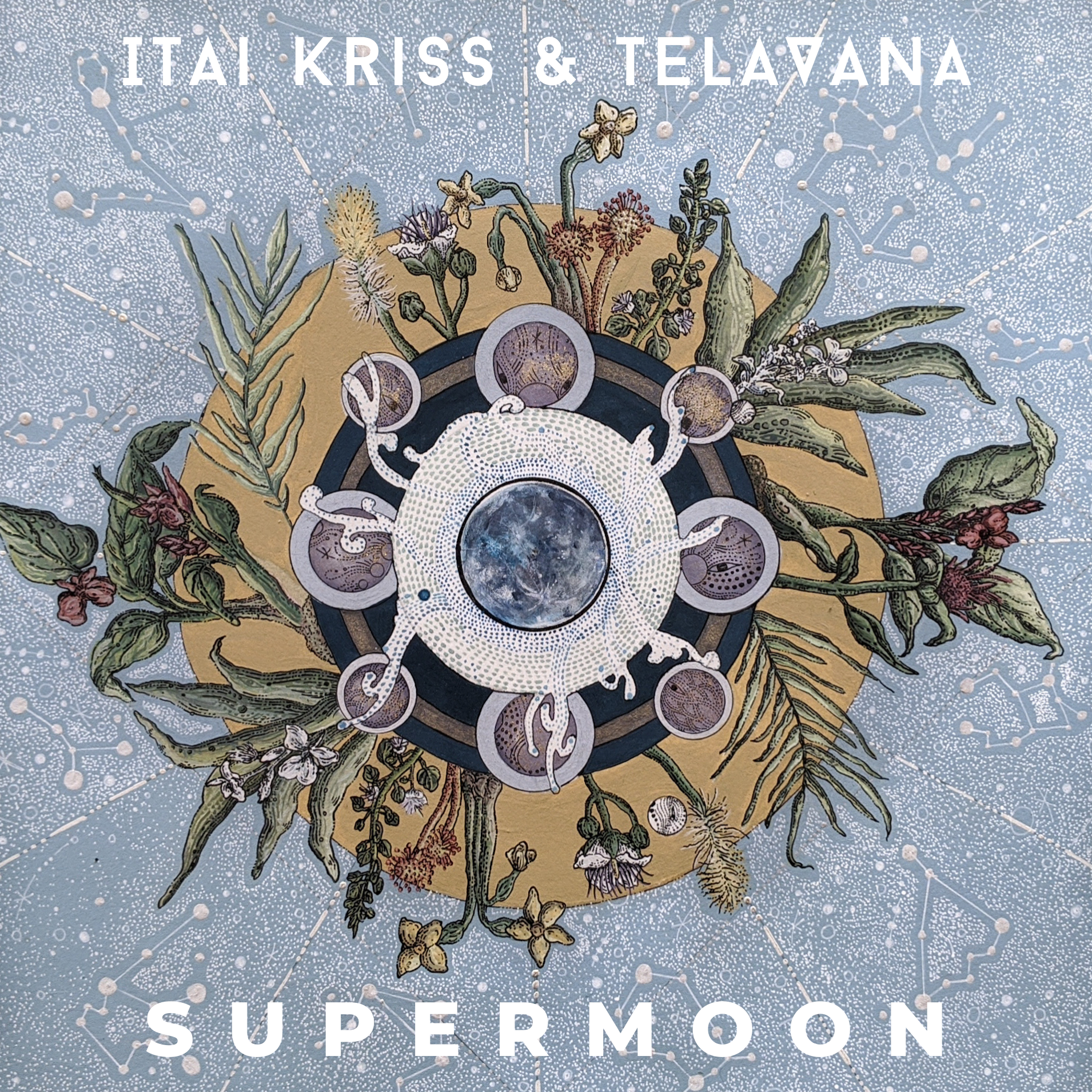 Itai Kriss & Telavana present an offering to humanity and the universe with new release Supermoon, due out on October 8, 2021

New York Based flutist and composer Itai Kriss is thrilled to announce the October 8, 2021 release of his third album Supermoon with his multicultural ensemble Telavana. A prolific bandleader with a well-earned reputation as an ingenious composer, Kriss is known for his natural skill of combining a broad range of musical styles in an uncontrived fashion – notably that of Middle Eastern and Caribbean sensibilities.  In 2018, Itai Kriss and Telavana released their eponymous sophomore album which was praised for meeting the musical minds of these two spheres in an original and cohesive way. On Supermoon, Kriss continues this tradition of amalgamation with a dynamic program inspired by astrology and heavy philosophical questions.

“The signs of the Zodiac also represent a connection between us humans here on Earth and the stars; up above and far beyond our reach, ever present, ancient and mysterious. The planets and stars have been there since before we existed and most of them will still be there after we’re gone,” Kriss muses in the liner notes. Each track on Supermoon is named for a Zodiac sign, and sonically reflects each sign’s attributes.

Itai Kriss and Telavana is made up of the formidable trumpeter and flugelhornist Wayne Tucker, powerhouse pianist César Orozco (who also appears on Fender Rhodes), in-demand bassist Tamir Shmerling, the inventive Dan Aran on drums and Marcos López, a fast rising star on percussion. Heavyweight percussionist Keisel Jiménez makes a guest appearance, as do creative vocal forces Malaya Sol and J. Hoard. The brilliant Shai Maestro is featured on keyboards and synths on multiple tracks.

Listening to Supermoon is a progressive experience, with each of the tracks taking on a distinctive life of their own as they go on. Selections such as “Gemini” begin with a gentle introduction before slowly transforming into a driving African 12/8 vamp. Horns repeat the refrain, punctuating the groove, and plunge Kriss into one of his most evocative solos on the record. Another highlight, “Virgo” begins as a slow and pensive reflection, before evolving into an exuberant, high-energy celebration featuring the always soulful vocalist J. Hoard.

Other tracks surprise because of their eclecticism. “Crustacean Vacation”, a crowd pleaser and fan favorite from live performances, is a dancing head bop with clear techno influences while “Taurus” is a rousing Timba featuring the prolific Cuban percussionist Keisel Jiménez, who spins verses as the lead vocalist. The ensemble shines on the brisk “Capricorn”, which features tight horns on the jagged rhythms with acute precision, supported by a rock-solid rhythm section.

It is no surprise that the fusion of all these musical styles comes off naturally, seeing that Kriss and the core members of this ensemble have been regular fixtures on the dynamic Latin scene in New York City. “I am so grateful to be able to create music with such incredible musicians, hailing from Puerto Rico, Israel, Cuba & New York,” reflects Kriss. “This album is about all of us, our planet, our universe and the most powerful and potent force which helps us make sense of it.”

The concept of Supermoon is one that attempts to grapple with the questions of our existence in the vast universe. “As we track the movements of the celestial bodies across the sky we are inspired to think of things that are bigger than ourselves and  contemplate our lives and problems in the context of eternity and infinity,” Kriss muses. As the album draws to a close with the Middle Eastern-tinged “Pisces” one is inclined to feel they’ve reached the end of a momentous and exhilarating voyage.

Itai Kriss, a Grammy nominated recording artist praised by Jazzwax as “one of the most exciting new flutist-composers” on the scene, commands a variety of musical genres with an eclectic style infused with Jazz, Latin and Middle Eastern sounds.

According to Downbeat Magazine, there is a “tangy, exotic flavor” to the New York musician’s style, which can be heard on his debut album, The Shark (2010) as well as on his sophomore release, TELAVANA (2018).

After spending nearly 20 years working at the forefront of New York City’s Jazz scene while performing, recording and touring with some of the world’s top Afro-Cuban, Latin and Salsa artists, flute virtuoso Itai Kriss fuses the sounds of his native Israel with those of his adopted homelands in the Americas to create TELAVANA. From the desert shores of Israel to the tropical beaches of Cuba, TELAVANA bridges the musical spheres of the Middle East and the Caribbean by combining Timba, Soul, North African music and Jazz to create a unique and lively mix of rhythms and textures.