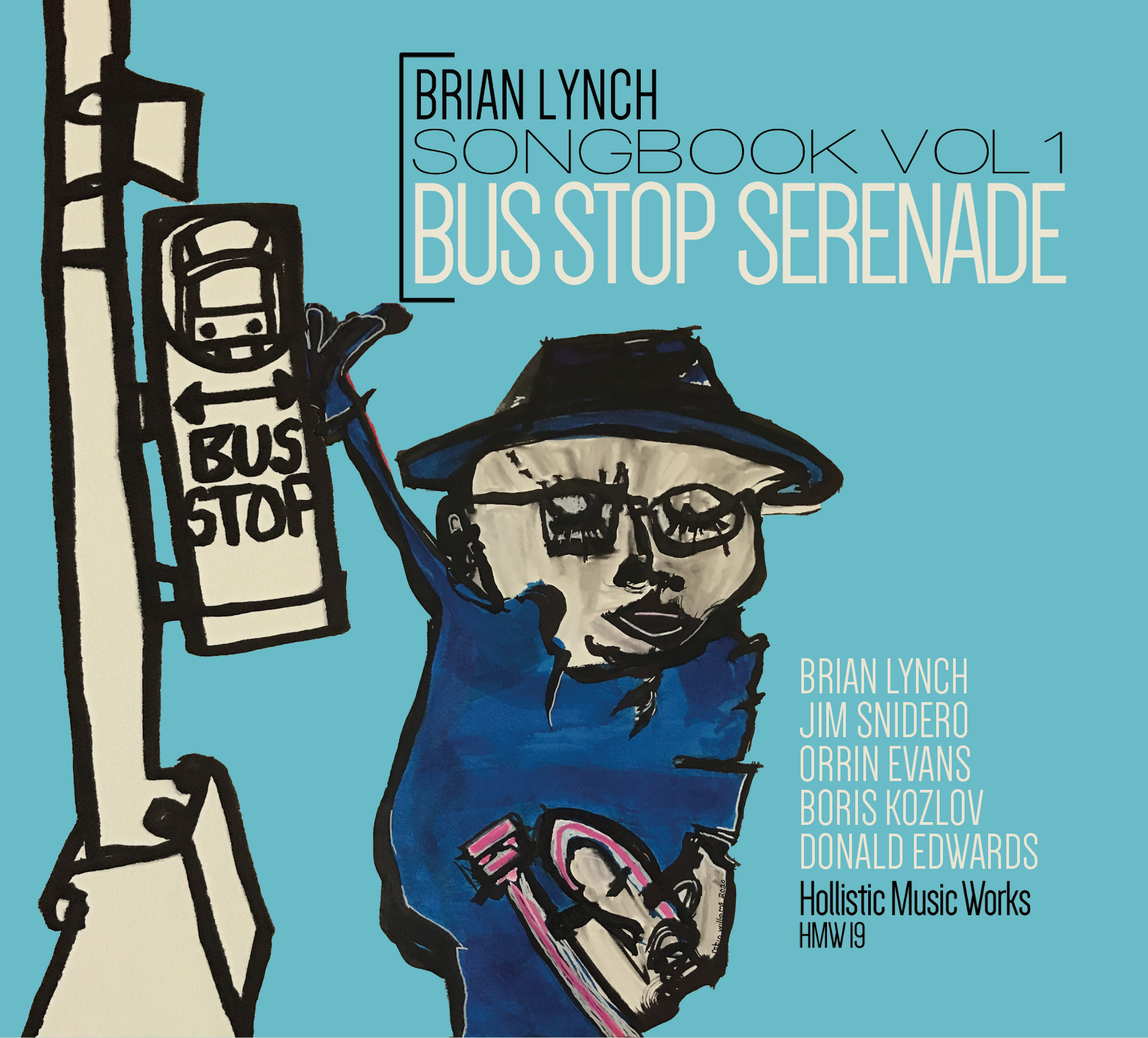 MULTI-GRAMMY® Award-winning trumpeter Brian Lynch is proud to announce the upcoming release of Brian Lynch Songbook Vol. 1: Bus Stop Serenade, his new recording on Hollistic MusicWorks due out October 15, 2021. The first in a series of “Songbooks” intended to reclaim the many original compositions that Lynch has recorded for other labels throughout his distinguished career as a recording artist, Bus Stop Serenade focuses on music originally composed between the mid 1990s through the mid 2000s, configured here for the classic quintet formation of Lynch on trumpet and flugelhorn along with longtime front line partner Jim Snidero on alto saxophone, the redoubtable creative Orrin Evans on piano, stalwart virtuoso Boris Kozlov on bass and the swingingly inventive Donald Edwards on drums.

This quintet will be celebrating Bus Stop Serenade’s release with two very special club appearances on Friday, October 22 at the famed Deer Head Inn in Delaware Water Gap, PA, and on Saturday, October 23 at the famed Smalls Jazz Club in New York City  Lynch states: “The Deer Head Inn has a quite special place in my heart, having played there so many times with the great Phil Woods (the Quintet’s last album was recorded live there) and with my own groups. Having recorded this album in the Poconos (Red Rock Studio in Saylorsburg, PA), and having “prepped” the music on a gig at the Deer Head before the record date, playing for the release at The Deer Head is like coming home. Smalls is another special venue for me, where I’ve played often over the years with my own bands and always have enjoyed hanging out in the atmosphere of one of the most authentic jazz clubs left on the planet. Presenting the music from the album at these two sacred spaces is a perfect launch for this record.”

What provoked Lynch to re-record his old material? Brian explains: “I’m quite attached to all the tunes that I’ve written over the years, and have often felt that they would benefit from a little attention in the form of new versions that would introduce them to contemporary listeners who may not be familiar with my earlier work. Also, I seem to have become quite stubborn in recent years about invoking artistic self-determination for myself at every opportunity, and having masters of my complete catalogue in my possession has become a bit of an obsession. Accordingly, I have embarked on a quest to re-record for my own label Hollistic MusicWorks every single original tune of mine that was recorded on other labels between the beginnings of my recording career in the 1980s up to the last album I recorded outside HMW in 2010.  I will be releasing a series of “Songbook” albums, of which Bus Stop Serenade is the first volume, updating this body of work for a new generation of listeners as well as for those familiar with the original versions. I think, actually I KNOW, that these remakes will reflect favorably on the years that have passed and bear the most exacting scrutiny as both compositions and performances!”

Well put, and it is certainly evident that “invoking artistic self-determination” has reaped benefits for Lynch ever since his first fully self-produced and fully owned recording project, the breakout Grammy® Award winning The Brian Lynch-Eddie Palmieri Project: Simpático was released 15 years ago. The ambit of Lynch’s independent and artist-owned label Hollistic MusicWorks has been distinguished by many triumphs, including a 5-star Downbeat review for the label’s first release, Unsung Heroes; critical acclaim for Questioned Answer, which first introduced new piano star Emmet Cohen to wider recognition; a Grammy nomination (one of the very first for a independent artist-owned label) in 2016 for Madera Latino, celebrating the music of Woody Shaw with an all-star cast of trumpeters and Latin jazz aces; and most recently, Lynch’s second Grammy Award for 2019’s magisterial The Omni-American Book Club, his first big band album and a project inspired both by Brian’s love of reading and his lifelong passion for social justice.

The rewards of revisiting Lynch’s past oevure on this new album are plentiful. Whether the quintet is burning on swingers like 24/7, Keep Your Circle Small, or On The Dot, hitting a Afro-Caribbean groove on such numbers as Afinque or Clairevoyance, or getting pensive and deep on the delicate Before The First Cup, Lynch and his all-star quintet bring a level of virtuosity, nuance and just pure vibe to these songs only hinted at in their original recordings. Jim Snidero’s probing alto sax stylings bring a new dimension to compositions recorded originally in quartet form, such as Charles Tolliver (a salute to the iconic trumpeter/composer) and the title track, Bus Stop Serenade. And the stellar work in solo and accompaniment of pianist Orrin Evans, bassist Boris Kozlov, and drummer Donald Edwards, along with the fearsome swing these three generate, transform all they touch into musical gold, notably Woody Shaw, a Lynch classic from the turn of the millennium and also a highlight of The Omni-American Book Club in big band form.

As always, Lynch’s trumpet and flugelhorn never fails to excite, delight, and edify the listener, whether aficionado or causal newcomer to his sound. Brian’s exacting dedication to excellence on his chosen instrument, along with his oceanic comprehension of the many idioms that comprise his musical territory – and a good dose of a natural soul deepened by life, experience and loss – has resulted in his remaining at the top of the heap of today’s trumpeters and indeed, as he experiences it: “…playing the best that I ever have in my life at this point!”

A special note about the recording process and the resultant track list for this album, as Brian relates in his liner notes: “We cut this album in a single day in Kent and Lois Heckman’s beautiful Red Rock Studio out in the Poconos, after a warmup gig the night before at the famed Deer Head Inn. In order to get through all the material in time for the rhythm section to drive back to the city for their Saturday night gigs (boy, could we use some of those now), things had to move quickly. There wasn’t generally time for more than two takes of anything – a “warmup” first take that allowed us to get comfortable with the tune (we sometimes stretched out more on those) and then a second pass for the record. When I reviewed the session for mixing, to my surprise I found that so many of those first takes were special, along with the “real” takes being so outstanding, that it was exceedingly hard to make a choice. So I decided to include them all! On some tunes there’s a shorter “radio-friendly” and a longer “stretching out” version, and on other tunes the two takes are more or less uniform in length. I’ve organized the album itself as two “takes” of the program (“The Express Route” and “The Alternate Route”), with Keep Your Circle Small (the only tune represented as a single take) as the bridge between the two programs.” These “routes” correspond to each CD on the 2 CD physical version of the album; all tracks in both routes are included on the digital release.

A special aspect of Bus Stop Serenade is the design for both digital and CD presentations of this album. The unique line drawings of Robin D. Williams, executed using her signature “blind drawing” technique, and the contemporary yet classic package design from Jamie Breiwick combine to delight the eye every bit much as Bus Stop Serenade’s music delights the ear. For those who love artistry in both sight and sound, Bus Stop will be also released in a special edition, limited to 100 copies box set, featuring reproductions of Williams’ artwork from the album suitable for framing and a deluxe booklet to accompany the two CDs.

Brian Lynch looks forward confidently to a positive reception of his “new wine, old bottles” project and the success of its first volume. Brian states: “This album will appeal to anyone who wants to experience through sound the bracing immediacy of gifted improvisers in flight, conversing with both the distinctive musical frames I’ve provided them and with each other. Whether on your device, in your car, or even sitting in your special listening room, Bus Stop Serenade will provide a satisfying musical journey worth taking, on either express or alternate routes.”