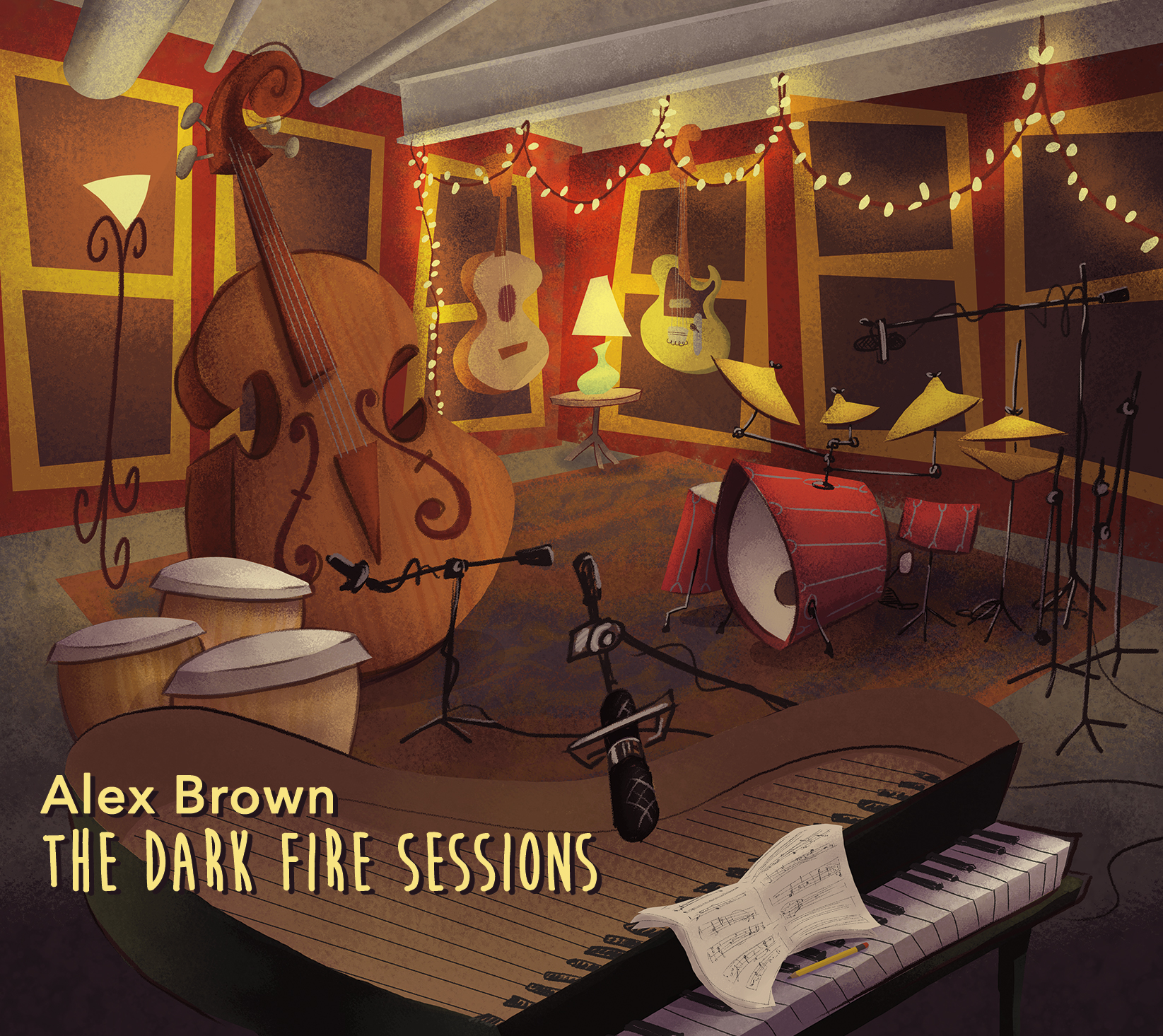 Pianist and Composer Alex Brown Captures the Vibrant, Transformative Power of Musical Camaraderie on New Album, The Dark Fire Sessions, Due Out on October 15, 2021

NEW YORK CITY, N.Y. – Alex Brown is an electrifying rising artist in the New York Jazz scene, whose vision, musicality, and abilities as both a pianist and composer have aptly lauded him with praise from Downbeat Magazine, the New York Times, and both the Latin and mainstream GRAMMY Awards. Above all, however, Brown is a musician who knows that music reaches its greatest potential in companionship, collaboration, and shared creativity. With The Dark Fire Sessions, Brown pays homage to the transformative process of regularly performing music with a group of companions who have become closer than blood, and documents in ebullient technicolor the brilliance of three minds creating seamlessly together.

Alex Brown has been collaborating with his biological brother, bassist Zach Brown, and de facto brother, drummer Eric Doob, for a plethora of years. From beginning the writing process together, to performing live and taking that music on the proverbial road as they toured overseas, this core trio have worked together, sweat together, and made miracles together. It is this camaraderie and relationship irrevocably intertwined in music that led Alex to take the steps towards the studio. More than recording mere music, he desired to create something that would honor the vivacious energy and evolution of their compositions and performances spurred on by their brotherhood.

A key factor leading up to the birth of The Dark Fire Sessions was the establishment of Dark Fire Studios, an independent rehearsal and recording studio founded by Alex and Zach in Harlem that they operated over the course of a year. Building from scratch, the brothers rented a commercial space and began their venture, with Zach taking the reins as foremost audio engineer. “All of the credit goes to Zach,” Alex says. “He did an incredible job handling every aspect of this, from building his own acoustic panels to creating the perfect studio atmosphere.”

The title of the album is taken directly from the name of the brothers’ studio, and bears witness to more than just the existence of their studio. Beyond the surface, The Dark Fire Sessions stands as a testament to the strength of brotherhood in a tangible way, a stoic memoriam of what can be achieved and what can be learned. In so doing, both the legacy of their studio and the metamorphosing history and development of their music itself are captured through this album.

Musically, The Dark Fire Sessions tastefully blends a variety of authentic Latin American folk rhythms with Alex’s eclectic musical personality. One such example is “Chacarera,” a through-composed piece based on the traditional Argentinian rhythm of the same name. This piece features a freer, open piano introduction derived from the main theme, and a groove section that eventually shifts into a funk-driven, soulful groove inspired by Herbie Hancock’s Headhunters band. The melody on this piece is passed between guitar, played by Matt Stevens, and bass, underpinned by traditional chacarera comping by guitarist Eric Kurimski and traditional bombo leguero played by percussionist Franco Pinna. Most notably, “Chacarera” features a field recording from the jungle of St. John, in the US Virgin Islands, taken by Zach while the trio was touring there. Another jubilant example of Alex’s musical blending ability is found on “Anthem,” loosely inspired by tumba music, a six-eight groove form from the island of Curacao. “Anthem” was originally written by Alex with the musical personality of long-time friend and collaborator Warren Wolf in mind, but ended up growing into something larger than any one individual musician. “Anthem” features a pseudo metric modulation: while the groove remains in six-eight, it is divided over a two-bar cycle into a bar of five-eight and a bar of seven-eight. The end result is a playfully disorienting but irreparably fun piece with a unique interaction between melody and groove. In addition to the jovial, celebratory rhythms found on The Dark Fire Sessions, the album also features introspective writing, found on the track “See You Again.” “[Some of my writing] is based on deep emotions that I sometimes have trouble expressing with words,” Alex says. “Often when I’m feeling a bit blue, I’ll sit down at the piano and try to come up with a tune that really expresses how I feel, and definitely some of this music was that.” On “See You Again,” listeners experience a deep sense of raw longing and melancholy that aches as it strikes one’s heartstrings. “I generally tend to keep these emotions to myself and try not to be too blatant about them…hence why I write the music.”

In addition to Alex’s long standing trio of Zach Brown and Eric Doob, The Dark Fire Sessions also features long-time collaborator and friend, percussionist Paulo Stagnaro. “We’ve been playing together for so many years that I think we really have a special connection,” Alex says of Paulo. Alongside these four, The Dark Fire Sessions invited a host of guest artists, including guitarist Matthew Stevens, drummer and percussionist Franco Pinna, guitarist Eric Kurimski, Lucas Apostoleris on steel guitar, multi-instrumentalist Sebastian Natal on candombe drums, and Sergio Martinez, who recorded flamenco percussion remotely from Spain for the track “New Flamenco.”

Long after the studio itself has closed its doors, Alex Brown’s The Dark Fire Sessions remains as a poignant reminder of the legacy of collaboration, determination, and the beauty of creativity. With a flawless execution that can only be achieved when multiple masters work together to make something greater than themselves, The Dark Fire Sessions steps beyond genre conventions, ensemble expectations, and confines of the normative to celebrate brotherhood and expression in a way that lasts long after the playback stops.

All music by Alex Brown