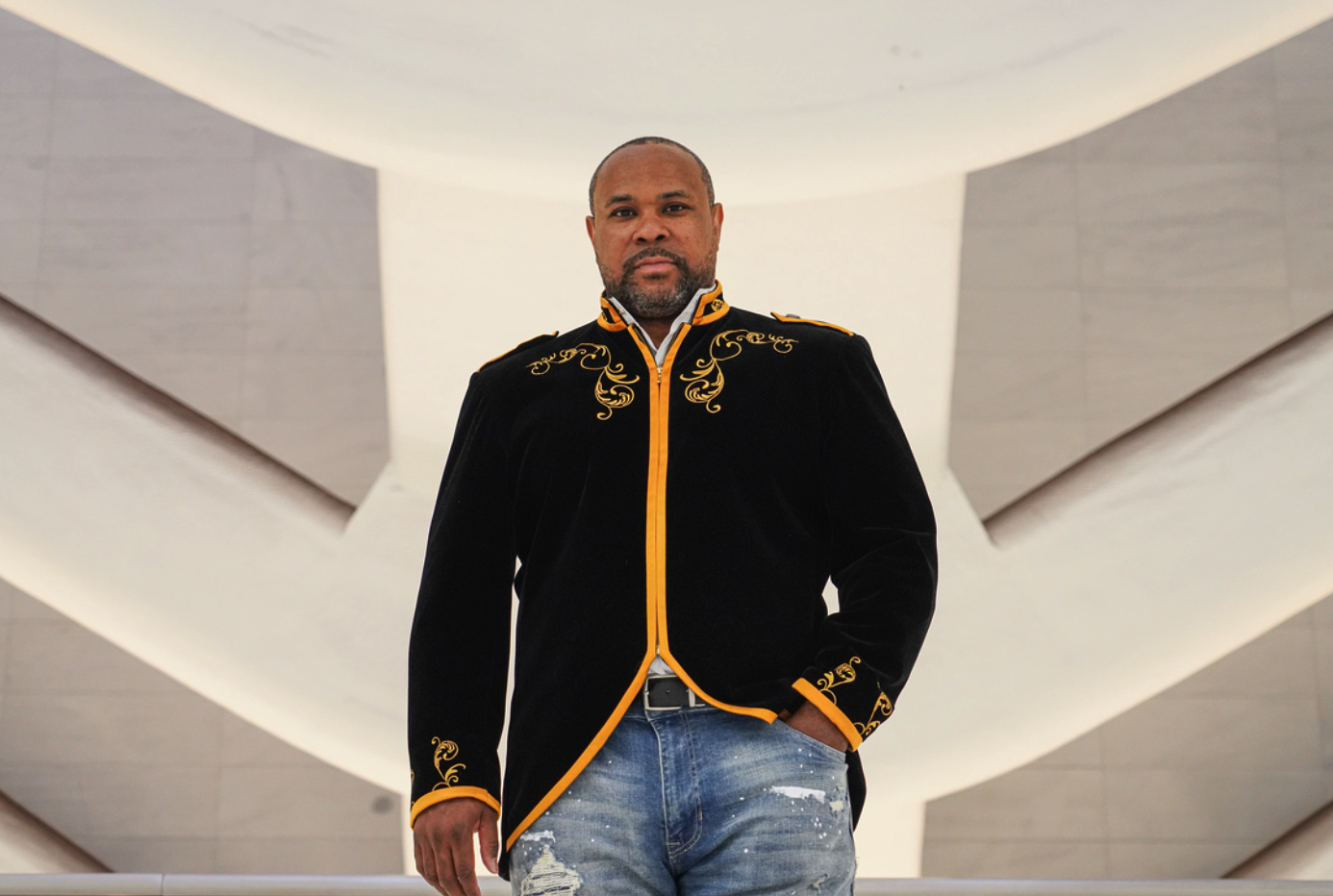 Pianist, organist, producer, and arranger Shedrick Mitchell is thrilled to announce the release of his new album What Do You Say? A euphonic masterwork featuring a heavy-hitting ensemble of celebrated musicians, Mitchell’s first ensemble offering since 1997 embodies the St. Louis native’s compelling need to express his innermost depths, while simultaneously reflecting his relation to the outer world. As 2020 found the global collective gripped by grief, turmoil, and injustices, Mitchell turned to his artistry as a means of catharsis, finding strength and ascension. Mitchell exquisitely synthesizes classical, jazz, blues, and gospel as a means of honoring the fullness of his experiences and musical vocabulary. What Do You Say? was released digitally on August 13th exclusively on Bandcamp and on all platforms as of September 16th.

“It began with my dad,” Mitchell says with respect to the genesis of his new album. “We were having a conversation, and I was humbly bragging about working on a project that wasn’t mine, and he was just like, ‘Shed…I don’t want to hear you talk about another project until you start to do your own. Please don’t let me close my eyes, and you not put out another record.’ That hit me like a ton of bricks.”

Mitchell is undoubtedly one of his generation’s foremost influential musical voices. The significance and distinction of his sound cannot be overstated, evidenced by his credits on over 200 recordings during the last 25 years. Mitchell’s musical adeptness has been recognized by some of the greatest musicians of all time, and since arriving on the New York scene in the mid ’90s, he has graced his virtuosic brilliance upon the likes of Kenny Garrett, Dianne Reeves, Christian McBride, Keyon Harrold, and Roberta Flack. In addition, he performed and/or recorded extensively with Maxwell, Stevie Wonder, and the late icons, Aretha Franklin and Whitney Houston.

But Mitchell’s legacy is about much more than the remarkable roll call of luminary musicians who have consistently sought out his prodigious artistry for more than two decades. “I cannot leave my legacy just saying I’m the guy behind the music. I have things to say about this music, too.”

As if there were any doubt in his father’s wise counsel, his auspicious message would double down in urgency within the coming days, when Mitchell himself fell ill in March of 2020. As symptoms of COVID-19 seized him with a fierce and swift onslaught, before he could grasp what was happening, Mitchell passed out in his Brooklyn home. “I asked myself, ‘What if the Good Lord had taken me out of here?’ When I came to, I was as clear as a bell. I promised myself once I recover, I’m getting to work. I got past COVID-19 with no negative effects afterwards, so I started working out again, and then I said, ‘I’m going into the studio.’” Mitchell released three solo piano projects, including a holiday album, in the wake of his epiphany, and on his birthday in August, he was recording his fourth project in one year.

“It’s hard to put certain music in a box,” he says. “Jazz — to me — is improvisation and whatever that means, but I just love music. The project connotes jazz, and you hear us improvising and taking solos, but for me, this album is about what I embody…I want this record to be all of who I am.”

More about What Do You Say?

“The Truth, The Way, The Light” is a spiritual commencement of Mitchell’s rebirth after overcoming a series of personal trials. The title, which references the biblical scripture John 14:6, reaffirms Mitchell’s commitment to his faith and serves as a guide in his musical offering as he takes the listener on a journey of his artistic metamorphosis.

The title track, “What Do You Say?” is performed by outstanding vocalists Aaron Marcellus and Ayana George. Marcellus, a multidisciplinary artist and 2011 American Idol finalist, is a refreshing marvel whose ingenuity partly exists within his stunning vocal prowess which intersects with a rare purity and mindful ease. Singer and actor George has developed a reputation singing background for many of the world’s greatest singers, including Kim Burrell, Shirley Caesar, Karen Clark Sheard, Mariah Carey, Mary J Blige, Jazmine Sullivan, and most currently, John Legend. Now emerging as a frontwoman in her own right, George displays an impressive amalgam of vocal clarity, range, and gorgeous sentimentality.

Written by Haynes and Mitchell, “Memories” is dedicated to the versatile drummer’s late father. Also a musician, Haynes’s father was a primary influence in his musical palette, namely by encouraging him to dig into multiple musical genres from an early age, a guiding principle that has served him well, as he has played with artists ranging from Lady Gaga and Kanye West to Meshell Ndegeocello and Marcus Strickland. The mantra-like 5/4 ballad features Felder, Wilkins, and a choir of beautifully layered vocals from Marcellus.

A climactic point in the album’s sequencing, Mitchell and company unleash on the infectious, up-tempo minor blues, “E.A.D.B.” the album’s sole straight-ahead composition. The band stretches out harmonically and rhythmically, blazing through the form with fiery intensity. There is a spirit of Mitchell’s longtime piano hero, McCoy Tyner, in the thunderous aura of the piece, including the build of Mitchell’s searing solo and Haynes’s relentless percussion. A golden moment on the album — including shining performances from Felder and Wilkins — particularly for those less familiar with his jazz chops, Mitchell offers a thrilling reminder of his improvisational prowess. “That’s what this record is,” says Mitchell. “A reintroduction to the totality of who I am and what I’m about, really.”

“The Don Medley” pays tribute to three men with whom Mitchell has cultivated deeply meaningful experiences over the last decade. Here, Mitchell exhibits his well-known and lauded talent for arranging popular songs, giving splendid reverence to R&B star Maxwell’s “Whenever, Wherever, Whatever,” Michael McDonald’s “On My Own,” and the iconic Stevie Wonder ’80s gem, “Overjoyed.” Marcellus effortlessly weaves through Mitchell’s arrangements, lush with beautiful harmonic intricacies, while simultaneously placing an impressive spin on the classic tunes. Measured in his approach, Marcellus takes listeners on a steadily intensifying journey, as Mitchell’s arrangements gloriously hoist these classics into the ether leaving nothing unsaid in terms of his clear veneration of this trio of musicians.

Marcellus leans into his gospel roots with an indelible performance on “FAITH,” which features a stunning arrangement from Geoffrey Keezer. Mitchell being the son of a preacher, gospel is central not only to his artistry, but it is a lifeline between himself and the devoted audience he has cultivated in the gospel realm, as a musician of almost legendary status within the genre. He is intentional about celebrating this element of his musicianship as he coalesces the facets of his artistry on this song, which is a loose ode to the Vanessa Bell Armstrong classic, “Faith That Conquers.”

“We have to go to the root…we have to go to the cause.” — this prescient prose of Malcolm X swells in an ancestral echo to open “BLM,” a stunning declaration of black excellence and black humanity in the tradition of the likes of progenitors Gil Scott-Heron and KRS-One. Featuring gifted breakout artist and emcee Oswin Benjamin, who made his acting debut co-starring in the critically acclaimed film, The Forty-Year-Old Version (2020), the song offers a brilliant indictment of America and its oppressive systems central to black suffering as if heeding to the call of the song’s opening words. Simultaneously, Benjamin sermonizes on the inextinguishable greatness of blackness, as he defiantly proclaims, “The art that we created out of desperation / Genres we’ve established through our pain and improvisation / There’s a pride that can’t be killed inside my pigment / My race full of resilience.”

“I’m conscious enough to know that we’re in an important time,” says Mitchell. “Of course, black lives have always mattered, but with everything that happened in 2020…from George Floyd to Breonna Taylor, [I want] to musically speak on that, just like Marvin Gaye was talking about ‘What’s Going On?’ So, this record is also embodying everything that’s been going on during the pandemic, just as it embodies every part of who I am as a musician and producer.”

“Nowhere to Run,” picks up on Benjamin’s themes in testimony to the ancestors and the tradition of resistance. “Historically, we had to face what we were dealing with,” says Mitchell. “We didn’t sweep things under the rug; we had to be prepared to fight.” As the band recalls the connection to Africa and the rhythms of the diaspora, Swahili war chants bearing the message, “We are going to war / We triumphed over the enemy / We have victory,” frame the song in a propulsive 6/8 motif and pentatonic melodic phrases, with impassioned solos from Mitchell, Wilkins, and Felder.

“Human Kin” welcomes Oswin Benjamin and Aaron Marcellus back to offer an arresting benediction. The album’s closer avoids the pitfalls of simplistic pleas for persistently oppressive entities to have some miraculous voluntary change of heart. Rather, it condemns systemic racism from both a historical and spiritual lens, while challenging those in power to morally upgrade for the sake of humankind.

In many respects, the idea of prolificacy during a time of such universal uncertainty feels unlikely. Tragedy can be an unwelcome and difficult manner in which to catalyze transformation, and this process is uniquely inextricable to the black American experience. Mitchell’s articulation of personal pain and triumph, hope and veneration, appeals for justice, and a reaffirmation of black resilience and virtue are a testimony to this enduring tradition. At the center is a willingness to surrender to a higher call, to honor the wisdom of his father’s urging to “put the love and intention into my work as I do for others’ projects,” in order to fully arrive at the next chapter in his body of artistic expression.

“This record is like a rebirth,” Mitchell says. “I put out the three other albums in 2020, but this record, the jazz record…this is the one. This is a return to what people remember of me when I first came on the scene, and it is certainly a continuation…now, I’m much more mature in my playing. I have so many things to ‘say,’ and so many things that I have to offer. So, it’s a rebirth of me and my mindset as an artist and as a leader.”