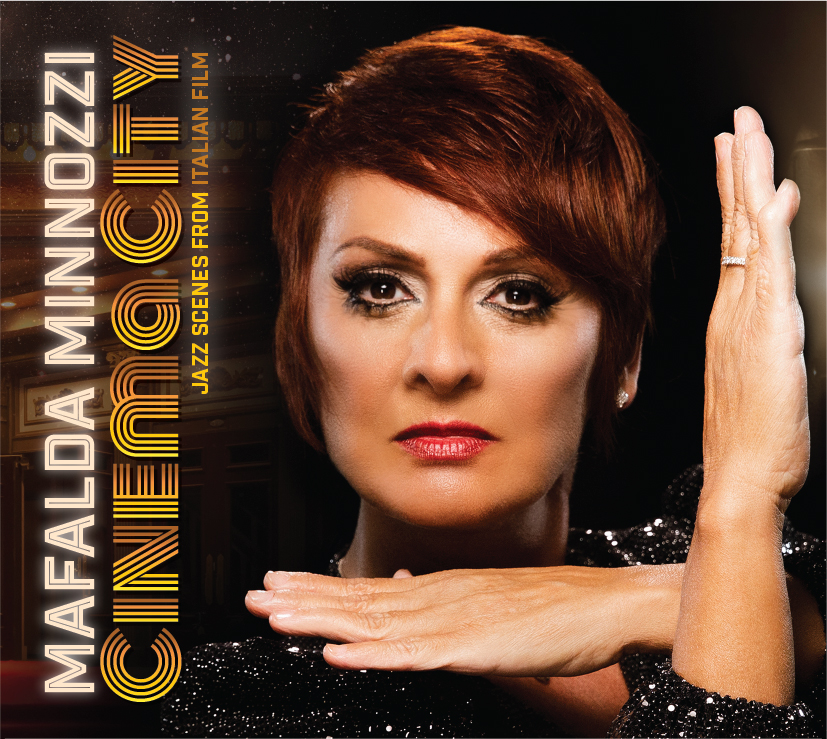 Renowned vocalist Mafalda Minnozzi is thrilled to announce the release of Cinema City – Jazz Scenes from Italian Film. On her new album, which is due out on October 1, 2021, the inimitable Minnozzi uncovers a new side as she explores the Italian cinematic songbook in the company of her first-rate band and special invited guests. Joining Minnozzi on this delightful musical journey is Musical Director and guitarist Paul Ricci and Brazilian musicians Tiago Costa on piano, Sidiel Vieira on bass, and Ricardo Mosca on drums. Special guests include Grammy-nominated saxophonist Dave Liebman, Graham Haynes and Luca Aquino on flugelhorn, Art Hirahara on organ, and Brazilian trombonist Jorginho Neto.

Jazz music has long taken cues from the silver screen. Charlie Chaplin’s “Smile” and Johnny Mandel’s “The Shadow of Your Smile” are hallmarks in the jazz repertoire, and “My Favorite Things” from The Sound of Music remains one of John Coltrane’s most enduring performances. On Cinema City, Mafalda Minnozzi sets out to embrace a different songbook than the usual American fare – one from her native Italy with a distinctive flavor that only Morricone, Mancini, Cipriani, Nino Rota and their compatriots could offer to the jazz language.

It may seem like a daring artist shift from Minnozzi’s critically acclaimed and chart-topping 2020 release Sensorial – Portraits in Bossa and Jazz, which was recorded in New York City and dedicated to the great composers of Brazil. But Cinema City is indeed a continuation of this work, as she once again displays her virtuosic style and sensibility informed by her travels and experiences in Italy, Brazil and New York City.

On this zestful musical exploration, Musical Director and guitarist Paul Ricci (who has worked with a who’s-who of musical greats including singers Astrud and Bebel Gilberto) has employed a first-call Brazilian trio to augment Minnozzi’s vocal colors and adventurous improvisations over the particularly lush harmonies and trademark sonic innovation that Italian soundtracks have provided the world. This carefully curated collection of music offers something new to Cinema City’s stellar special guests as they explore creative arrangements that at times blend the iconic Italian use of baritone electric guitar and organ with a classic quartet, and at other times, recall the work of Miles Davis and Gil Evans, who famously reframed Gershwin’s Porgy and Bess and Spanish classical music in a moody jazz improvisational setting.

Cinema City was conceived and recorded in Brazil during the COVID-19 lockdown. The forced hiatus gave Minnozzi plenty of time to reflect, and acted as a catalyst for this deeply personal and creative project. “It occurred to me that just as the character Totò, from Cinema Paradiso, revisited his life via the clips from the films he grew up with, I too sang these songs as if they were scenes from life. They reconnected me with what they meant to me from my childhood all throughout my artistic evolution,” shares Minnozzi. With the exception of the English lyric on the little known Henry Mancini composition “Loss of Love”, all the music on Cinema City accompanied the singer throughout various peaks and valleys of her life.

Cinema City starts off with “La Dolce Vita”, the iconic Nino Rota tune from Federico Fellini’s 1960 film of the same name. Combining a touch of New Orleans, this joyous opener features the great Graham Haynes on flugelhorn and prominently features Minnozzi’s expert scat singing. “This track had me flashing back to the many lunches I had sitting across from Fellini at a tiny Roman cafe we both frequented, and the quick conversation and courteous nods we would exchange with a smile,” Minnozzi reflects. Haynes is also featured on “Amici Miei” which comes from the cult film of the same name and elicits Minnozzi’s childhood memories of growing up in the back of her father’s restaurant in Italy.

Another highlight is “Cinema Paradiso”, which features special guest NEA Jazz Master Dave Liebman. For those familiar with the film, it is impossible to hear Morricone’s title track without being transported to its emotional beauty and power. Augmented by drummer Ricardo Mosca’s tasteful Afro-Latin percussion, Liebman and Minnozzi create a positively hypnotic atmosphere together that is at once meditative and explosive. In addition to the title track, Minnozzi takes on two other songs from Cinema Paradiso including “Se” and the album closer “Maturity”. The film holds special significance for Minnozzi. In 1996, she was invited to perform at Paradiso, a club in Rio de Janeiro modeled after the film. This short engagement (which resulted in her 1996 album Uma Noite no Paradiso II) began the singer’s 25+ year relationship with Brazil, which became her second home.

Pianist Art Hirahara joins on organ for five tunes. The first feature is “Anonimo Veneziano”, which comes from the 1970 film about romantic reconciliation of a past love at the end of a life. The richness of the story gives Minnozzi all the dramatic inspiration she needs to soar as this tune perfectly exemplifies her ability to turn heads with her remarkably dynamic and melodic range.  Prolific composer Stelvio Cipriani, who would often listen to the singer perform at famous club La Cabala, displays a distinctly Italian sensibility in his writing as the song undergoes multiple key changes but still preserves an organic, natural mood. The second feature for Hirahara is “E La Chiamano Estate”, which was one of the first songs to pull Minnozzi toward jazz. Its composer, Bruno Martino, is best known in jazz circles for his classic “Estate” but this lesser known selection is every bit as iconic in Italian jazz culture.  Ricci’s jazz guitar imparts a tinge of Wes Montgomery that, combined up with Hirahara’s classic organ ballad sonic, align this tune with the great American jazz club standards.

Trombonist Jorginho Neto joins on “Arrivederci Roma”, which recalls Minnozzi’s time at the aforementioned La Cabala club. Made famous by Dean Martin in 1962, Minnozzi updates this classic gem with both a Brazilian Gafieira and a Latin jazz accent. Once again, an unlikely film theme serves as a perfect vehicle for improvisation and her time spent as a shining star in the Roman nightclub allows her to deliver this lyric with a penetrating touch of irony and soul. Another standout moment is “Nella Fantasia”, which features the incredible Luca Aquino on flugelhorn. Inspired by Sketches of Spain, this quintet version captures the orchestra’s timbral nuances in a small group with rapturous interplay. This too is a personal selection for Minnozzi, as “Nella Fantasia” was her wedding song.

Each track on Cinema City imparts its own mood on the listener and the adept arrangements act as a creative springboard for brilliant improvisation. Breaking free from the more obvious classical or popular approach these songs are known for, Minnozzi takes full advantage of her dramatic interpretive power, her sublime vocal range, and cosmopolitan perspective to present her singular take on these timeless compositions. “This album is a tribute to how the poetic power of music can change a life. The songs on Cinema City connected me to my memories. Combined with the band’s brilliant playing, I was able to find a freedom that I had never felt before,” she says. “In discovering that internal voice, I drew from a deep emotional well and experienced a newfound peace looking back at my life.”