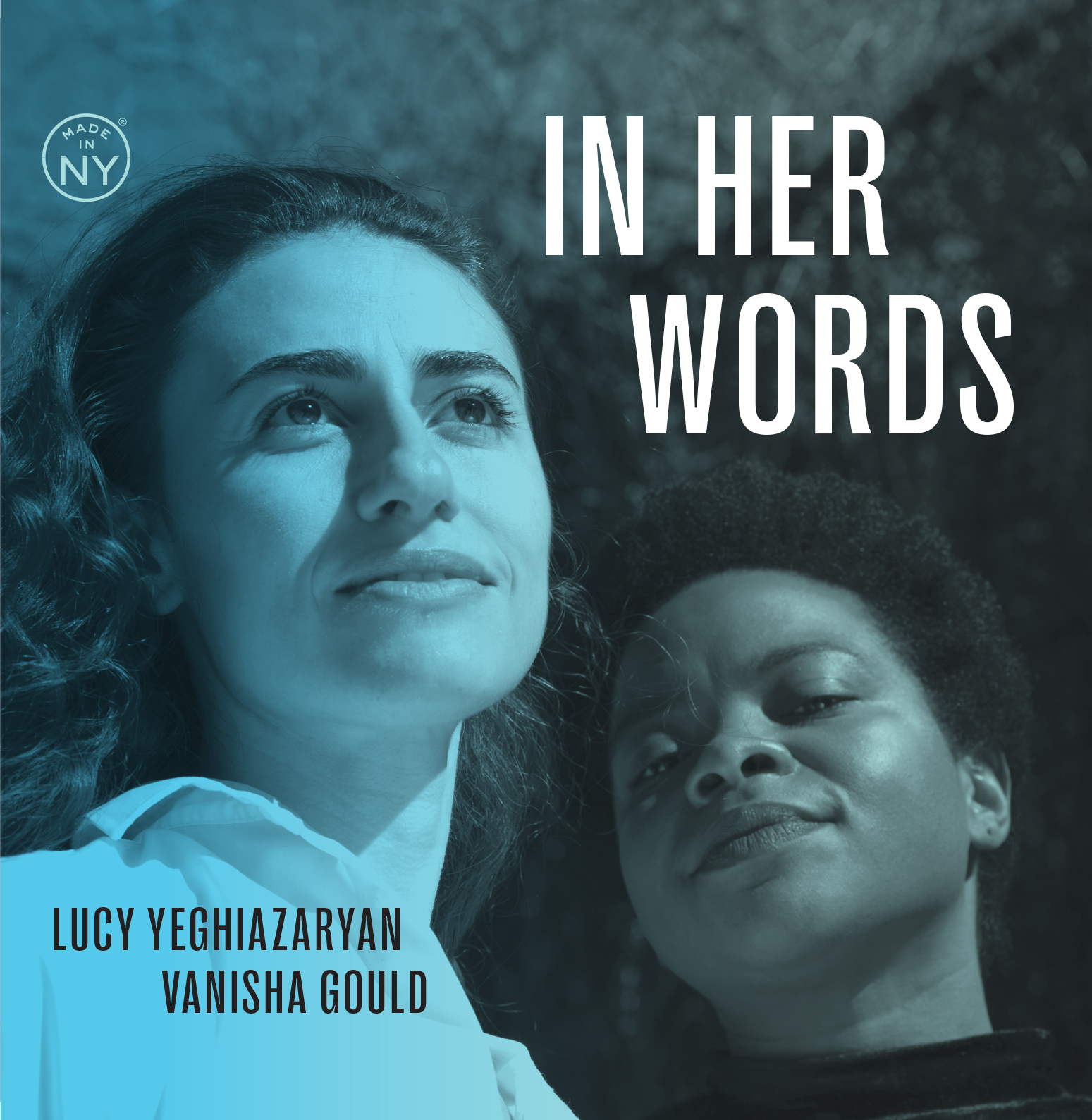 Vocalists Lucy Yeghiazaryan and Vanisha Gould Present New Album In Her Words,
A Collaborative, Open-Hearted Glimpse into the Inner Lives of Women

On September 24, 2021, New York-based vocalists and songwriters Lucy Yeghiazaryan and Vanisha Gould will release their debut collaborative album In Her Words. A twelve track collection of original compositions and carefully curated standards, this unabashedly intimate recording offers a glimpse into the private lives of women told from their unique perspectives. Joining vocalists Gould and Yeghiazaryan on this intimate recording is guitarist Eric Zolan, bassist Dan Pappalrdo, cellist Kate Victor and violinist Ludovica Burtone.

“The central goal of this project is to utilize music as a means to openly discuss the joys and pains of being a woman,” Yeghiazaryan shares. To that end, listening to In Her Words can be likened to eavesdropping on a hush-hush conversation between girlfriends over coffee as they discuss the distinct nuances of their inner lives. This authentic anecdotal variety displays a set of Gould’s compositions along with carefully chosen selections across jazz history, it’s quintessentially New York jazz sound blended with elements of swing and blues.

Yeghiazaryan and Gould depict these stories in a unique pattern; throughout the album, the two never sing as a pair, with the exception of an interlude in the back half. With each vocalist’s words showcased back-to-back rather than aside, the album imitates a real, uninterrupted conversation. From private moments of bliss to suppressed traumatic memories, In Her Words is both a sonic storybook and a pioneering concept that women can be candid about endeavors that society otherwise and often encourages them to conceal.

Speaking to a breadth of shared tragedies, the track “My Man,” a rendition of Billie Holiday’s 1951 signature recording, tells the story of those who remain with physically abusive men, ironically placing the singer as the messenger of love, despite she herself being loveless and forgotten by the onlookers. Another original, “Cute Boy” openly croons about a crush without the reluctance of the expected false chastity of a woman. “Love Isn’t Everything” comically outlines the dangerous game of pretend before finally revealing that we all need love while “Gypsy Feet” talks about a restless woman who gives love but can’t commit. With the range of this conversation, In Her Words provides volume to the chronicles of a woman’s love life, both dark and light, and all tinged with passion.

This is the first recorded collaboration between the two vocalists, who are both mainstays on the contemporary New York jazz scene. Yeghiazaryan notably rose to prominence in 2019 with the release of her debut album Blue Heaven (Cellar). Originally from post-Soviet Armenia, Yeghiazaryan has established herself as a leading voice on the jazz landscape in New York and beyond with regular appearances at top venues and festivals. California native Gould has been taking the city by storm since she relocated over five years ago. Gould can be heard regularly at various clubs in New York as a featured vocalist.

“For me, collaborating with Gould means celebrating the strength and comfort of unity between women instead of the all too prevalent rivalry,” Yeghiazaryan shares. “This album is a glimpse of the multitude of moods, thoughts, joys and disappointments of every woman. The songs and their messages are very forward and perhaps jarring at times but that’s what makes them real and my hope is that all who listen will find comfort in a song or two.”

This project was generously funded by a grant by the New York Foundation Arts 2020 Women’s Fund.