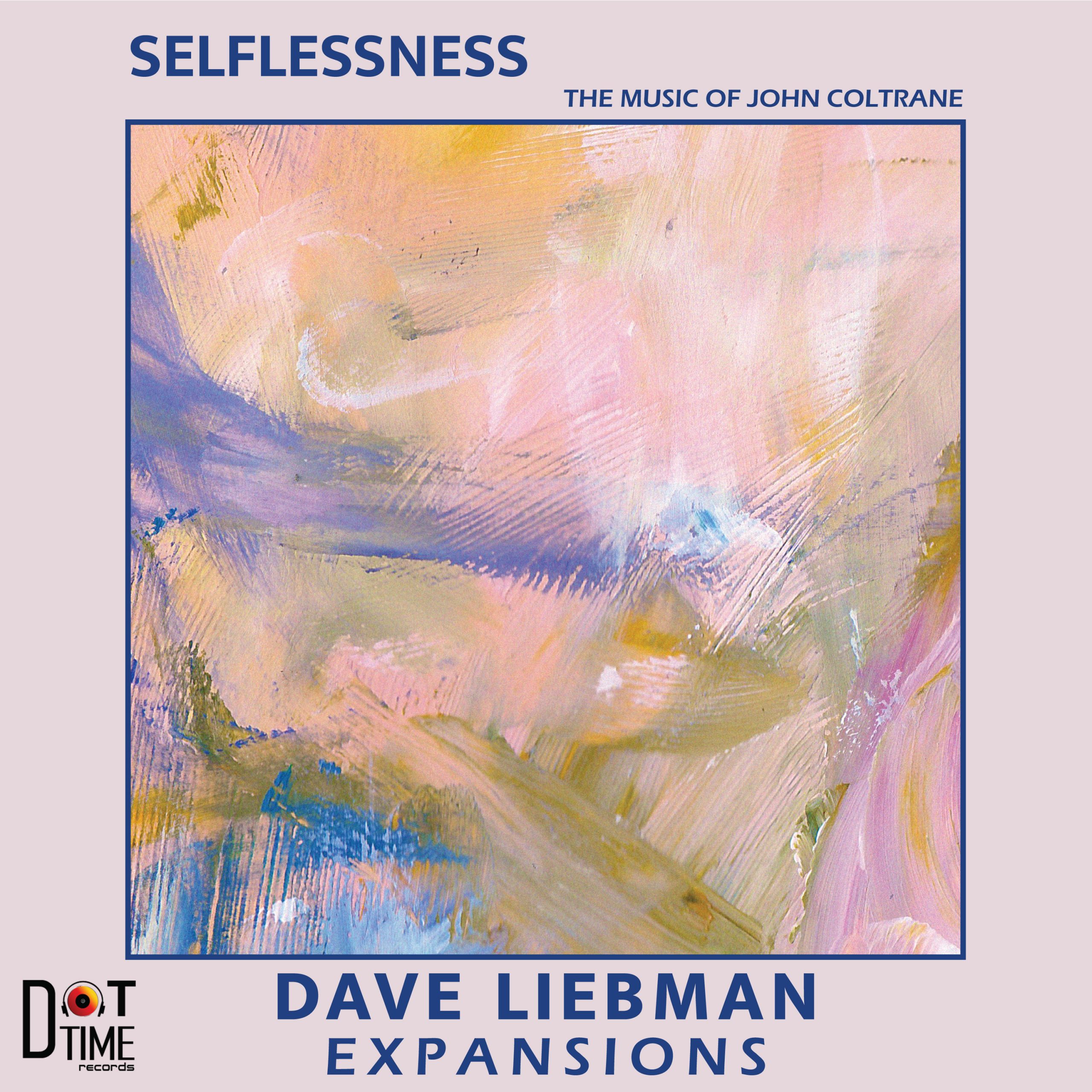 “I have been “Chasin’” the Trane for 60-plus years. I can honestly say that he was greatly responsible for who I am..and who I wish to be,” – Dave Liebman

Dot Time Records is proud to announce the release of Selflessness, a new tribute to John Coltrane from NEA Jazz Master and Grammy nominated saxophonist Dave Liebman. Due out September 3, 2021 – one day before Liebman’s 75th birthday – Selflessness showcases nine newly-arranged and rethought Coltrane classics by Liebman and his forward-thinking working band, Expansions. Joining Liebman, who plays soprano saxophone exclusively on this recording, is alto saxophonist Matt Vashlishan, pianist Bobby Avey, drummer Alex Ritz, and bassist Tony Marino. To celebrate the release, Liebman will perform at the newly reopened Dizzy’s Club Coca-Cola at Jazz at Lincoln Center on September 4th and 5th. This title will be available as a digital download, a CD, and a special edition, hand-numbered vinyl LP.

Dave Liebman has always declared that if he had to name one primary influence and inspiration, it would be John Coltrane. The first time he saw Coltrane at Birdland in February 1962, he was 15 years old. As he recounts in his autobiography, What It Is, that was the night he saw the light, though he didn’t realize it for years. “Once you see the light,” he explains, “you can never turn away from it, though you may try. I went to see Coltrane from then on, anytime I could.”

Selflessness is the latest in Liebman’s Coltrane-tribute catalogue which includes titles such as Homage To John Coltrane, Compassion (with Joe Lovano), Joy (with the Dave Liebman Big Band), John Coltrane’s Meditations, and Lieb Plays the Blues á la Trane. He also has participated in various Coltrane tributes such as “Live Under the Sky”, a famous concert in Tokyo with Wayne Shorter in 1987.

It’s beyond evident, as well, that Liebman has a unique and recognizable style, a strong musical personality that is in no way an imitation of Trane’s. That is clear right from the first number,

“Mr. Day.” Liebman is an NEA Jazz Master for good reason— his fluency, clarity and originality on soprano are mind-boggling. Coltrane recorded “Mr. Day” in September 1960 for Roulette Records and again for Atlantic Records in October 1960. When Roulette released theirs in the fall of 1961, it was called “One and Four.”

The name “One and Four” referred to the bass ostinato, which hits on beats one and four—but that’s not the case in this arrangement by drummer Alex Ritz. As Ritz explains, in his version “The theme is entirely in a ‘Big 5’ or 10/4 — I wrote it in alternating bars of 6/4 and 4/4. The idea started by ‘extending’ the iconic bass figure of the song by a couple of beats, then creating a ‘play’ on the piano ostinato in this new meter, and finally adapting the melody to fit within those two repeated parts. The only deviation from this pattern is the walking bass figure in the turnaround, which is basically dotted quarter notes in the 6/4 bar and quarter notes in the 4/4 bar.” Vashlishan’s brilliant alto sax solo takes place over a swinging 4/4. The “Big 5” returns for Avey’s adventurous piano solo, over Ritz’s inventive drumming, and then for Liebman’s solo.

“Compassion” creates a haunting mood, in Liebman’s arrangement, with Vashlishan on wind synthesizer and Avey on his Vintage Vibe—a modern electric piano that looks like a Wurlitzer but sounds more like a Fender Rhodes. The next track opens with a long and dramatic solo piano improvisation that draws upon and leads into “My Favorite Things.” It’s probably the most famous waltz in jazz, but here it’s in 4.

“Olé” was Coltrane’s arrangement of a folk song from Spain called “Venga Vallejo.” It was listed as a Coltrane composition because record companies used to be in the habit of crediting as many numbers as possible to the artist who they had under contract. That practice benefited both the artist and the label financially, whereas a “public domain folk song“ gained them nothing, and credits to composers not under contract actually cost them money. Similarly, Impulse credited the public domain “Spiritual” to Coltrane. Liebman’s introduction to “Olé” highlights the folkloric origins of the song through the use of his wooden flute and Ritz’s frame drum. But Avey’s keyboard introduces a guitar-like distortion effect into the proceedings. Vashlishan plays clarinet on this one.

The next track is Vashlishan’s contribution as an arranger. This original take on “Lazy Bird” offers a new chord progression, and a rhythm that is Cuban-esque but played in a free and open manner. This is followed by a poignant rendition of “Peace on Earth”, featuring Liebman and Vashlishan’s flute.

In Liebman’s arrangement of “One Up, One Down”, the theme is followed by an extended drum solo over the rhythmic “hits.” Then there’s a fiery duet of drums and soprano. Liebman notes that they were “attempting to capture the way Trane and Elvin would play duo somewhere in the set. These duos went beyond the pale in terms of energy, passion and technique, never encountered in jazz at that level.”

Coltrane had become interested in concepts such as “Selflessness” through his readings on Eastern religions. In Avey’s re-working, a somewhat funky and somewhat “broken” drum pattern comes in after the theme, adding electricity to the various solos.

The last track, “Dear Lord,” slows the pace down. It begins with Marino’s leisurely, meditative bowed bass, alone. Vashlishan enters with the melody on flute while Liebman improvises around him, supported by clouds of sound from Avey’s keyboard, Marino’s long bowed tones, and splashes of color from Ritz. It makes a fitting end to this beautiful tribute to the master, John Coltrane.

All music by John Coltrane.