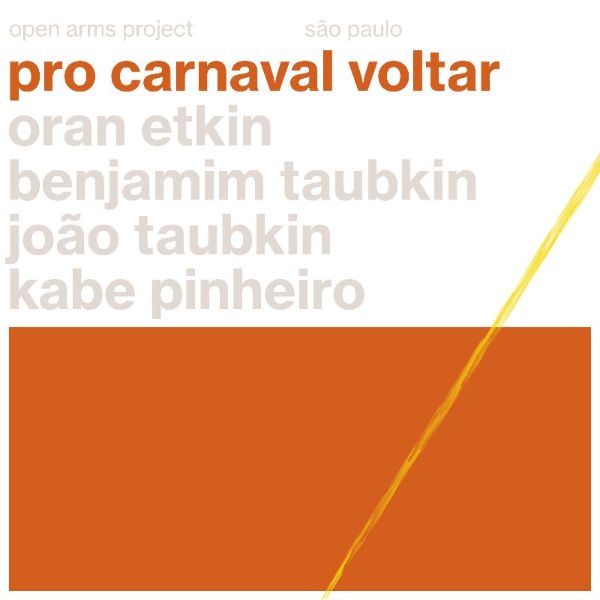 On February 12, the first day of Carnaval, Oran Etkin & Benjamim Taubkin quartet will release its debut single, “Pro Carnaval Voltar” (For Carnaval To Return).  The piece is a musical prayer for healing and a call to action to slow the spread of Covid that has ravaged both Brazil and the US and exacerbated existing inequalities in both countries.  It comes as Brazil’s official Carnaval events have been canceled for the first time in 108 years.

The track starts with a prayer-like chant in the piano and is soon joined by grooving counter-rhythms in the bass-clarinet and bass with ebullient percussion pushing the energy forward. After a brief slow and introspective interlude in the middle, the music builds back up into a roaring Samba dance feel as Etkin soars high above with his clarinet.  While the composition is deeply rooted in traditional rhythms, the band is also very free and open in its interactive approach, celebrating the inextinguishable spirit of vitality that is at the core of Brazilian Carnaval culture.

Etkin and Taubkin were introduced two years ago by Dubi Lenz, the director of the Red Sea Jazz Festival in Israel, and they immediately found a deep musical connection.  Taubkin recalls, “Oran came to São Paulo, and I was a guest on a performance he gave at Jazz Nos Fundos and again at Jazz B some months later. The bond came very easily.  As we say here in Brazil- this is my new friend from childhood!”

Last year Etkin was invited again to Brazil during Carnaval, and the two decided to organize a collaborative recording session, inviting bassist João Taubkin and percussionist Kabé Pinheiro.  The music fresh and new – written for the occasion on the weekend before the recording. Pro Carnaval was composed by Etkin, and the quartet’s next single “Barco” will be a composition written by Taubkin. “I wrote this music in the midst of Carnaval last year – inspired by the energy of the streets filled with resilient rhythm and joy,” says Etkin. “Now we find ourselves in much darker times, but that energy of positivity that is at the core of Carnaval can still provide strength to cary us into a brighter future”

Last April, as the world was closing down, Etkin’s response was the Open Arms Project: a series of singles & videos highlighting various collaborations with great masters around the world – each characterized by a deep human bond formed out of a sense of listening and mutual respect.  The tracks were filmed and recorded in Rio de Janeiro, Harare Zimbabwe, Prague, Paris & São Paulo with musicians including Danilo Caymmi, Benjamim Taubkin, Thomas Enhco, Musekiwa Chongodza and more.

Oran Etkin has been described as “great clarinetist, excellent improviser” by Ben Ratliff of the New York Times and “composer of eminent individuality” by Yusef Lateef. He was voted #1 Rising Star Clarinetist in DownBeat Magazine’s Critic’s Poll and has performed as a leader at venues including Montreal Jazz Festival, North Sea Jazz Festival, Jazz at Lincoln Center, WolfTrap, Kennedy Center and more. He has been invited twice to be a guest lecturer at Harvard University and is also the founder of the Timbalooloo educational program for young children. Etkin released six albums as a leader including four on the Motema label. Etkin’s duo concert with Sullivan Fortner in Paris was chosen as one of the Top 6 Musical Highlights of the year by Libération, which described it as “a concert of weightlessness, class, spark, inspiration and sharing. Magic uninterrupted for two hours. The crowd went wild. For such is the music of Etkin: sensitive to the exchange with the audience.”

Pianist, composer, arranger and producer Benjamim Taubkin has created a distinct voice within Brazilian music and its intersection with music from all over the world. He has recorded 20 albums  as a leading artist, most of them on his own label – Nucleo Contemporâneo, and appears on over 150 other albums as guest musician, producer or arranger. Taubkin has traveled the world presenting his music from solo to Symphony Orchestras, collaborating with musicians from Morocco , India, South Africa , Korea , Israel, Colombia, Argentina and Spain. He has performed with a.o, Paulo Moura, Rafael Rabelo, Monica Salmaso, Zizi Possi, Nana Vasconcelos, and in special projects with Hermeto Pascoal, Milton Nascimento, João Bosco.