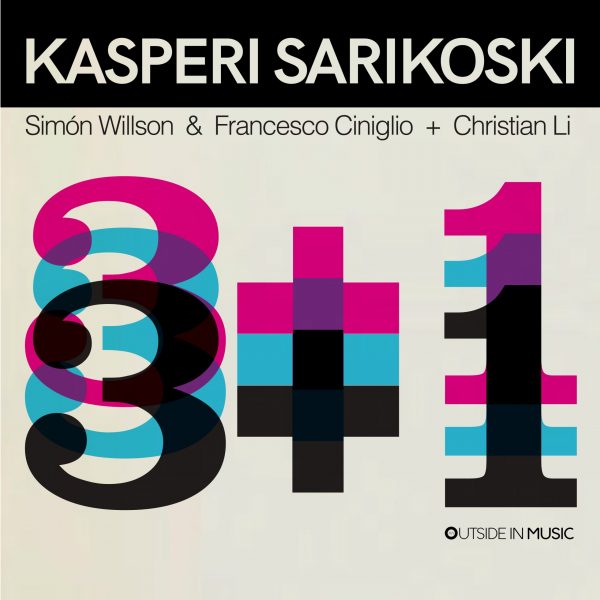 Finnish Trombonist and Composer Kasperi Sarikoski Announces his Evocative Sophomore Release 3 + 1, Out October 23 on Outside in Music

On October 23rd, Finnish Trombonist and Composer Kasperi Sarikoski will release his sophomore effort as a band leader, 3 + 1 via Outside in Music.  A follow up to Sarikoski’s 2015 debut album Essence, 3 + 1 features a unique instrumentation of trombone, bass and drums with the addition of a comping instrument, piano, on only one track – hence the name of the album 3 + 1.  This instrumentation gives the album a distinct sound, while the abundant interplay among the trio reveals the contrasting personalities of its members.  The tracks on this release, all original compositions by Sarikoski, take influence from contemporary jazz records of the 21st century.  3 + 1 features Sarikoski on trombone alongside Chilean bassist Simón Willson and Italian drummer Francesco Ciniglio.  For the album’s fifth track, the ensemble is joined by pianist Christian Li.

Creating a trio recording of this nature had been an exciting prospect to Sarikoski for several years, the composer notes “Being a sole horn player without the backup of a pianist or guitarist brings a lot of responsibility and challenges one to find ways to keep the listener captivated from track to track.”  Ultimately, the group achieves a full and natural sound, each player complimenting the next with thoughtful dynamics and stellar rhythmic and melodic acuity.

Sarikoski and Ciniglio first met in 2017 as students at The Juilliard School where they got to know each other’s playing very well.  The three musicians first played together at Smalls Jazz Club as part of Francesco’s ensemble.  The composer had met guest pianist Christian Li far before his arrival in New York, the two had met at the 2011 IASJ (International Association of Schools for Jazz) Conference in 2011.  Sarikoski notes “All these three are inspiring, first class musicians and I’m very pleased to have them on the album.”

The album begins with “The Opening”, demonstrating the undeniable cohesion between the three instrumentalists on the album.  The album continues with “Great Lawn Oval”, a contemporary piece with an odd time meter and a slightly folkish melody.  The trombonist showcases his stunning facility on his instrument, outlining harmonic progressions through soulful melodic lines, harkening back to Ornette Coleman’s philosophy of harmelodics.  Sarikoski notes that the melody for this song was written by the baseball fields in Central Park.  All of the compositions on this release were written in New York City, and many of them have been influenced by local places or situations.

“Onward and Upward” prominently features pianist Chrisian Li.  Providing a dramatic dynamic shift half-way through the album, Li opens the piece with dark harmonic musings from his keyboard.  Li accompanies Sarikoski throughout an impassioned solo, and then embarks on his own melodic invention before returning to the melody of the piece.  “Leonard Street” was composed by Sarikoski while spending Christmas by himself in Tribeca, a lonesome feeling encapsulated by the tune’s wistful, lyrical melody.

The ensemble switches gears with the bright-tempoed “Wide Lanes”.  Ciniglio falls into a broken swing while Willson walks fervently and the composer’s supple melodic refrains are eschewed from his horn.  Willson explores the song’s harmonic and rhythmic structure on a wonderfully eloquent solo.  After a tender introduction from Sarikoski, the group presents a warm ballad with “Such Sweet Sorrow”.  The title, a quote from Shakespeare’s Romeo and Juliet, reflects on saying goodbye to a loved one and the certain sweetness that is amidst the sadness felt in such heartfelt moments.

Kasperi Sarikoski’s sophomore release, 3 + 1,  sees the coupling of fine musicianship from an array of International musicians with innovative arranging and composition, resulting in a distinctive, fresh sound in the jazz idiom.

Kasperi Sarikoski was born in Helsinki, Finland in 1988 and began studying the trombone at age eight with Mircea Stan at the local Pop & Jazz Conservatory. In 2006 Sarikoski commenced his studies at the Sibelius Academy and received his Master of Music degree in 2013. During this time he also studied at the Conservatoire de Paris as an exchange student.

Sarikoski quickly gained a reputation as a fine trombonist and became established in the Helsinki music scene. By his mid twenties he had either performed or recorded with most of Finland’s leading jazz musicians. He also toured Sweden with various groups, including the Stockholm Jazz Orchestra.

Sarikoski performed with the reputable UMO Jazz Orchestra for the first time in 2004 and ten years later took up the post of lead trombonist. He spent three years with the orchestra, during which he accompanied many eminent artists, such as Joshua Redman, Gregory Porter, Michel Legrand and Hermeto Pascoal.

Forming his own group Nuance, Sarikoski played at many of Finland’s major jazz venues and several festivals. In 2015 the quintet released its debut album Essence which was approved by the public and critics alike. The following year the group set out on a tour of eight concerts all over Finland.

In August 2017 Sarikoski moved to New York City to further his studies at The Juilliard School, where his teachers included bassist Ben Wolfe and trombonists Elliot Mason, Steve Turre and Joseph Alessi. During his time in New York Sarikoski performed with various groups and artists, including the Jazz At Lincoln Center Orchestra with Wynton Marsalis. He has also performed alongside saxophonists Dave Liebman, Chris Cheek and Godwin Louis.

In 2019 Sarikoski received his Artist Diploma in Jazz Studies and moved back to Helsinki to rejoin the UMO Helsinki Jazz Orchestra as lead trombonist. In February of 2020 he performed as soloist with the orchestra. He continues to reside in the capital and work with a wide array of groups and musicians.