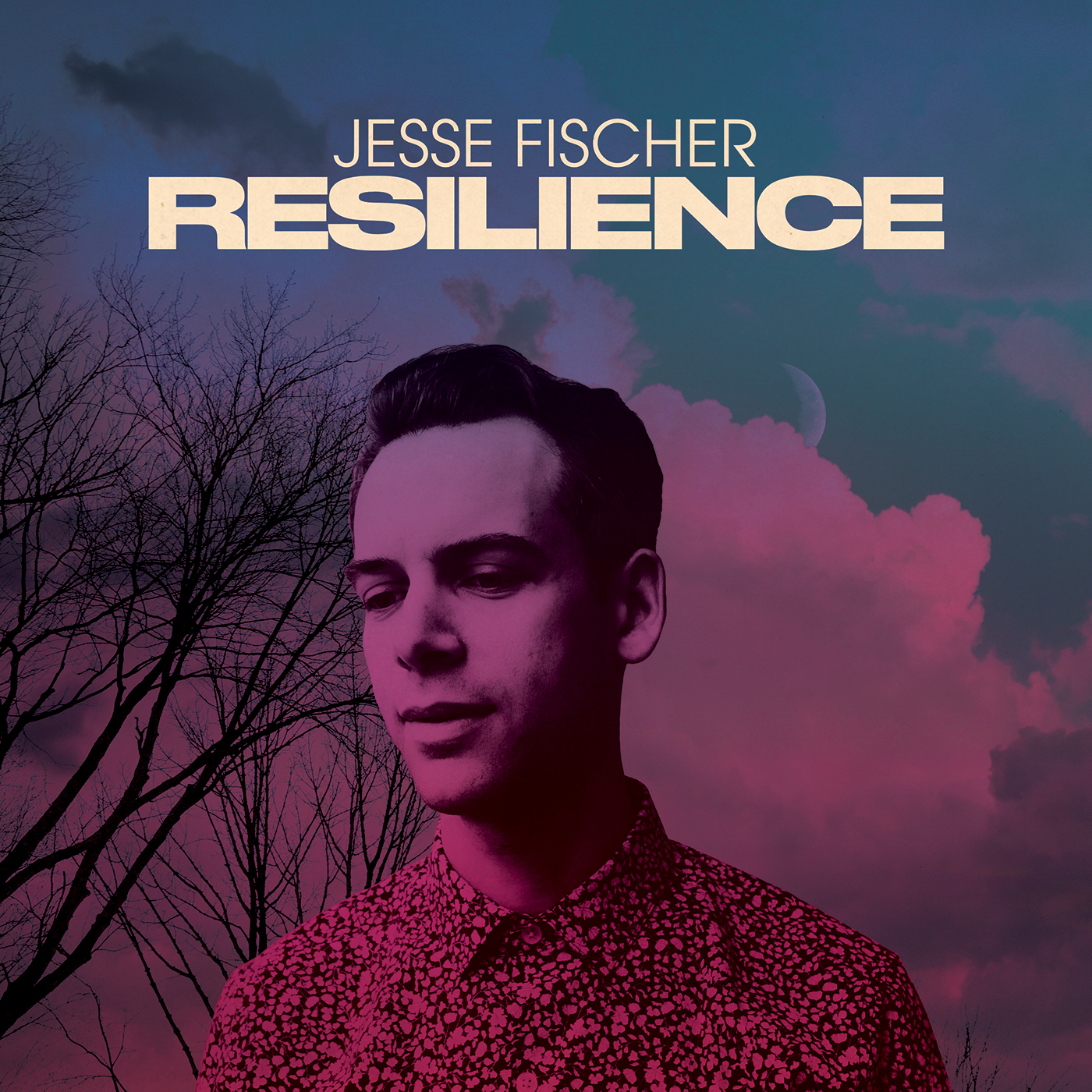 “Fischer truly flexes his depth and maturity of creating cathartic music in the space between joyful beauty and the embrace of the human struggle.”

Although the project was conceived and recorded prior to the coronavirus pandemic and the national reckoning on race and policing, many of the themes on Resilience remain all too relevant, as the title takes on new meaning in the current context. “A lot of material for this album was inspired by my feeling the world was spinning more and more wildly out of control,” explains Fischer. “I truly hope this music can bring joy, strength and comfort in these heart-wrenching times, as well as paint a picture of the cycles of oppression we seem to be caught in as a society.”

With seven instrumentals and two songs with lyrics penned by Fischer himself with co-writers Sarah Elizabeth Charles and May Cheung, Resilience is both deeply personal and necessarily political, responding to the wave of White nationalism, authoritarianism, and hate that has swept the globe in recent years. “I wrote most of this new material soon after becoming a father,” explains Fischer. “I was overcome with joy and gratitude at home, yet I was witnessing the outer world crumble into fear, xenophobia and ignorance, watching dictatorships replace democracies, ongoing state-sanctioned violence against African Americans, and the gulf between political and ethnic groups growing wider and more insurmountable.”

This odd juxtaposition led Fischer to reflect deeply about his identity as a Jewish American and the messages he wanted to pass on as a father and as a musician and creator. “I’ve always felt a double consciousness in being Jewish,” muses Fischer. “Growing up, I enjoyed all the privileges of being grouped with the majority here in the U.S. However, I can’t forget that I’m descended from people who have been oppressed over thousands and thousands of years, never really having a home nation, and so I take that knowledge as a call to action, to empathize and fight for people who are going through the same kinds of struggles that my ancestors went through — immigrants, asylum seekers, victims of police violence and discrimination in housing, jobs, education, and the justice system.”

Throughout Resilience, Fischer blends the expressiveness and group interplay of modern jazz with the restraint and sound palette of a pop record — all underpinned by a joyful, folkloric approach to groove and rhythm. Some of Fischer’s compositions feature soaring, hymnlike melodies (“Healing”, “Chorale”), while others carry the playfulness of childlike wonder (“Play Date”, “Meditation on Peace”). All convey a sophisticated approach to harmony informed both by the rich voice-leading of Western classical music and the extended harmonic ideas of contemporary gospel music.

Resilience is as much a producer’s album as a pianist’s album — Fischer shines in the producer role, both in his expert layering of woozy, analog synths, vintage keyboards, and acoustic instruments, and in assembling and directing his team of gifted and selfless side musicians. “I’m not a flashy soloist,” states Fischer. “I just like to write beautiful melodies that will stay with you, make you feel something, and to craft the perfect setting for those melodies, whether it’s piano trio, a larger ensemble, or layers of overdubs.” For this project, Fischer tapped his wide network to assemble a working group featuring trumpeter Billy Buss, saxophonist Godwin Louis, drummer Obed Calvaire, electric bassist David Cutler, guitarist Jordan Peters, and percussionist Keita Ogawa. In addition, Fischer also wears the hat of audio engineer, painstakingly crafting beautiful mixes that are as much a part of the sound as his supple playing.

Resilience opens strong with the title track “Resilience”, an ode to personal identity and strength in the face of adversity, featuring the unmistakable trumpet of Christian Scott Atunde Adjuah. “As soon as I came up with this tune and concept, I knew it had to have Christian’s voice on it,” Fischer shares. “He’s a visionary, and he’s been a huge influence on me, as a composer, improviser, and overall conceptualizer.” Fischer takes a contemplative piano solo, followed by a mournful, wailing trumpet solo by Scott, evoking the Blues as much as a doina from the Klezmer tradition, and then Fischer returns for a blistering Moog synthesizer solo over the outro.

“Healing” begins subdued, like a eulogy, and slowly builds to a joyful, raucous group improvisation, before resolving into unison. “I wrote this song the summer of 2017, the summer of so many terror attacks, police killings of Black men, and mass shootings. The news can make you numb after a while, so this was my attempt to make sense of the injustice, hatred and violence, my prayer for healing. Now in 2020, I feel that we need this healing more than ever.”

“Push/Pull” marks Fischer’s first collaboration with vocalist Becca Stevens. “I’ve always wanted to work with Becca, and this seemed like the perfect song for her,” says Fischer. “She and I both have a strong folk music background, along with an affinity for jazz, rock and world music.” The song’s lyrics, developed in conjunction with singer-songwriter May Cheung, express frustration with endless cycles of discord in politics and relationships as well as his Fischer’s own struggles with depression.

The simply named “Chorale” — marking the midpoint of the album — presents the convergence of sacred music of the European classical music tradition, the Black church, and Ashkenazi and Israeli Jewish traditions. In Fischer’s words: “I tried to imagine Glenn Gould, playing a bar mitzvah, at an A.M.E. church deep in Brooklyn… what would that sound like?” “Play Date,” evoking the uninhibited joy of children at play, pairs a fanfare-like melody with a groove heavily indebted to Fela Kuti and groundbreaking drummer Tony Allen, who recently passed away due to Covid-19.

Co-written with Fischer’s frequent collaborator Sarah Elizabeth Charles, “Same Mistakes” deals with the cycles of abuse on an individual level, as well as society’s tendency to repeat the failures of previous generations. With angular guitars and distorted keyboards, there’s a palpable anger present, mixed with resignation. “Cycles inside cycles / trying to break free,” wails Charles, over an outro vamp reminiscent of Radiohead.

Resilience concludes on an optimistic note with “Meditation on Peace”. Based on a simple mantra-like theme, the tune expands through a series of subtly shifting chord progressions over a bouncy groove based on the bikutsi 6/8 rhythm from Cameroon. Fischer trades improvised choruses on piano with soprano saxophonist Godwin Louis. “Godwin is truly a genius composer and improvisor, one of the most joyful musicians I’ve ever heard,” Fischer gushes. “Every note he plays just makes you feel good inside.”

MORE ABOUT JESSE FISCHER
Jesse Fischer is a Brooklyn-based pianist, composer, and producer. Known for his warm, soulful touch and emphasis on melody, groove, storytelling and emotion, his unique voice combines elements of his own Jewish heritage with music of the African diaspora, jazz, hip-hop, indie, and singer-songwriter genres. A two-time ASCAP Plus Award winner, Fischer has performed with many notables in the jazz, pop, and world music scenes, including Mino Cinélu, Sarah Elizabeth Charles, Becca Stevens, Grace Kelly, Lakecia Benjamin, Deva Mahal, and Takuya Kuroda. He has released several records as a leader, including Day Dreamer (Ropeadope, 2015), his Herbie Hancock/Head Hunters tribute Vein Melter (Tru Thoughts, 2015) — jointly created with producer/multi-instrumentalist Sly5thAve — and most recently, the Cross Currents EP (self-released, 2019), featuring drummer Nate Smith and saxophonist Marcus Strickland. He is also a core member of the groundbreaking Brooklyn Afro-pop/jazz fusion collective Ajoyo and producer & engineer of their sophomore release, War Chant.

Fischer has brought his unique voice as a composer and bandleader to stages around the world. With over 700,000 plays on Spotify to date, his music has been featured on Spotify’s flagship editorial playlists like State of Jazz, Butter, and Fresh Finds, as well as taste-making radio shows including Gilles Peterson (BBC Radio 6), Jeremy Sole (KCRW), Miller Time with legendary bassist/producer Marcus Miller (Sirius/XM) and Wicked Jazz Sounds (Amsterdam).

Ever prolific and versatile, Fischer also has many years’ experience as a producer and songwriter in the indie-pop, soul, and singer-songwriter genres. Fischer’s credits as a producer, engineer, and songwriter include Morgan James, Laura Izibor, Elise Testone, Jasmine Cephas Jones, Samora Pinderhughes, Justin Brown, BIGYUKI, and many others. Jesse’s remixes for artists such as Emily King, Gregory Porter, Hiatus Kaiyote, Space Captain, and Takuya Kuroda have been spun on dancefloors and parties all across the globe, from Singapore to Amsterdam to South Africa to London. He is also a passionate educator with experience teaching music and music production to young people of all ages, in both a private and classroom setting.