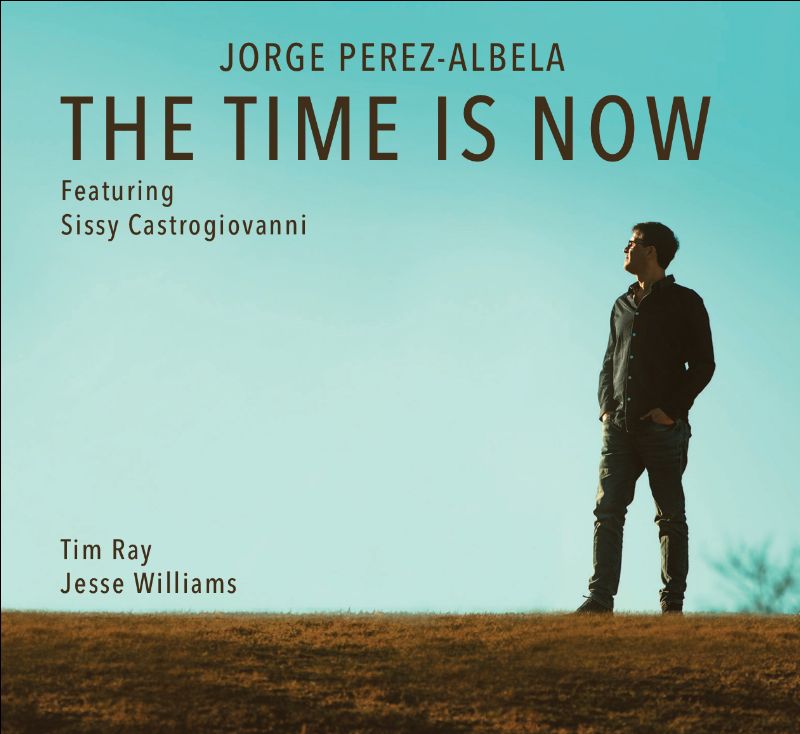 The ten tracks that make up The Time is Now reflect an array of musical traditions and are tied together by a jazz sensibility.  Inspired by the saying “Music unites us. Music connects us to truth”, Jorge spreads that message with music that sees no border and is rife with emotion.

The album begins with a track entitled “The Mirror”.  “This track is a journey from duality to communion, reflecting upon the idea that we’re trapped in a world of conflicting opposites.  We demonize the other and sanctify ourselves, without realizing, we’re all part of the same. The song invites us to connect from the heart, embracing our commonalities and seeking the best in one another,” said Perez-Albela, reflecting on the origins of the album.  The piece begins with the rhythmic musings of Pérez-Albela, ushering in Sissy Castrogiovanni’s fervent, passionate voice. Pianist Tim Ray improvises, demonstrating his stunning lyrical melodic invention.

“A Mis Padres” is a tribute to Jorge’s parents.  The lyric “I want to be the light in you” refers to the reflection of love between parents and children.  The lyrics honor Jorge’s parents legacy, their lifelong search for truth, growth and trust in one’s calling.  Beginning with a stripped down bass, cajon and vocals trio and expanding to a full-ensemble piece, the track demonstrates the group’s stellar dynamic sensibilities.  The track also features wonderful solos by pianist Tim Ray and bassist Jesse Williams and demonstrates the power behind Sissy Castrogiovanni’s impassioned vocals.

The repeated ostinato figure and fiery vocals from Sissy go far in creating the moody atmosphere of “El Reto”.  Jorge wrote “El Reto” during a particularly challenging portion of his life. Themes of isolation, despair, and hope intersect.  At the beginning, the lyrics evoke the fear of a challenge, perceived as insurmountable. But as the song progresses, lies hope and the conviction that everything passes. “Your belly announces the dawn” is a metaphor for rebirth.The chorus, a powerhouse of courage and hope, carries the message that we are not alone. When we trust the process and embrace others’ loving support, we can get through the toughest times.

“Hope (The Time Is Now)”, the album’s final track, encapsulates the energy of the full release.  The lyrics “Hear your heart, my heart, our hearts, the time is now” are an invitation to live in accordance with our wise inner selves.  The track is as much of an admission of hope as it is a call to action to never silence our inner voices; to live and to share your talents, passion and vision.