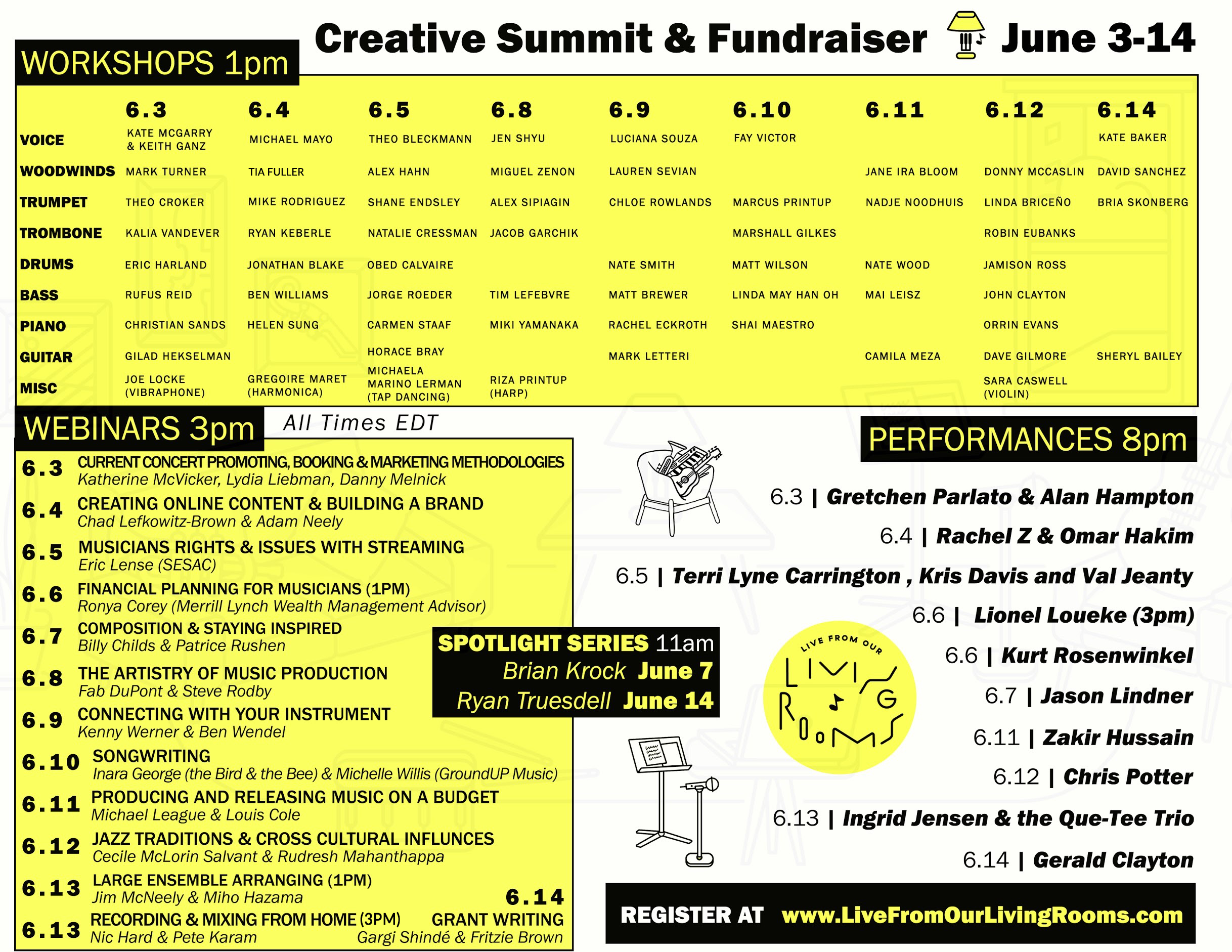 Live From Our Living Rooms Creative Summit and Fundraiser

Featuring workshops, webinars, and performances with over 100 jazz icons

Proceeds will provide emergency relief to US-based musicians whose freelance careers have been impacted by COVID-19.

The creative world is reeling in the wake of the COVID-19 pandemic, which has closed venues and cancelled work indefinitely for thousands of musicians. In an effort to help those financially impacted by the current crisis and to help foster communication in a time of isolation, Live From Our Living Rooms is returning with a Creative Summit & Fundraiser. Scheduled to run from June 3rd through June 14th, the Creative Summit & Fundraiser will include performances and daily workshops with master musicians, as well as webinars with industry professionals — within music and in other disciplines — designed to help musicians navigate this new environment.

Organized by musicians Sirintip, Thana Alexa and Owen Broder, Live From Our Living Rooms offers a platform for creative exchange, continuing to raise relief funds for musicians while providing paid performances and teaching opportunities for the music community at large. The inspiration to organize the Live From Our Living Rooms Creative Summit & Fundraiser grew from the success of their first Online Festival & Fundraiser, which concluded in April after raising nearly $60k from which performance grants were allocated to struggling NYC musicians. Referred to as “the first jazz festival for the quarantine era” by Rolling Stone, the April event featured live performances and masterclasses by a litany of top tier jazz artists such as Chick Corea, Christian McBride, Bill Frisell, Becca Stevens and more.

On June 7 and June 14th, the Project Spotlight Series will highlight some of the remarkable work being released during quarantine, featuring live-streamed conversations with project creators Brian Krock and Ryan Truesdale, respectively.

There is a $3 minimum donation required to attend each webinar and performance, which will stream on Crowdcast. The Zoom workshops range from $30-40, and will be capped at 20 participants per session to offer an exclusive experience with some of the biggest names in jazz & beyond. In a continued effort to support our community of musicians, participating artists have agreed to share a portion of their earned revenue with the Live From Our Living Rooms Fundraiser which will go towards the initiative’s next round of relief grants. Additional donations made from the initiative’s global audience will also be allocated toward relief grants. For this round, funds will be collected and distributed by fiscal agent, American Music Lab. The next grant application cycle will be announced after the completion of the Creative Summit.

More information can be found at www.livefromourlivingrooms.com.