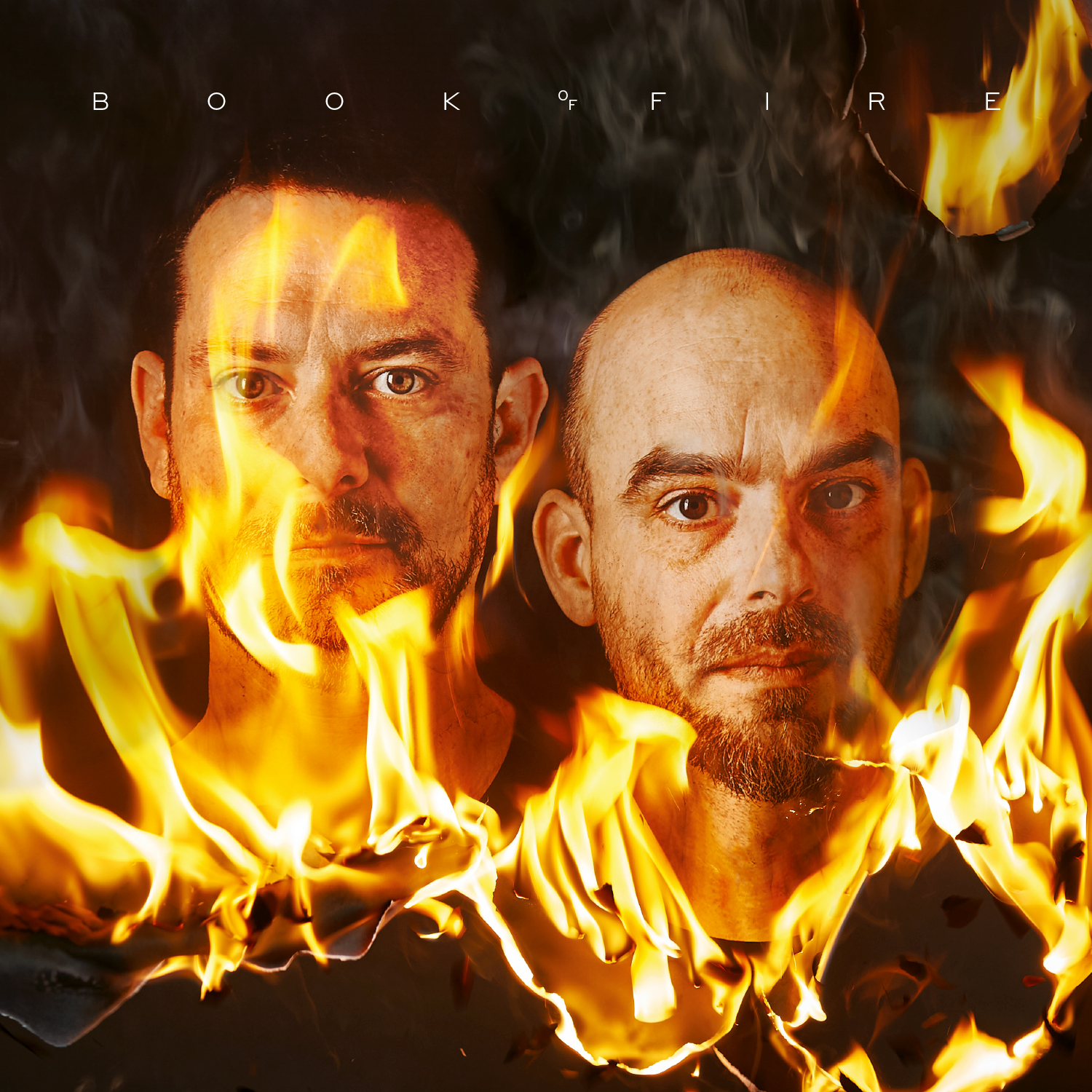 Book of Fire, Out January 31st

Guitarist and composer Eric Hofbauer is pleased to announce the January 31st release of his latest album Book of Fire on his Boston-based label Creative Nation Music.  This release is the second album in the artist’s Wu Xing (Five Agents) Series, Hofbauer’s musical depiction of every part of the ancient Chinese schematic of the Five Agents, or Five Elements.  Book of Fire is the gripping follow-up to Hofbauer’s June 2019 sextet album Book of Water.  Book of Fire, a stark contrast from Hofbauer’s last release, was conceived in a duo format with Anthony Leva on upright bass.  The duo’s acoustic performance is augmented by the addition of electronic instrumentation and the intertwined recordings of literary giant James Baldwin. The result is an intense amalgam of consonance and texture; tradition and innovation.

Integrating unlikely instrumentation on this release, Hofbauer plays not only his customary Guild archtop guitar but also drum machine and sampler (the Akai MPC1000) and in addition to upright bass, Leva is on turntables throughout this release.  Regarding his use of sampling and other electronics, Hofbauer notes “I’m certainly nowhere near a hip-hop producer, I don’t make beats that way, I don’t know how,” Hofbauer states. “Instead I got together with the drummers I work with frequently — Curt Newton, Dylan Jack and Austin McMahon — and I recorded them. I also recorded some of Tony’s bass notes and lines, myself on guitar and also some auxiliary percussion, put it all together into a sequence bank and started creating beats and sounds, chopping up four-bar phrases into other things in odd meters, mixing and matching and layering so basically every drum beat I came up with is like a ‘super-drummer’ comprised of the grooves and sounds of three of my favorite drummers.”

Hofbauer’s Wu Xing series will ultimately cover every part of the ancient Chinese schematic of the Five Agents, or Five Elements. We’ve now had water and fire; wood, metal and earth are still to come. Each one speaks to a particular social/political reality in need of “movement,” as Hofbauer puts it. Book of Water touched on the problem of climate change, and now Book of Fire arrives with sobering reflections on racial inequality.

The Book of Fire suite is made up of five chapters.  The title of the first chapter, “Courting Madness” refers to a James Baldwin passage from the novel Giovanni’s Room.  This acoustic blues acts as a vehicle for the use of a drum machine and improvisation by Hofbauer.  On the coalescence of his music and Baldwin’s speech, Hofbauer indicates “His sense of space, his mastery of the dramatic pause, his cadence and patterns are deeply musical,” Hofbauer observes. “It’s rhythmic, it’s got its own kind of groove and swing that fit perfectly with the music. It was serendipitous how perfectly his text fit with the beats and pulse and integrated immediately.”

The textural musings of “Pray for Rain” are adorned with James Baldwin’s playful literary-musical analysis of Bessie Smith.  This track sees the improvisation on a written theme coinciding with Hofbauer’s use of an echo effect allowing him to produce otherworldly sounds from his instrument.  In fact, Book of Fire is Hofbauer’s first recording to date that features him using any guitar effects at all.  The artist uses them strategically and sparingly, but with forceful, dramatic results. “History is the Present” is a purely instrumental exploration; a duet between turntables and acoustic guitar.  Hofbauer creates layers of blues-fueled texture on “Something Gives”, an impassioned combination of slide guitar and a fuzz-distortion tone.  Seemingly the climax of the release, this fiery track spirals into entropy alongside the bold and beautiful words of James Baldwin and Bobby Seale.

The final chapter of Book of Fire, “Terrible and Beautiful,” emerges “out of the ashes and the smoke,” Hofbauer says, after Chapter Four’s enormous energy release.  Here is where “things start to rebuild and reform,” he continues, “with a new positive but mindful way to move forward.”  Baldwin’s words in Chapter 5 are from a prepared speech he delivered to young people, imparting wisdom about “the terrible storm that is life, terrible and beautiful, but you must know that it is both.” Hofbauer notes that fire, too, is terrible and beautiful, and so for that matter is water.  Book of Fire, Hofbauer and Leva’s sonic exploration and foray into the realm of electronic instrumentation, can be described as a meditation on the state of racial inequality in our country, a catalyst for dialogue, for posing questions.

​Hofbauer has been an integral member of Boston’s jazz scene as a musician, bandleader, organizer and educator for the past twenty five years. He has performed and recorded alongside such notable collaborators as Han Bennink, Roy Campbell, Jr., John Tchicai, Garrison Fewell, Cecil McBee, George Garzone, Sean Jones, John Fedchock, Steve Swell and Matt Wilson.

Hofbauer, recognized in the 2019 and 2017 DownBeat Critics’ Poll for Rising Star – Guitar, is perhaps best known for his solo guitar work featured in a trilogy of solo guitar recordings (American Vanity, American Fear and American Grace). Of the trilogy, Andrew Gilbert of The Boston Globe writes, “No other guitarist in jazz has developed a solo approach as rigorous, evocative, and thoughtful as Hofbauer. His 2016 solo release Ghost Frets, was described by Chris Haines of The Free Jazz Collective “as a real testament to Hofbauer’s musical style and vision…The playing is virtuosic throughout providing a real master class in creative solo performance.”

Hofbauer has earned critical acclaim for his work in a variety of musical projects, including recordings with the Garrison Fewell’s Variable Density Orchestra, The Pablo Ablanedo Octet(o), Charlie Kohlhase’s Explorer’s Club, and The Blueprint Project with Han Bennink among others. Hofbauer’s three recent collaborative projects, The Hofbauer/Dylan Jack Duo (guitar and drums duet performing a distinctive genre-crossing repertoire of covers), Pocket Aces (a “consciously compositional” improvising trio) and the Hofbauer/Rosenthal Quartet (a modern post bop outfit focused on original composition) had debut releases in 2018/19.

​Hofbauer received a Master’s degree from New England Conservatory and a Bachelor’s degree from Oberlin Conservatory. Hofbauer is the chair of the Jazz and Contemporary Music Dept. at Longy School of Music of Bard College where he teaches jazz theory, artist portfolio, chamber ensembles, solo repertoire class, and guitar lessons. For over 20 years he has taught jazz history at Emerson College. Hofbauer has also been visiting professor at Wellesley College, and faculty at Clark University and the University of Rhode Island. In 2009, he was honored with the Massachusetts Cultural Council Artist Fellowship in Music Composition.