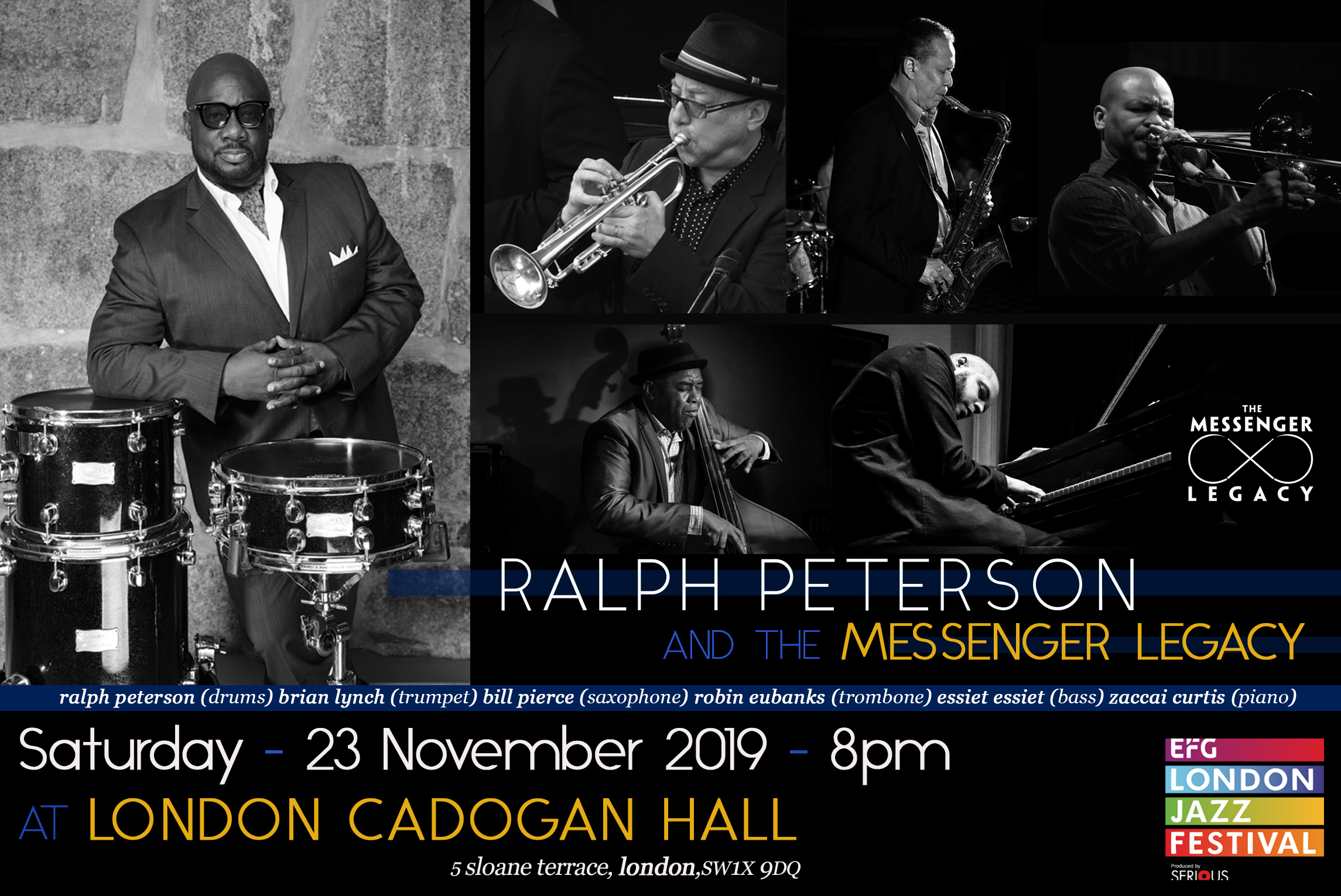 35 years ago, Peterson was a 21 year-old emerging musician chosen to play by Blakey in the 1983 version of The Jazz Messengers’ two-drummer big band. Having learned first hand from the man himself, Peterson remained the second drummer in the big band until Blakey’s passing. This group of musicians wishes to preserve, protect and honor the legacy of an artist who was much more than a bandleader to them all.

Peterson has tirelessly commemorated Art Blakey’s centennial throughout this entire year – he has brought together this group of jazz elite, featuring fellow Jazz Messenger alumni, to record and release Messenger Legacy: Alive, as well as embark upon a year-long international tour, which included performances at The Kennedy Center, DC and Newport Jazz Festival. When it comes to Art Blakey, there is simply no living drummer more suited to honoring his legacy than the incomparable Ralph Peterson.

Messenger Legacy: Alive was the third release from Ralph and his label, Onyx Productions in one mere year – he recently announced yet another release, Listen Up! with his Gen-Next Big Band (featuring Berklee students), due out November 12th!

Vanessa Rubin is revered as one of the greatest jazz vocalists in the world today. She possesses a voice hailed for crystalline clarity, hearth-like warmth and sass. She brings a wealth of diverse influences to her singing style from both the Trinidadian/Caribbean roots of her mother and traditional jazz by way of her Louisiana-born father. This

appearance at London Jazz Fest follows the release of The Dream Is You: Vanessa Rubin Sings Tadd Dameron, earlier this year. Rubin’s first solo project in years shines a light on one of the most important, influential and arguably understated voices in jazz history – Tadd Dameron.

As a Cleveland native she was strongly influenced by Nancy Wilson. Other sources of inspiration include late great trumpeter Blue Mitchell, and the legendary vocal trio Lambert Hendricks and Ross, as well as her love of the Motown Sound. Once she made the inevitable move to New York she was discovered and mentored by many great veterans like Barry Harris and Pharaoh Sanders.

In 1992, Rubin signed to Novus/RCA Records and recorded five albums, three of which reached #1 in radio charts. Her all-star sextet included jazz legends Frank Foster and Cecil Bridgewater and she worked closely with such jazz luminaries as Kenny Burrell and Grover Washington Jr.

Red Alert is pianist Janette Mason’s explosive jazz trio and a platform for her unique contemporary compositions. Her music has been described as being similar to E.S.T. and The Bad Plus, bringing together the dynamic rhythm

section of Chris Morris and Tom Mason for this performance of cutting-edge jazz. The trio play contemporary jazz with cool grooves, interesting time scapes, funky synths and a cinematic texture. They have recorded two successful albums, including the Parliamentary Jazz Award nominated Alien Left Hand. The intuitive style and musical expertise of

Tom Mason (bass) and Chris Morris (drums) complement Janette’s unique improvisational approach perfectly to create innovative, energetic and engaging live performances. They are celebrating the vinyl release of their critically acclaimed 2018 CD, Red Alert, on Dot Time Records. Janette is known as an outstanding arranger – alongside her contemporary jazz compositions, the trio take on arrangements of pop classics such as ‘Cars’ by Gary Numan and ‘Ashes to Ashes’ by David Bowie.