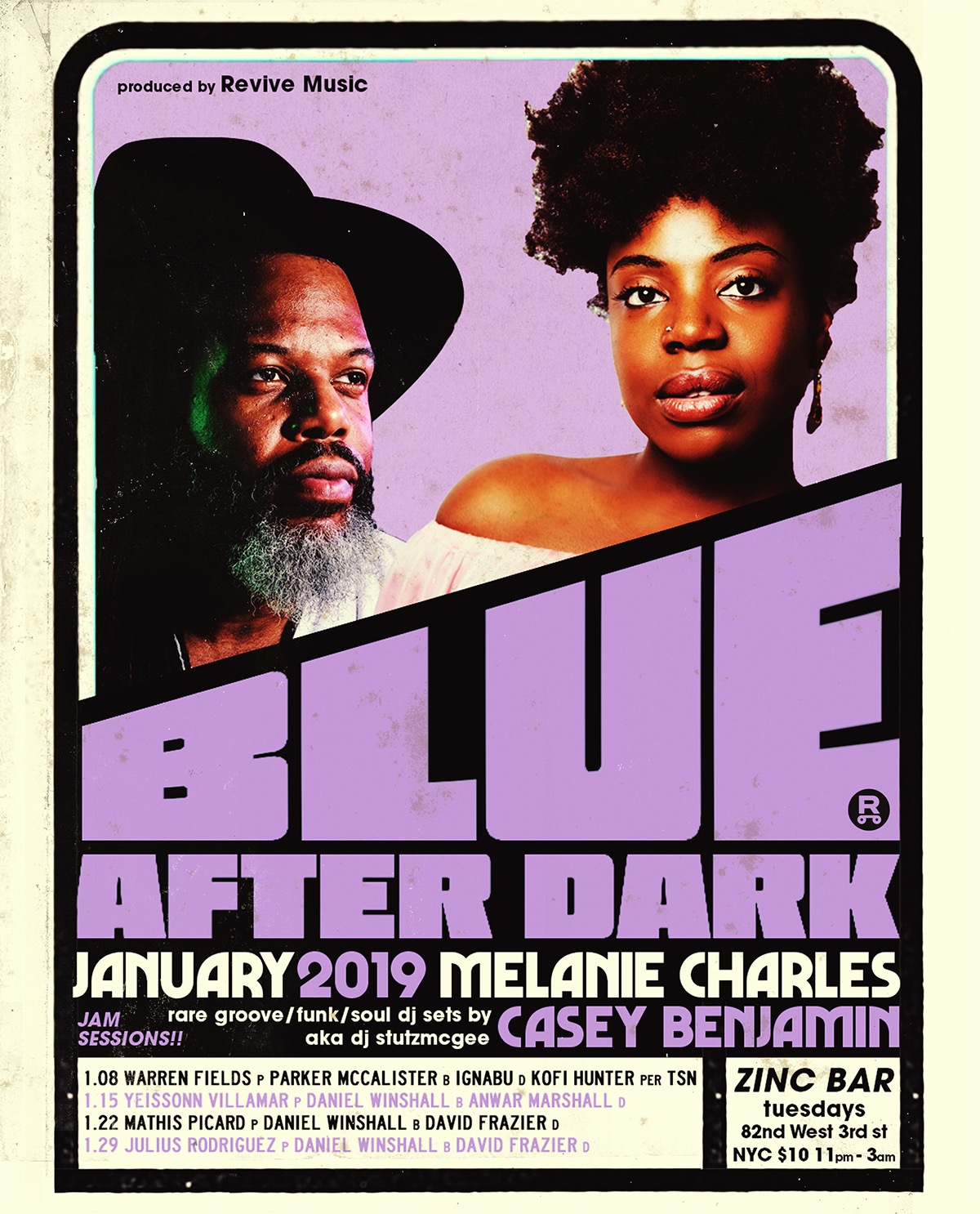 Revive Music is thrilled to launch the next installment of their renowned jam session/jazz party Blue After Dark, with new host Melanie Charles. Alongside Charles, resident DJ and GRAMMY Award-Winning artist, Casey Benjamin aka DJ Stutzmcgee will spin rare funk & jazz/ future soul all night long. Frequented by popular musicians from all over the world including members of The Roots, Q-Tip, Thundercat, Robert Glasper, Anderson .Paak, Kamasi Washington, Chris Dave and the late Roy Hargrove, to name a few, Blue After Dark promises not only an evening of unheard and experimental jams, but a place of community and culture. The popular weekly session will kick off on Tuesday, January 8th at Greenwich Village’s celebrated jazz club/lounge Zinc Bar, located at 82 West 3rd St. New York, from 11pm-3am. Cover: $10-$15.

This season, acclaimed vocalist and flautist Melanie Charles brings a fresh new vibe to the night. Taking on the role of host, Charles is “a perfect fit, both musically and energetically”, for the session, exudes Revive Music founder Meghan Stabile. “The night has taken on a whole new appeal. It’s still a jam session but it’s also so much more.” Established in the world of jazz/analog lofi/ and R&B, Charles’ creative fluidity spans jazz, soul, experimental, and her own Haitian roots. As it is now, it’s rare to catch a female-led jazz session – Blue After Dark is the perfect place to start. A series of subterranean sets, Blue After Dark has become the prime spot to hear the newest music from NYC’s most prolific jazz musicians and creative minds within the jazz/beat culture scene. It’s the spot to hear and be heard. Welcoming some of the greatest musicians of our generation, Blue After Dark – now celebrating its 10th year – is where you’ll hear the sounds of the scene and the story of Revive Music.

Excited for the re-launch, Meghan Stabile is truly dedicated to the legacy of this groundbreaking series which traces its roots to hip-hop’s jazz lineage. Initially founded by trumpeter Igmar Thomas, the jam first began as The Evolution Jam Session at Creole in Harlem. Rapidly growing in popularity, the session needed a larger space and so, found its new home at Zinc Bar in the fall of 2011. At Zinc, the assemblage of young trailblazers alongside accomplished jazz artists, collectively take a piece of Harlem to the Village.