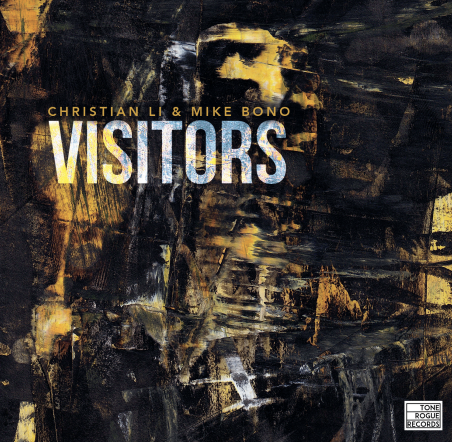 Pianist Christian Li and guitarist Mike Bono have worked together in various capacities for almost a decade, making the release of an album co-led by the NYC-based duo a natural next step. A set of originals split between them, Visitors is thus both a celebration of the past and a harbinger of a presumably shared future. Helping Li and Bono realize their vision are violinist Alex Hargreaves, tenor saxophonist Dayna Stephens, upright bassist Jared Henderson, and drummer Lee Fish (Jimmy Macbride subs on two tracks). It’s worth noting that Hargreaves and Stephens appear separately on two and three, respectively, of the nine tracks, a detail of some ultimate significance to the impression left by the release.

The co-leaders’ compositions are marked by distinct personality and give the players ample material with which to operate. Though the tracks aren’t improvisations in the pure sense, there’s certainly much room for individual expression and soloing, and the performances exude the high energy of a live performance. Bono’s “Puddles” opens the album with an authoritative performance by the band, Stephens on hand and Fish powering the tune aggressively. A languorous intro precedes the full band’s playing, however, with fluid, finger-style patterns by the guitarist offering a warm base for the saxophonist’s musings. “Puddles” proves to be one of the album’s most enticing tunes melodically in the way the composition develops that opening episode into a performance that breezily segues between early morning splendour and wide-eyed euphoria. As happens elsewhere on the recording, the leaders cede the primary soloing spot to their guest, Stephens in this instance taking full advantage of the opportunity to establish himself, even if Bono follows his turn with a mellifluous one of his own. The rousing title track and “Awake” are also elevated by the saxophonist’s singing expressions and the ever-propulsive swing of the Fish-and-Henderson pairing.

Li’s “Little Rascals” switches up the ensemble sound by featuring violin in place of sax. The pianist takes the first solo, a wild, keyboard-spanning exploration that’s shadowed by the others’ equally aggressive accompaniment, until Hargreaves steps forth, the band again following his lead with a texturally focused backing before a frenetic restatement of the opening theme. The violinist blends with Bono seamlessly in the warm unison statements that open the guitarist’s “Tango,” an alluring eight-minute showcase for the ensemble’s melodious side; the track also serves as a good representation of his style, which eschews distortion and extreme volume for a style marked by euphony. A dramatically different Li-Bono band emerges in the pianist’s “Space Invaders” when Li embellishes the rapid-shifting sound design with synthesizer textures, while the swoon-inducing ballad “Moon Over New Kent” grants the listener a better opportunity to appreciate the co-leaders’ talents as improvisers when Hargreaves and Stephens sit out.

Throughout Visitors, musicianship is at a high level, and the writing and performances impress, too. If anything weakens the set, though, it’s uniformity. Hargreaves and Stephens are such dominant presences, the ensemble feels like distinct units when they respectively appear; further to that, on the tracks where they don’t play, the ensemble assumes a different character again. Had Hargreaves and Stephens played on the same tracks and perhaps throughout the album, a more cohesive set would have resulted; alternately, the co-leaders could have omitted them and fashioned Visitors as a quartet recording, though it wouldn’t have benefited from their considerable gifts as a result. As weaknesses go, however, it’s a rather small one that certainly doesn’t argue against the calibre of the performances on a track-by-track basis.