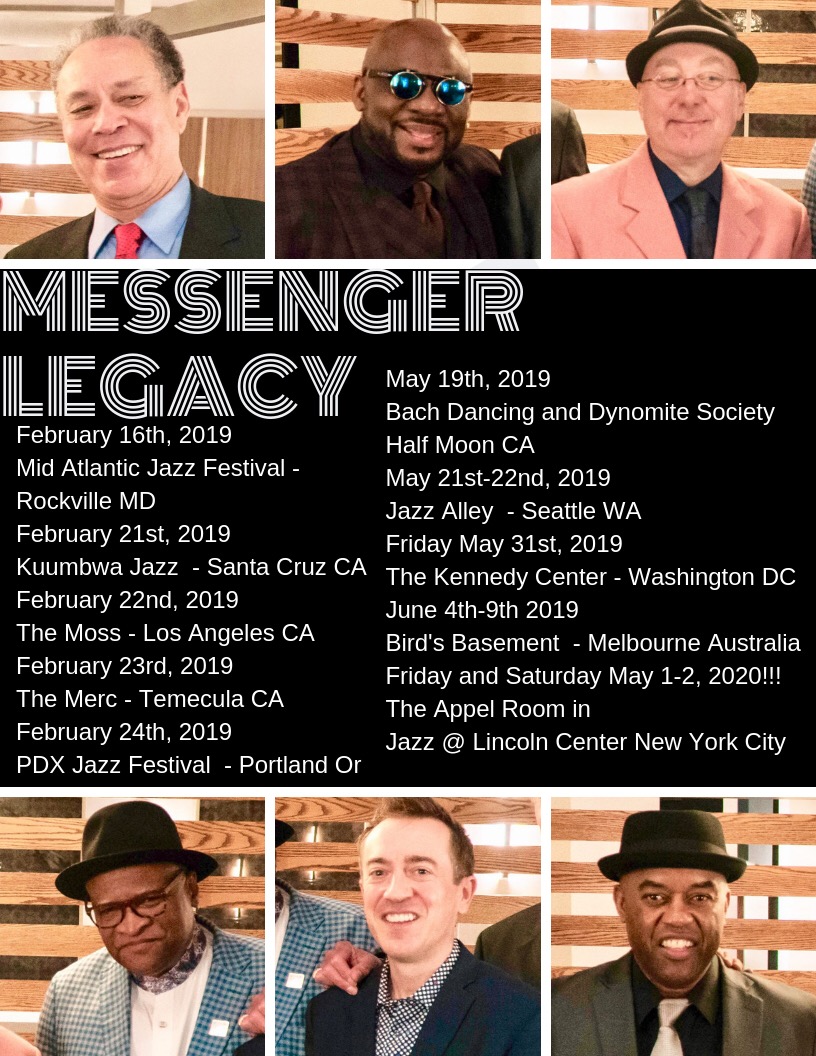 Following the successful double release of I Remember Bu: Alive Vol. 4 from The Gen-Next Big Band and Inward Venture from Aggregate Prime, iconic drummer, bandleader and Berklee professor Ralph Peterson Jr. is now thrilled to continue his restless touring schedule with the Messenger Legacy ensemble. Due to release a new album in May 2019 on Peterson’s Onyx Productions, The Messenger Legacy band, featuring Bobby Watson, Essiet Essiet, Geoff Keezer, Brian Lynch and Bill Pierce, have announced dates from the beginning of 2019 through 2020! The elite line-up of Jazz Messenger alumni will perform in Maryland, California, Oregon, Washington, DC, New York City, Australia and China.

This upcoming new album is the final piece of the Onyx Productions trilogy which paid homage to and coincided with Art Blakey’s 99th and centennial birthdays. As the last drummer chosen by Blakey to play by his side in the Jazz Messengers, Peterson has a unique responsibility to carry on the Messenger torch and tradition. The current Messenger Legacy configuration has deep roots: Bill Pierce and Bobby Watson were members of the Jazz Messengers when Peterson first sat in with the group and the final Jazz Messengers arrangement featured Peterson with Essiet Essiet, Geoff Keezer and Brian Lynch. Commemorating Art Blakey’s 99th birthday, the Messenger Legacy Band performed at Scullers Jazz Club on this past October 11th.  The band continued the celebrations with performances through the next two nights at the Side Door in Old Lyme Connecticut. This performance was recorded and will now be heard for the very time on this new Spring album, which will coincide with a special performance at the Kennedy Center on May 31st.

With this exciting new 2019 release, Peterson continues to showcase his eclectic, wide-ranging musical palette as well as the power of his personal perseverance after beating cancer twice. On his past two releases, Bill Milkowski at Downbeat noted, “both big band and quintet recordings represent different aspects of Peterson’s voracious musical appetite.”

After making their professional debut at Scullers in Boston in late 2017, the Peterson-led Gen-Next Big Band released their debut recording I Remember Bu: Alive Vol. 4 at Scullers, featuring fellow Art Blakey alum Donald Harrison on October 4th, 2018. Following in the Jazz Messenger tradition of mentorship, the Gen-Next Big Band features an exciting lineup of some of Berklee College of Music’s brightest young musicians and employs Blakey’s signature two-drummer format. George Kanzler at New York City Jazz Record made an apropo summary of this recording when he wrote: “It all makes for an exciting, exhilarating and exhaustively entertaining big band workout.” Wasting no time, The GenNext Big Band will return to the studio over the last weekend in November 2018 to record a second album at Avatar Studios. This project will feature Mingus Big Band trombonist Frank Lacy as a very special guest soloist.

Onyx Productions’ second release of 2018 was Inward Venture: Alive Vol. 5 at the Side Door, released on October 17th with Peterson’s seminal group Aggregate Prime. This quintet features a who’s-who of modern jazz masters including Gary Thomas on tenor saxophone and flute, Mark Whitfield on guitar, Davis Whitfield on piano, Curtis Lundy on bass and Peterson on drums. A follow up to the group’s 2016 debut Dream Deferred, Inward Venture was recorded at the Side Door in Old Lyme, Connecticut and showcases the exciting group at their most adventurous. “I am very excited about the progress of this band and this recording shows the immense potential and kinetic energy,” says Peterson. Amongst reviews from New York City Jazz Record and Midwest Record, Nate Chinen at WBGO wrote, “the album — Inward Venture: Alive Vol. 5 at the Side Door (Onyx Music) — has all of the brash kinetic energy you’d expect from such an assemblage.”

Both of these releases received two fantastic features from Downbeat and Jazziz. Check them out!

Peterson is also grateful and proud of the manner in which he has prevailed over physical and personal difficulties. He has lived his life “drink and drug-free” for more then 22 years now. He has survived colon cancer and Bell’s Palsy in addition to multiple orthopedic challenges.

In 2010, Peterson founded Onyx Productions Music Label and has released his own music on the label ever since.