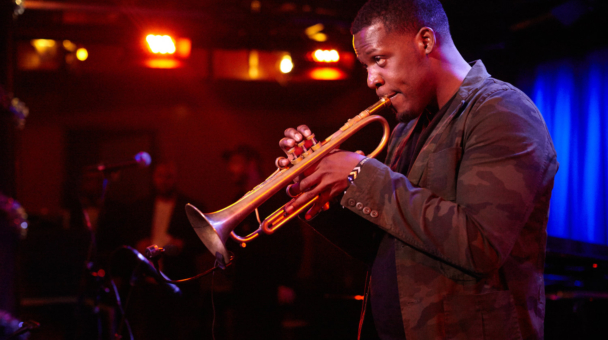 Hosted by venerable jazz critic Ted Panken, the Desert Island Discs series in an incredibly popular program that is now entering its fifth season. It’s modeled on an iconic BBC radio show, extant since 1942, which invites eminences from various walks of life to choose—and discuss—the eight records they would bring for a stay on the apocryphal desert island. For the Jazz Museum’s expanded version, the presenters are jazz musicians, who will present a cohort of music, of any genre, that was essential in the formation and evolution of their musical personality.

The season 5 kick off will feature the renowned trumpeter Keyon Harrold, who hails from Ferguson, Missouri. Keyon will play and discuss the music that he would want to have should he wind up on the proverbial desert island. With so much to choose from in the way of raw materials, it’s bound to be a fascinating trip.

On his well-received autobiographical 2017 CD, The Mugician, trumpeter Keyon Harrold balanced the cultures of hip-hop, R&B and hardcore jazz in idiomatic equipoise. The success of this endeavor came as no surprise to Harrold’s sizable fan base, which expanded when he channeled the sound of Miles Davis in Don Cheadle’s 2015 biopic, Miles Ahead. By that time, Harrold boasted consequential, well-documented tenures as a performer, arranger, beatmaker, and producer with such high Q-score artists like Common, Maxwell, Andre Crouch, Talib Kweli, Mos Def, 50 Cent, Jay-Z and Eminem, and multiple tours of duty with the Count Basie Orchestra and Cirque De Soleil. In 2008, he made a strong hardcore jazz date for Criss Cross that showcased his gifts as an erudite improviser with abundant chops, fluently amalgamating dialects associated with such trumpet influences as Fats Navarro, Freddie Hubbard, Clifford Brown, Woody Shaw, and Miles Davis (to cite a short list) into a conception identifiably his.

More information can be found at JazzMuseuminHarlem.org.