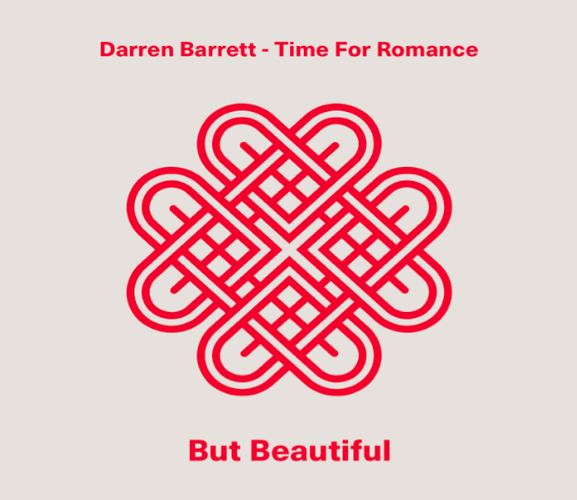 Younger Arts Fuse readers probably don’t know about the Jackie Gleason-Bobby Hackett collaborations from the late 1950’s-early ’60s. Gleason was a comedian-television star with a musical bent and the money to hire musicians and studio time. He produced a series of what were essentially easy-listening/seduction records, with titles like Songs For Lovers Only and Easy Listening Ballads. Gleason used new stereo techniques, very good classical and jazz studio musicians, and placed Bobby Hackett at the center of the sessions. Hackett was a wonderful cornet player, with a gift for melodic improvisation and a beautiful sound. He simplified his style and was the perfect soloist for these confections. It might seem far-fetched, but if Gleason was around today, he might produce a record that sounded a lot like Time for Romance: But Beautiful.

Darren Barrett, the trumpet player-producer at the center of Time For Romance, plays very much the way Hackett did on those recordings: sticking to the melody with little embellishment. In fact, Barrett generally sticks closer to the melody than the cornet-playing Hackett did, although he does cut loose with a full bore boppish improv in one tune.

This recording utilizes electronics that were not available in Gleason’s era, but the electronics-synthesizer are often used here in ways that are similar to the treatment of the string sections and organs on Gleason’s records. The alteration of Barrett’s trumpet sound by way of electronics was obviously something that couldn’t have been done in the ’50s. But, if it had been available, I believe it would have been used to create a similar mood to what it is asked to do here.

The major point of departure from Gleason on this album is rhythmic. His tracks never moved out of the ballad realm, while Barrett’s recording features the occasional presence of an extended rhythm section that moves into various Latin claves.

The other musicians on Time for Romance: But Beautiful all perform well. They are: Takeru Saito on piano, Youngchae Jeong on bass and Daniel Moreno on drums, with contributions by keyboardist and synthesist Santiago Bosch, percussionist Judy Barrett, and guitarist Kurt Rosenwinkel.

Rosenwinkel starts off the Dizzy Gillespie tune “Con Alma” with a fine extended guitar solo. Latin rhythm section kicks in and Barrett states the melody. The synth provides sounds that sometimes accent, sometimes deflect, and sometimes underscore, the track. Barrett very slightly elaborates the melody, but once the song gains momentum his delivery is straightforward and doesn’t break in mood.

The Bronislau Kaper song “Invitation“ is taken at a very slow tempo. Barrett’s sound is breathy here, as it is throughout, moving toward a fluegelhorn sound on the trumpet. There’s a heavier dose of synth here, ranging from the smooth to the sawtooth-y. This track definitely evoked the Gleason-Hackett efforts to me.

“The Touch of Your Lips,” written by Ray Noble, is given a funky, wah-wah edge in the opening, then moves to a medium-up Latin feel. Second time through, the synth is more persistent, mixing in a variety of sounds in different ranges. The piano solos simply; again pretty much just stating the melody. Next chorus there is a vocal singing the tune, which I think is being run through a ring modulator on a light setting. It’s a little bit of a surprise, but not off-putting and consistent with the mood.

Thelonius Monk’s “Ugly Beauty” is slow and atmospheric. Barrett plays simply and it works effectively with the rhythm section accompaniment. Synth comes in and out, with sounds reminiscent of Pat Metheny playing synth-guitar. The last time through, the melody is played by something that sounds very close to a synthesizer, but I believe it is the trumpet, run through some combination of electronic filtering.

Horace Silver’s “Nica’s Dream” is given a Latin beat, slightly slower than the way one usually hears the tune. Trumpet is joined briefly in unison by a raspy synth. Performed without much embellishment.

“But Beautiful,” the Rodgers and Hart standard, has a brief intro featuring a chorus of altered synthesized voices. It then goes into a ballad tempo. Barrett plays it straight, with some bending of notes. The piano and organ background puts this particular tune, again, pretty squarely in the Gleason-Hackett mold. The piano solo states the melody with almost no alteration and the final statement is, as on “Ugly Beauty,” a trumpet run through electronics to make it sound synth-like.

“Everything Happens to Me” by Adair and Dennis proffers busy electronics that surround the trumpet’s clear statement of the melody. The electronics grow sparser and Barrett supplies his only real jazz improvisation on the album. It’s an active, proficient solo, only 8 bars long, cut in the bop mold. Trumpet takes it out with a repeating tag ending.

A collage, made up of voices in reverb and other spoken words and sounds,  starts the next track, Cole Porter’s “Everytime We Say Goodbye.” The liner notes explain: “Barrett utilized organic sounds (taken from the city and from nature)” for this track, but the effect is not “concrete” or natural — it’s electronic. Trumpet emerges from this collage, stating this beautiful tune’s melody. The trumpet is “shadowed” by some synth washes and sustained notes. Piano provides the melody, with intermittent electronics in the background, very much in string-section style. Then, we have the second vocal on the album — Barrett sings the tune, with a vocorder modifying his voice.

This recording is thoughtful, but it’s not meant to be challenging. You have to read between the lines if you are searching for virtuosity. What once might have been called ‘easy listening’ music might be called “chill” today. It may qualify — if I can even use the term now — as seduction music. Let’s say mutual seduction. You can’t snap your LP on the turntable as you once did to hear Gleason’s showcases for Hackett, but you can program your device to run through Darren Barrett’s Time for Romance: But Beautiful. The results could be very much the same.