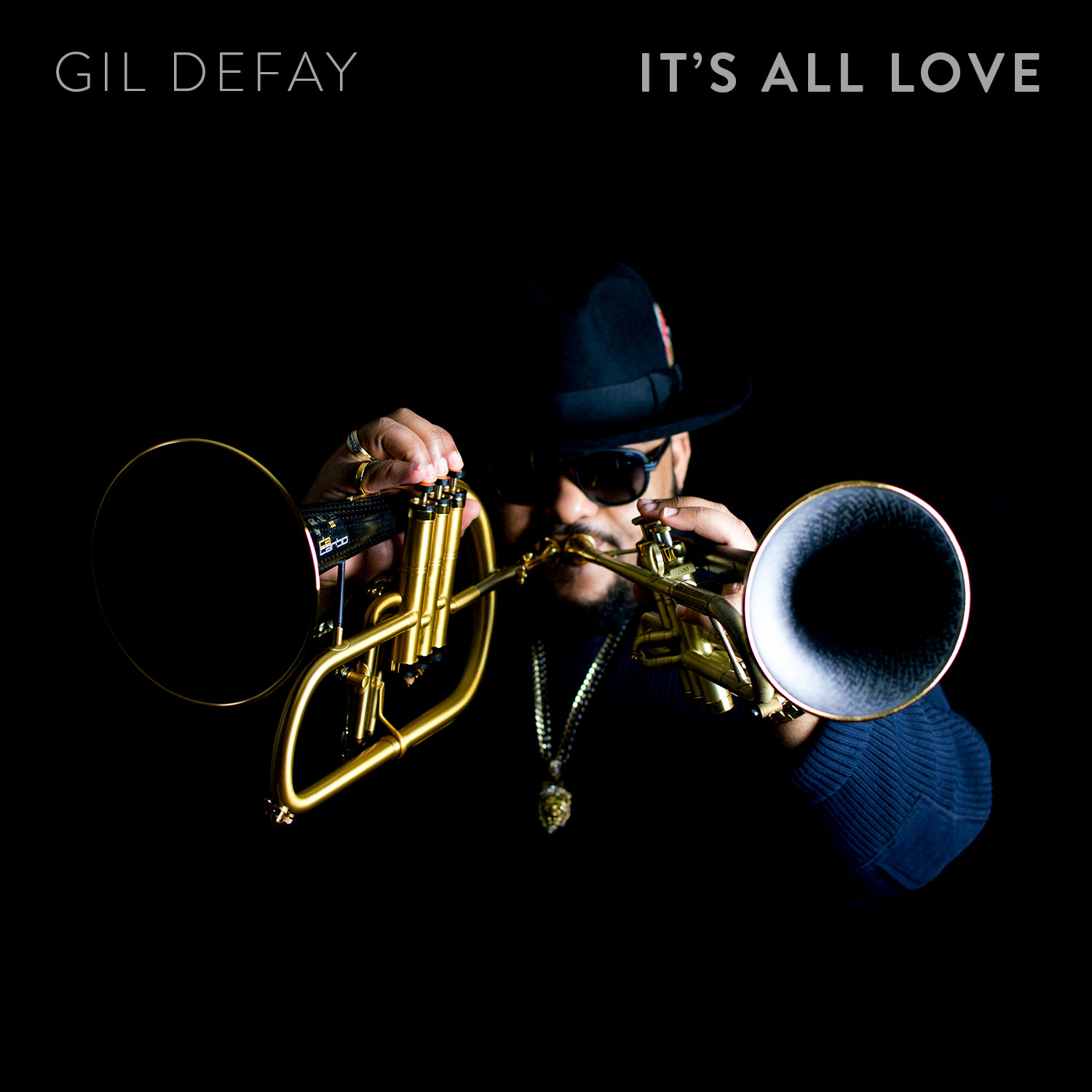 Trumpeter, composer and arranger Gil Defay is proud to announce the November 1st release of his new album It’s All Love. On this, his debut recording, Gil brings together a whole host of talented musicians including, Ansy Defay on tenor/soprano saxophones and vocals,  Rakiem Walker on alto saxophone, Toku Jazz on flugelhorn, Antonio Peñalva on guitar, Joel Desroches on keyboards, Matthew Smythe on organ/wurlitzer, Parker McAllister and  Michael Tiny Lindsey on bass, Ben Nicolas on drums, Bendji Allonce on percussion, and  Patrick Pelissier on vocoder. Having developed himself into an in-demand sideman on the  New York City scene, Defay is now proud to mark his arrival as a leader with It’s All Love – an exciting new project that aims to encourage the reflection upon and expression of positivity, gratitude and joy. It’s worth noting that for his New York fans, Gil holds a residency at Harlem’s iconic Red Rooster on Monday nights at 8pm.

“I want the listener to bop their head, tap their feet, get up and dance, reflect on all of the good that there is in life and know that it is important to put out good vibes and express love, peace, joy and happiness in who you are and in what you do.”

While studying at Long Island University, Defay became fascinated by the work of  Herbie Hancock. Particularly inspired by Hancock’s tune “Chan’s Song”, featured in the Dexter Gordon starred film ‘Round Midnight’, the trumpeter began to work on composing his own original melody, reflective of the famed piece and more. The end result, “You’re So Good” is presented here as a composition that draws further influences from the church, Bill Withers, Grover Washington, the Afro Caribbean and of course Hancock. Amongst other stand out  tracks from the album is “D. Bros Blues”, which reflects upon the close musical relationship that has developed between Gil and his brother Ansy. Ansy who is four years Gil’s senior alongside their father Pastor Georges F. Defay can certainly take credit for introducing Gil to a melting pot of musical heroes including Al Hirt, Stan Getz, Bob Marley, George Benson, Caribbean Sextet, Tabou Combo, Magnum Band, Shleu Shleu, Tropicana, Sting, Charlie Parker, Dizzy Gillespie, Miles Davis, Cannonball and  Nat Adderley, John Coltrane, Wayne Shorter, Freddie Hubbard, Branford and Wynton Marsalis, Kenny Garrett, Grover Washington Jr., Marcus Miller and many more.

Upon Ansy’s return from college in Oklahoma, the brothers reunited and studied together at LIU (Brooklyn). Upon Ansy’s second relocation, although always grateful for his brother’s support and influence, Gil began to realize his own independence away from his brother. The trumpeter stepped up his practice routine and strived to hone his own craft. Although still collaborating with his brother intermittently, one night Gil dreamt that he and his brother reunited again to co-lead a band at a premier music festival. The melody now heard on  “D. Bros Blues” is what the bandleader immediately recorded on his phone’s voice notes upon waking up and is now realized in this recording. In “On That NYC” Gil presents a sonic landscape that is an amalgamation of influences combining classic Hip Hop NYC duo group Mobb Deep records, De La Soul’s “Stake’s Is High”,  Branford Marsalis/Terence Blanchard’s  “Say Hey” – featured in Spike Lee’s Mo Better Blues Soundtrack –  and Freddie Hubbard’s “On The Que-Tee”. “What makes that interesting is that the influences were evident to me after the composition had been recorded. I’ve learned that our influences will always come out in our expressions”, explains Defay.

It’s All Love presents a wide-spanning showcase of Defay’s accumulated influences over recent years. From spiritual encounters to joyous festivals and celebrations to a reflective  New York state of mind, Defay has come to recognize the humility he has personally developed upon reflecting on his own life and experiences. “I see that I’m living, being of service to the people with my customized  God-given talents and gifts. To the listener…To all the people, It’s All Love.”