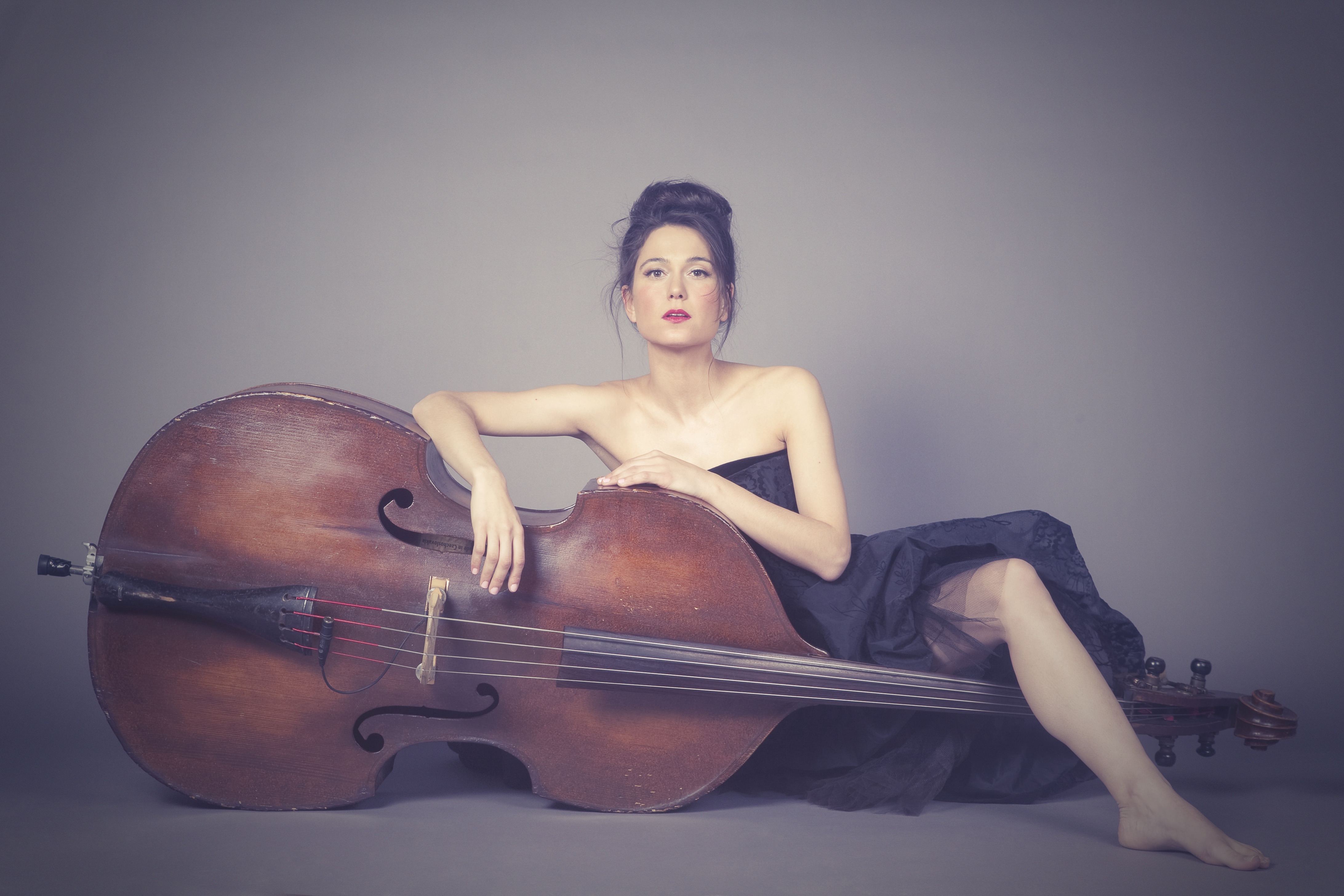 “My concept changes every few months,” says New York jazzer Brandi Disterheft on how she gets her big upright sound. “Sometimes I’m craving gut strings, other times low-action metal strings with a growly sustain. Sometimes the music calls for a hard-hitting aggressive attack, and other times, the opposite.” She brings the same varied approach to her recordings as well, most recently Blue Canvas, Brandi’s fourth solo release in eight years. The album mixes obscure standards and creative originals, uptempo swing and moody ballads, instrumental improvs and lyrical vocals that highlight Brandi’s smoky, ethereal voice.

The North Vancouver native found her musical footing early in life, soaking up the jazz keyboards played by her mother and observing the necessary disciplines that go along with the craft. Brandi followed suit and studied piano at the Royal Conservatory at age five, eventually switching to upright at 13 and later receiving a B.A. in jazz performance from Toronto’s Humber College. Pursuing classical bass, as well, she was hired for Canada’s Pops Orchestra when she was just 18. In 2000 she made the biggest move of her young career when she relocated to New York to study with jazz legend Ron Carter. She never looked back.

What was your goal with Blue Canvas, and how did you want it to differ from your three prior solo albums?
I knew I wanted to make a trio album, as my previous albums had showcased larger bands. My goal was to showcase the bass first and foremost, and complete the trio with the great Harold Mabern and drummer Joe Farnsworth, who have been playing together for 25 years. I chose songs that would work best for this trio. I knew I wanted to include a few Bobby Timmons and Phineas Newborn hits, and quickly a collective was formed of obscure standards we all enjoyed playing. I also had a writing spree and composed 40 tunes in three months, whereas the year prior I seemed to suffer from writer’s block. Part of the block, I found, was when I would put parameters on what was naturally expelling out of my subconscious. Now, I write down anything that comes to me with no inner criticism, and fine-tune after the fact.

Tell me about the musical influence your mother has had on you.
My mother, a B3 organist and jazz pianist from Chicago, went on the road in the ’60s opening up for acts including the Supremes and Antonio Carlos Jobim. She has romantic stories of her early years in Las Vegas: intimate cabaret rooms with pink flamingo wallpaper, carrying her wig bags and wearing sequin dresses, exchanging chord voicing ideas with Jobim before soundcheck. Playing upright bass in my mother’s trio as a teenager, I learned how to navigate through chord changes quickly by ear, subsequently learning many songs from the American songbook early on. I witnessed her dedication transcribing the great jazz pianists, including Bill Evans and Wynton Kelly, relentlessly for hours and hours on a daily basis.

You eventually moved to New York and studied with Ron Carter.
I wanted to study with him; many of my favorite bassists I had met over the years advised me how Mr. Carter was also revered as a serious teacher, known for getting rid of the “iron fist.” Having grown up playing road hockey with my brother, I felt I had to hit the bass as hard as I could to produce a powerful thump, or perhaps to prove to the boys I was a serious player. Mr. Carter taught me to refine my sound.

What were some of the musical concepts he taught you?
Time, touch, sound, conception of walking lines, focus. His attention to detail surpasses anyone I have ever met.