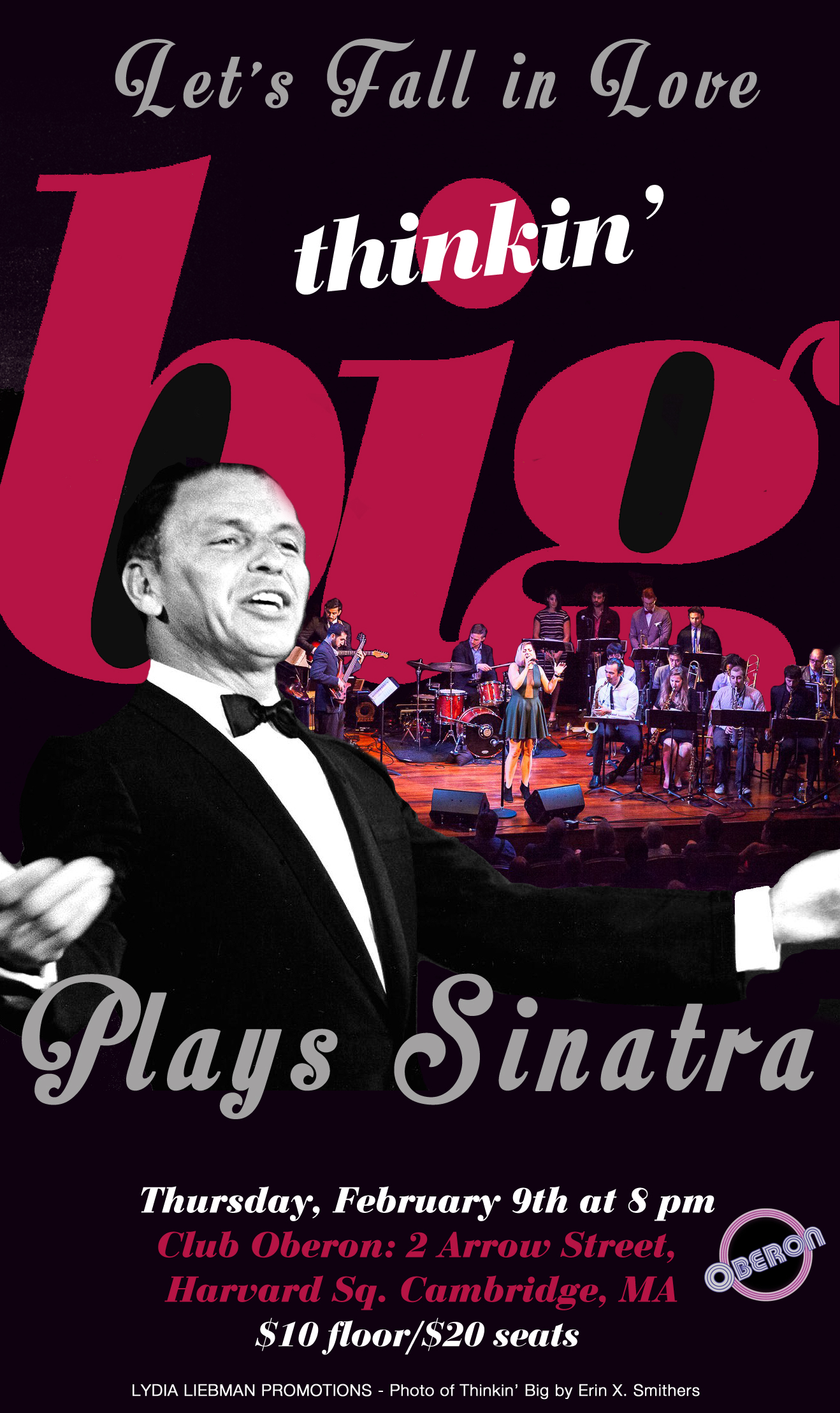 With Valentine’s Day just around the corner, Club Oberon, located at 2 Arrow Street, Harvard Square in Cambridge, MA is proud to present “Let’s Fall in Love: Thinkin’ Big Plays Sinatra” on Thursday, February 9th at 8pm (Doors: 7pm). Thinkin’ Big, who recapture the golden age of Big Band swing with a modern twist, is back to provide a swingin’ night of old Sinatra love favorites and other swing classics.  Coming off a successful 7 day summer tour which culminated in playing the Rockport Jazz Fest as the “Rising Star in Jazz Award”, they are guaranteed to make you tap your foot and sing along.

Tickets are $10 for standing or $20 for seating and are available here.

Formed in October 2010 in Boston, Thinkin’ Big is an 18-piece big band that pushes the limit on traditional expectations of a big band to create a modern-day large ensemble that melds together 18 individual voices to form one united harmony.The ensemble originally began as an outlet for student composers and musicians but has since grown to become an international phenomenon with two international tours and two albums under its belt including the recent “Kaleidoscope”, released at Ryles Jazz Club back in February 2016.

The group embarked upon their first tour back in January 2013 to Toronto, Canada and Rochester, NY.  Upon returning to Boston, Thinkin’ Big hit the studio to record their second album.  In their quest to keep big band music alive, the group hit the road again in August 2013, stopping through Chicago, IL, Rochester, NY, Toronto and Montreal, Canada to play at the famous House of Jazz, the Rex, Melody Bar at the Gladstone Hotel, and more.  Most recently, they opened for Jerry Bergonzi and George Garzone at the Lily Pad in Cambridge, MA.

Thinkin’ Big has stayed true to its roots, and now showcases the vast compositional talents of band-leader and trumpeter, Jonah Francese. According to Francese, the ensemble is truly a “a tight-knit musical family” comprised of some of Berklee College of Music and New England Conservatory’s stand out students and graduates, representing some of the finest young musicians from all around the world.

Jonah first began to play the trumpet in 4th grade and by 6th grade had written his first jazz tune. During his time at Berklee College of Music, he has written charts for Parents Night and is the only student arranger for The Great American Songbook Show, which Phil Wilson’s Rainbow Big Band played in. He is now in his 7th semester, majoring in jazz composition and trumpet performance. He is most proud of his collaborations with Emily Miller on the tune Willow Weep for Me and the Johnny Mercer Medley. He has also had the honour of playing in the Rainbow Band for the past two semesters under Phil Wilson which has been a great growing experience as well as taking private lessons from Christine Fawson, Jeff Stout, Charlie Lewis on the trumpet. For his jazz composition classes, he has had the privilege to study under Dick Lowell, Jackson Schultz, Scott Free, Ken Pullig, Bob Pilkington and Phil Wilson. This band has meant the world to him and he hopes he can continue it for as long as he can.