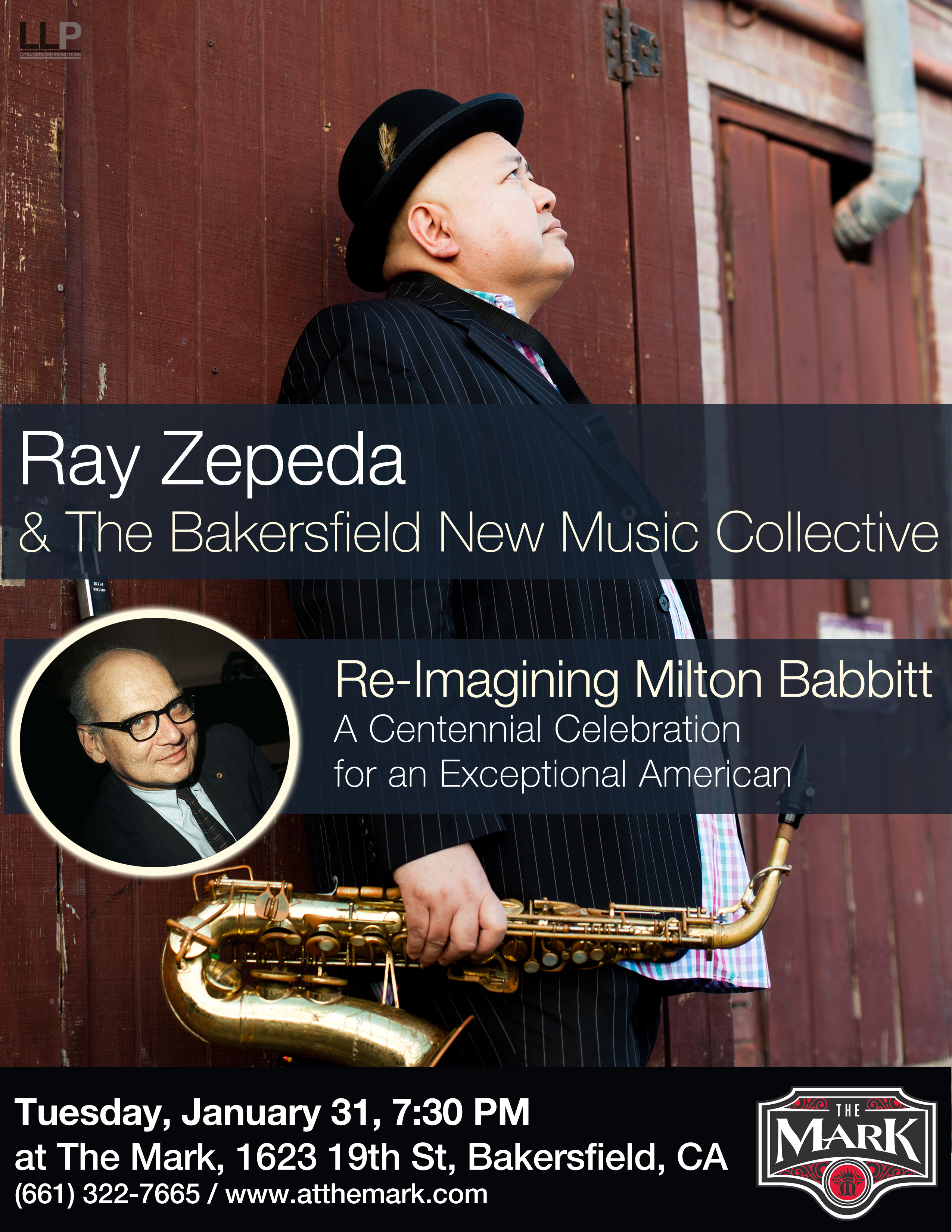 at The Mark Restaurant & Lounge, Bakersfield

A Centennial Celebration for an Exceptional American”

The Bakersfield Jazz Workshop, led by CEO, Steve Eisen is proud to present LA based saxophonist and flutist, Ray Zepeda alongside new-music advocates, The Bakersfield New Music Collective at The Mark Restaurant & Lounge, 1623, 19th Street, Bakersfield, California. Their performance, “Re-Imagining Milton Babbitt: A Centennial Celebration for an Exceptional American” takes place on Tuesday evening, January 31st at 7:30pm and admission is free. This lively night of music will feature a diverse range of original pieces by the Bakersfield New Music Collective and throughout the evening, the ensemble size will vary from solo DJ to jazz quartet or quintet to 11-piece ensemble. Performances on the night will be conducted by Dr. Doug Davis and Prof. Jim Scully.

Founder and Artistic Director of the 16-piece, nascent Bakersfield New Music Collective, Ray Zepeda explains that “the mission of the Bakersfield New Music Collective is to present exceptional, uniquely American art that inculcates our values, celebrates our identity, inspires us, and enhances American life and, in so doing, work to form a society wherein such art may thrive”.

Zepeda is set to record his upcoming record, which will include two tracks with Bakersfield’s finest and most forward-thinking players. One piece, “I Care If You Listen” is composed  for 11 players and is based on Milton Babbitt’s “All Set”.  The other piece, “I Am That Person”, also for 11 players, is along the lines of Herbie Hancock’s “Speak Like a Child” album. This anticipated performance at The Mark will showcase these pieces, alongside others including:

“Philomel” (Babbitt)/”Glass on the Beach” (Zepeda) – a DJ mashup of electronic pieces
“None But the Lonely Flute” (Babbitt) arranged for flute and piano/bass/drums
“The End” (Jay Smith) arranged for tenor saxophone, trumpet, and rhythm section

During this jam-packed performance, the personnel will vary by piece from 1 to 11 players including the following:

Zepeda lived in Bakersfield, California from 2010 to 2013. During that time he performed at the Bakersfield Jazz Festival twice and was heavily involved with the local music scene before returning to L.A. Zepeda professes his love for Bakersfield and the relationship it has had with his music:

“There is much I miss about Bakersfield and, I must say, it set a lot of things in motion with regard to my music career such as the release of my debut CD.  Many individuals reached out to me to help get me integrated into the local scene up there and, for that, I shall be forever grateful.”

He continues to express his admiration for the city, and explains the powerful impact that the Bakersfield New Music Collective could potentially have on the San Joaquin Valley location:
“I have long felt that there is this cauldron of creative energy in Bakersfield that has not had the voice or outlet it could have. The Collective could play a small part in an awakening that will allow local composers and performers to present new works to the local Community and try and build from there.  This is only the maiden voyage”.