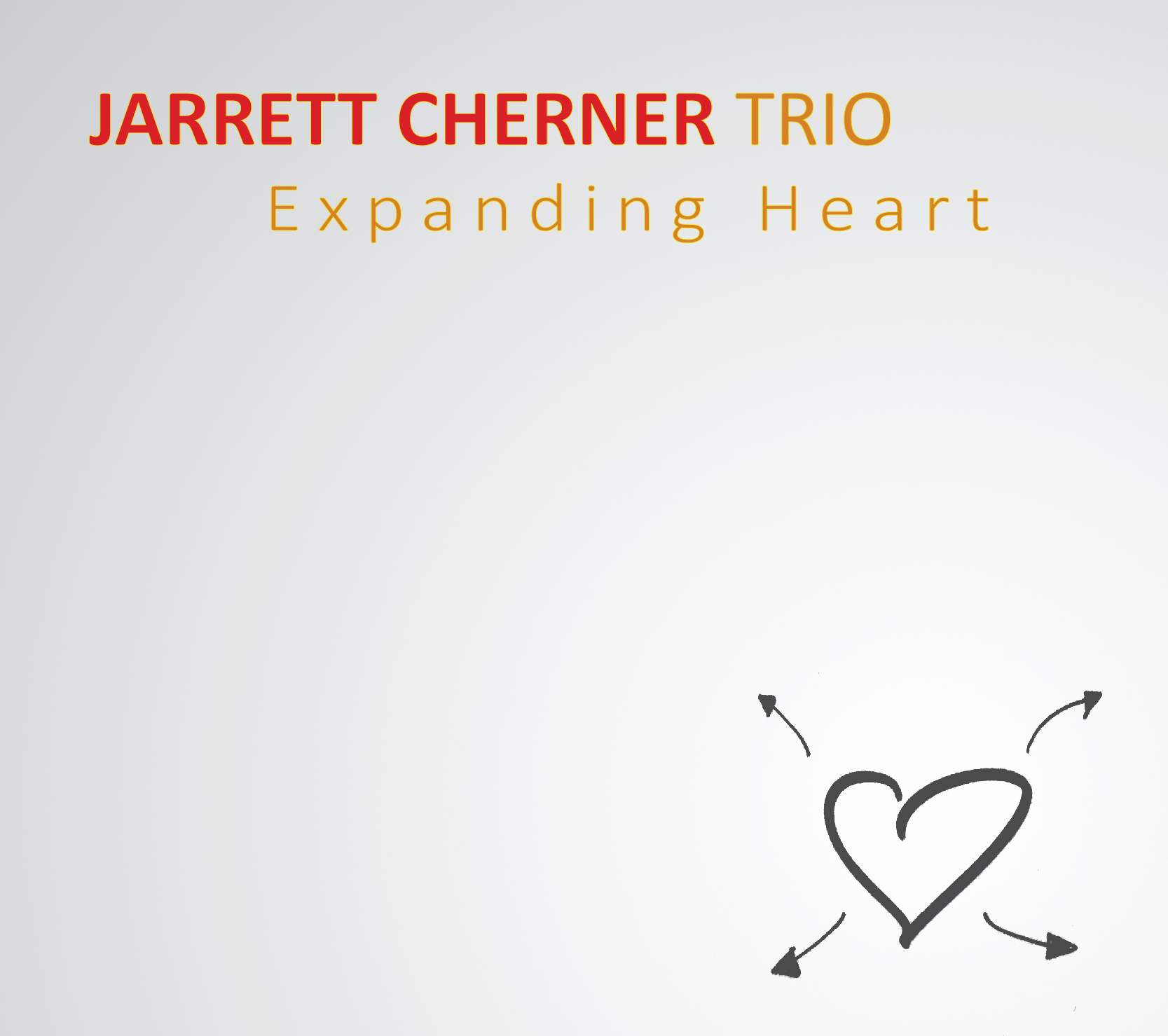 Brooklyn-based pianist Jarrett Cherner has emerged as one of the most compelling young musicians on the jazz scene, beginning with his fine trio debut Burgeoning (BaldHill) in 2006. In recent years he has devoted the bulk of his composing to the collective jazz quintet Sketches (sketchesmusic.com), which has two critically acclaimed albums to its credit: Sketches Volume One (BaldHill, 2013) and Volume Two (Brooklyn Jazz Underground, 2014). Now, with ‘Expanding Heart’, Cherner returns as leader of his own trio and sets out anew, playing brilliantly on a recording that reflects personal growth and combines original material with covers of wildly disparate songs by Vincent Rose, Otis Redding and Ornette Coleman.

While Cherner is intent on continuing with Sketches (and building up his BaldHill label with releases by himself and other artists), Expanding Heart provides another outlet and taps into the deep relationships that Cherner formed with players he met years ago while studying at New England Conservatory (bassist Jorge Roeder) and Manhattan School of Music (drummer Jason Burger). Two tracks featuring another pair of close musical associates, (bassist Haggai Cohen-Milo and drummer Richie Barshay), are from an earlier 2012 session, and more chamber material from this date is slated for release in 2017.

The pristine-sounding Expanding Heart begins with a short solo piano “Opening.” Then the trio enters with its exploratory reading of Ornette Coleman’s “What Reason Could I Give,” from the classic album Science Fiction. “I love Ornette’s music: bluesy and lyrical, freewheeling yet full of syntax,” Cherner says. “The gravity of the melody and lyrics, particularly the major diatonic line punctuated by a single flat-sixth, has stuck with me. We also play the melody inverted and there’s a nice symmetry in turning the melody on its head. In addition to the emotional pull of darkening/lightening the harmony, the major melody becomes Phrygian (minor), and amid the darker sounding mode, the one non-diatonic note (the flat-sixth) becomes a radiant major 3rd.”

Cherner’s writing, effortlessly lyrical and harmonically astute, has a way of bringing out the trios’ best qualities, starting with the quick-paced minor waltz “Distance” — “a heartbreak-inspired song,” Cherner reveals. “It was written a decade ago but never recorded. I used to play it slower and with more longing, but as Jorge recently commented, it’s now played a bit faster and not as closely connected to the heartache. The title originally referred to the long-distance nature of the relationship, but now also refers to the length of time from it.”

Otis Redding’s “I Got the Will” harks back to Cherner’s Boston days playing with a soul cover band. “This lesser-known tune has lyrics that reference the saying ‘if there’s a will there’s a way’ with regard to getting one’s lover back. The singer claims, ‘I’ve got the will but I can’t find the way.’ Raise your hand if you can relate….”

Cherner’s interest in meditation over the last eight years has loosely inspired the three “Meditation” pieces. “I’m still writing these,” Cherner says of the series. The first takes inspiration from Ravel and Barry Harris. The second is “low and wide with a loose backbeat,” Cherner continues. “It’s mostly diatonic in C and I love playing around with inner voice motion to create interesting textures with mostly, well, in this case, the white notes.” The third “is basically through-composed. Even when it ‘arrives’ it feels like it’s going someplace else. The ground has shifted underfoot. Finding calm amid the unsettled mind.”

“Whispering,” made famous by Paul Whiteman in 1920, also provided Dizzy Gillespie with the chord changes to “Groovin’ High.” Cherner and the 2012 trio highlight the melody lovingly, even as they navigate fast and difficult contrapuntal passages and radically reinvent this trad-jazz chestnut. “Learning Bach’s piano music, particularly some of the Goldberg Variations, opened up two-voice counterpoint for me,” recalls Cherner. “I was intrigued by the idea of mixing two ‘old’ musical styles (1920 and 1741) to make something for the present day.”

“Here We Go Again,” with the 2012 trio, sets up a straight-eighth feel with a funky lilt. The intricate written themes, pointedly staccato, give way to inventive and fiery solos from all three players. This piece came about soon after Cherner’s arrival at MSM in 2008. “It references the feeling of being back in school after a few years away from institutional learning, but over time the feeling of being in a familiar situation (again) gives this song new life.”

“Hoppe” comes from the Japanese “hoppeta,” or “cheek.” “This was a term of endearment,” Cherner says. The slow and soulful ballad, with beautifully shaded dynamics and a standout Roeder bass solo, is to Cherner “a song of affection.”

Ornette Coleman resurfaces with the midtempo blues “Turnaround,” in an unabashedly boogie-based version that makes that famous turnaround stand out all the more. The boogie feel “is not really Ornette’s vibe,” Jarrett acknowledges, “but then again, it’s not so far removed from his early days playing R&B. I also love the way the melody alternates major and minor tonalities, getting directly to the heart of the blues.”

The album closes with the third Meditation, developing the intriguing fragment first heard on “Opening.” Expanding Heart ends, then, with an expansion. It’s as clear a summation of Cherner’s top-tier abilities, musical values and consistently evolving vision as one could wish for.

Cherner will embark on an East Coast tour to promote the release of ‘Expanding Heart’: