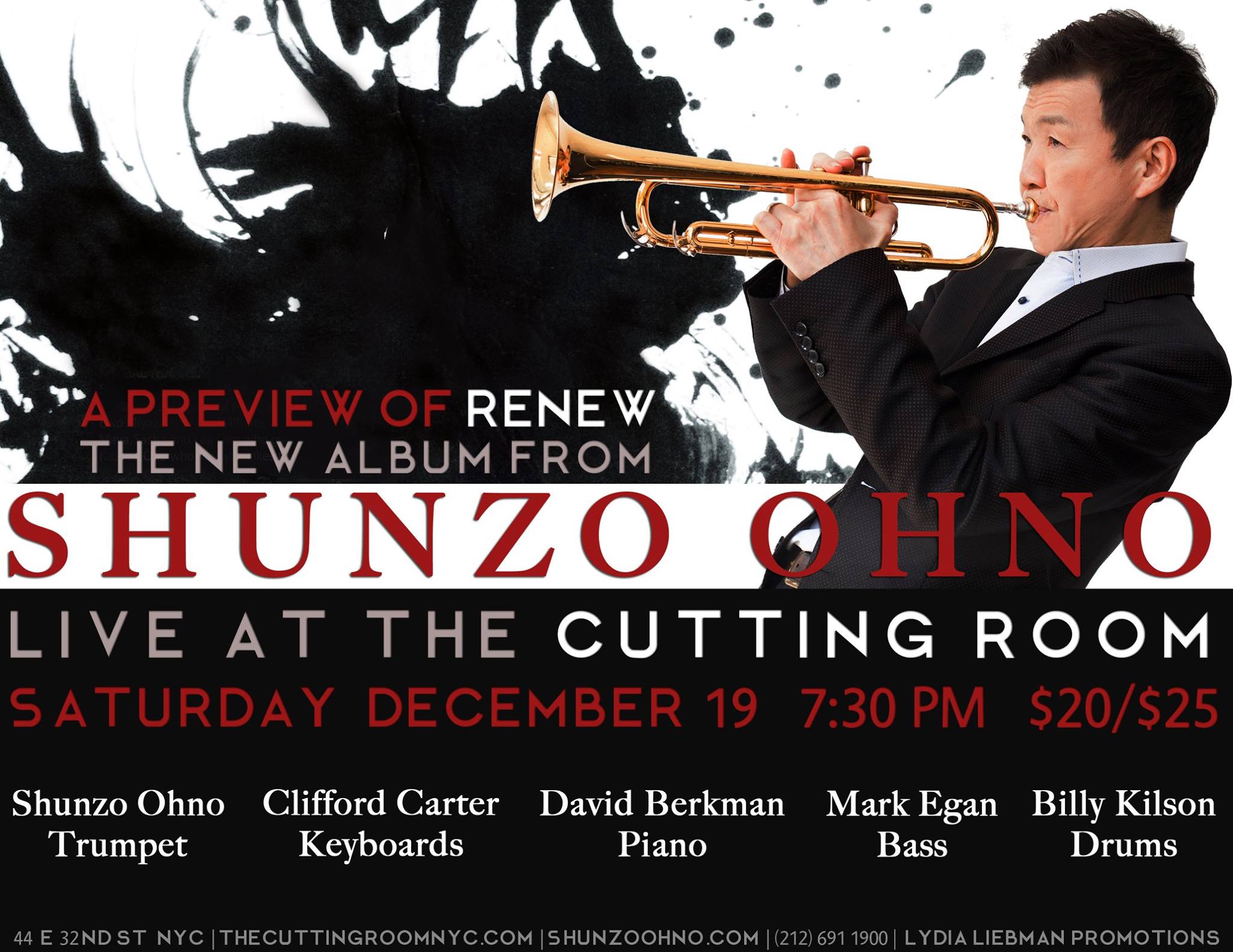 International Award winning trumpeter Shunzo Ohno will preview music from his newest release, ReNew. Inspired by the resilience and recovery shown by the survivors of the Japan tsunami and Nepal earthquake, Ohno wrote the music of ReNew to celebrate the hope that still prevails despite disaster and strife. “ReNew is born of the process of ‘recovery to discovery,” he says, “…to revive with a stronger, broader dynamism, unlimited power and a deepened capacity for life.”

Joining Shunzo will be a powerhouse rhythm section featuring Clifford Carter on keyboards, David Berkman on piano, Mark Egan on bass and drummer Billy Kilson. Each musician brings his own unique voice to Ohno’s dynamic, genre-bending that shares elements of the traditional jazz language, free jazz, and heart-felt melodies.

MORE ABOUT SHUNZO OHNO:
Shunzo Ohno is considered one of the most versatile and influential trumpeters of modern jazz. Born in Gifu Prefecture, Japan, Shunzo’s rise to prominence began in 1974, when he accepted an offer to perform with the legendary jazz drummer Art Blakey. Following his tenure with Blakey, Shunzo propelled with a series of important collaborations, including ones with Machito and his Afro-Cuban Orchestra, Wayne Shorter, Larry Coryell, Herbie Hancock, and Gil Evans, who was a long-time collaborator of Shunzo’s. Shunzo has recorded 16 albums as a leader and has been featured on two Grammy winning recordings.

Shunzo’s life encountered much adversity, including a serious automobile accident and the diagnosis of stage 4 throat cancer. Through both of these life-changing events, Shunzo creates inspiration to not only overcome these challenges, but redevelop his unique sound and musical voice, admired by a global community. In 2014, Shunzo won the International Songwriting Competition’s grand prize with his composition “Musashi”, making Shunzo the first jazz recipient of this prestigious award.

In recent years, Shunzo has been touring the globe, performing frequently in Hong Kong, Malaysia, China, Singapore, Taiwan, Japan and various US cities. Shunzo’s tours are concurrently supporting the recovery efforts following the natural disasters in Japan and recently, Nepal.

Shunzo is thrilled to return to the United States with his latest recording, ReNew which the dedication reads “…Recovery is our united discovery. Let’s live undefeated as we transform, renew, and inspire a magnificent future for all.”