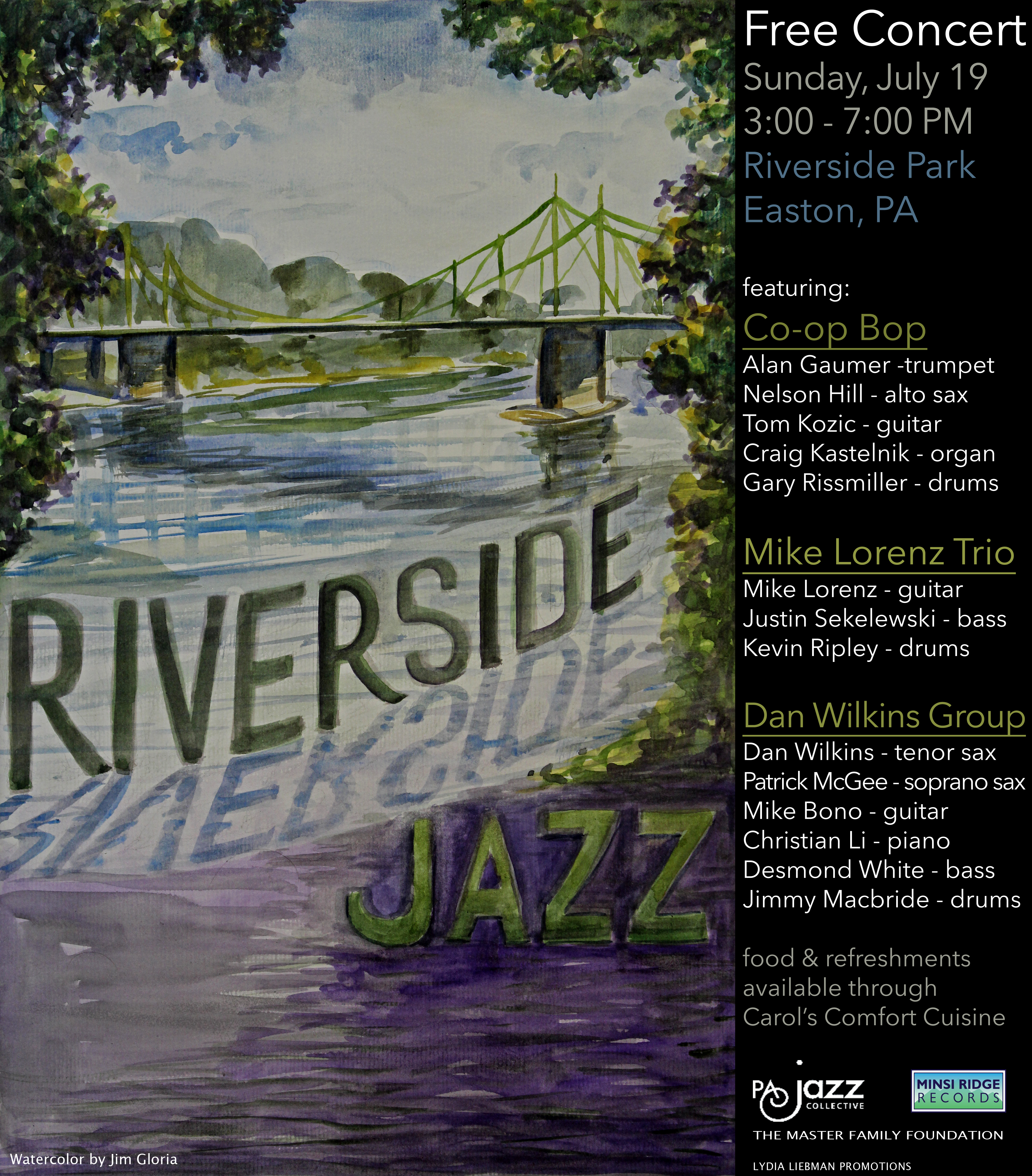 This July 19th from 3-7pm will mark the opening of a newly organized event, Riverside Jazz located at Riverside park in Easton Pennsylvania. The concert is FREE and will feature three notable Lehigh Valley based jazz groups: Co-op Bop, Mike Lorenz Trio, and Dan Wilkins Group. Food and Drink will be available through Carol’s Comfort Cuisine. The concert has been made possible by the efforts of the Lehigh Valley Jazz Collective, Minsi Ridge Records, and the Master Family Foundation, and is a precursor to a new Lehigh Valley Jazz Festival coming in June 2016.

Co-op Bop
A Jazz Quintet, has been performing together for over 35 years. Four of its five members have been named PAJAZZ Artists of the year. They have played with a who’s who of jazz personalities including Grammy winners Randy Brecker & Phil Woods. Co-op Bop features Alan Gaumer on trumpet, Nelson Hill on alto saxophone, Tom Kozic on guitar, Craig Kastelnik on organ, and Gary Rissmiller on drums.
Alan Gaumer is the chair of the Pennsylvania Jazz Collective, a lehigh valley based organization dedicated to the preservation and revitalization of jazz in the Lehigh Valley. PA Jazz frequently organizes events and fundraisers for the benefit of jazz in the community. Visit www.pajazzcollective.org for more information or find them on facebook

Mike Lorenz Trio
Mike Lorenz/Justin Sekelewski/Kevin Ripley
Guitarist/composer Mike Lorenz is joined by two of his most frequent collaborators, bassist Justin Sekelewski (illDelta, Behn Gillece) and drummer Kevin Ripley (illDelta, Triage). This trio and their music formed around a rather serendipitous recording session at the end of the Summer in 2014. Their first record, the self released LP, I Am Watching My Day Slowly Disappear, is exemplary of what the group tries to achieve each time they play. Spontaneous, freely interpreted, folk influenced compositions and improvisations work as an equal-part expression of each musician’s influences. This music has elements of free jazz, folk jazz, and post rock, referencing influences of Miles Davis’ late 1960s and early 1970s recordings, Bill Frisell, Paul Motian, Charlie Haden, Ornette Coleman, and Pat Metheny.
The group plans to record again this August for a future release.

Dan Wilkins Group
Tenor saxophonist/Composer Dan Wilkins recorded his debut album, in February of 2015, featuring six of his original compositions and seven other young East Coast musicians. The album will be released within the month on Minsi Ridge Records, featuring Patrick McGee on soprano saxophone, Mike Bono and Vaughn Stoffey on guitars, Dave Lantz and Kevin Bernstein on keyboards, Daryl Johns on bass, and Jimmy Macbride on drums. Compositions and interpretations draw from many sources particularly from jazz in the 1960s and thereafter, French impressionist music, German Post-Romantic music, and most importantly personal experience and natural phenomena. The band is a vehicle to explore orchestrations of thick harmonic atmospheres and purposeful melody, branching off and breaking away from the common roles and mindsets observed over the history of jazz music. July 19th’s performance will feature a sextet version of this ensemble.