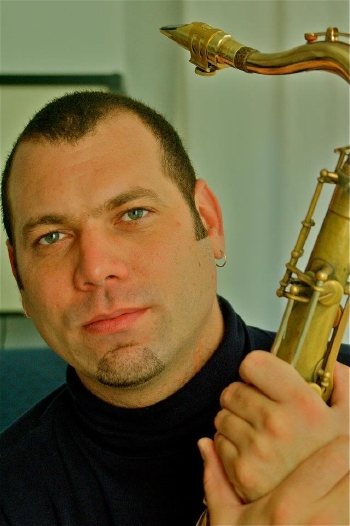 We’re all products of our childhood, a fact that informs our art on every level. Our surroundings bring sounds into our ears and our lifestyle set up the way that we’ll approach the work of being a musician. Some of us are fortunate enough to be constantly surrounded by great music and wise musicians throughout our formative years; that initial exposure generally leads to quick progress in early studies. Other folks grow up experiencing music from a distance, and as a result, they need to work much harder to find their way. Regardless of exposure, a musician’s experience as a young person is a defining factor, shaping future choices, opinions, and preferences. Our background sets up a lot of elements within our musicianship, but ultimately, once we make our way into the world as our artist, we need to own our decisions.

Growing up in Cuba, Carlos Averhoff, Jr. had a lot of fantastic experiences that laid the foundation for a jazz career. His father, Carlos Averhoff, Sr. was a founding member of the influential Cuban Jazz group Irakere, and these were the sounds that you Carlos heard during his childhood. Inspired to pursue music at a higher level, he attended some of the island’s most prestigious music schools, including Manuel Saumell Conservatory, Amadeo Roldan School of Music, and The Superior Institute of Art. Both during and after his schooling, Averhoff made waves on the Cuban music scene, playing with dance music and jazz artists. Despite his success, Averhoff left Cuba in 2006, eventually landing at the Berklee College Of Music in Boston. Graduating with honors from Berklee led Averhoff to the New England Conservatory for further studies and a Master’s Degree. With years of experience and education behind him, Averhoff has established a successful career as a performer, educator, and bandleader.

The significant impact of Averhoff’s musical background and the artistic decisions that drive his current performances are clearly audible in the richly conceived and passionately executed iRESI. As a composer, Averhoff creates unique contexts that show connections to Cuban culture and contemporary jazz without being overally obvious. His performance resonates with equal parts fire and smart intellect, showing a player that has done his homework, ready to explore new musical territories. Working in front of a band that includes respected artists like drummer Francisco Mela, pianist Aruan Ortiz, and guest saxophonist Greg Osby, it’s obvious that Averhoff strives for challenge and inspiration. In so many ways, iRESI is an impressive debut that previews a promising future – with this in mind, Averhoff was kind enough to answer some questions about his background, the new album, and his future.

———-
LATIN JAZZ CORNER: You grew up in a musical family, what are your first memories of becoming a performer?

CARLOS AVERHOFF, JR.: Please allow me to clarify that the only musician in my family is my father and he almost didn’t make it, since his mother – my grandmother – wanted him to be something else. But finally, she accepted my father’s will and the rest is history. I remember clearly the day he put a saxophone in my hands. I was afraid I was going to drop it as my father explained the basics to me. I remember years later how nervous I was on my first national classical saxophone competition at the National School of Arts. Also, I remember Pierre Max Duboi’s classical piece “Le lièvre et la tortue” and how I suffered learning it at 13 years old.

LJC: Your father made a huge impact upon the Cuban Jazz scene – how did his legacy influence you as a musician?

CAJ: The most important legacy I learned from my father was the discipline and the rigor he devoted to the study and practice of the instrument. As a very young kid I sat in several Irakere rehearsals and back home, I used to hear him practicing for hours. As a musician, I took on the same attitude towards studying and working my music. That is also one of the first lessons I plant on my students and their parents; and I learned it from my father.

LJC: Beyond your father, who were some of the important musicians who served as mentors and shaped you as a young musician in Cuba?

CAJ: I didn’t really have mentors in the island, but I definitely had lots of inspiration from great musicians. For example, the work of Chucho Valdes with Irakere, Emiliano Salvador and also working with younger musicians like Roberto Fonseca, Alexis Bosch, and Rolando Luna – these were all great influences on me. I developed more mentoring relationships in the United States with the jazz faculty I have met through my studies in Boston; for example with Jerry Bergonzi, Greg Osby, Bill Pierce, Ed Tomassi, George Garzone; really, the list goes on.

LJC: You studied at the finest music schools in Cuba – Manuel Saumell Conservatory, Amadeo Roldan School of Music, and Superior Institute of Art. I’m assuming that you got a formal classical education – tell us a little bit about that and how you built your jazz skills alongside your schooling.

CAJ: You are correct; my initial training was a formal classical education playing the alto saxophone. My teachers were amazing classical musicians, but I specially remember Mr. Juan Felipe Tartabul, now living in Colombia, and Javier Salvba. Tartabul sometimes made me feel pretty terrible when my lessons weren’t 100% good.

I was 18 years old when I radically decided to change to the tenor saxophone. The school band needed a tenor saxophonist for a cultural exchange trip to Canada, so I offered myself. After that experience, there was no turning back for me. By that time my father was living out of Cuba, so it was his tenor that I took with me. It is still with me today.

I must say that I developed my jazz skills in an autodidact way, completely self-taught; it was basically through listening, transcribing and imitating what I heard on tapes. My father would send me some tapes with recordings; my friends and I would exchange other tapes and we would discuss them. For some reason, as a young kid I was very intrigued with the American jazz saxophonists.

LJC: While you were still in Cuba, you worked with a number of prominent artists in both jazz and commercial music, including Roberto Fonseca, Alexis Boch, Issac Delgado, and many more. What types of opportunities did the music scene offer for a young professional and what did you take away from this time?

CAJ: Maybe your readers don’t know that being a musician in Cuba is like being a rock star. The quality of life is way above the normal standards because musicians travel abroad. In my particular case, working with these great bands gave me the opportunity to travel the world, provide for my family and support myself. I was literally 20 years old, so these experiences helped me mature, grow up fast and prepare myself for life. As a musician, it offered me the chance to perform in great stages and musical festivals around the world. I learned a lot from every band I played with and each of those experiences helped me build part of my musical style.

LJC: What inspired you to make the move to the US? Let us know when this was and where you initially ended up.

CAJ: I crossed the border from Mexico in the year 2006. I wanted to be closer to my father. I felt we needed that experience since we had been apart for 8 years. Also, the possibility of doing a project together was very motivating for me.

LJC: You began your studies in the United States at The Berklee College Of Music in 2008, where you earned a number of honors and spent time with some jazz greats – what did this experience do for you in terms of building your musicianship?

CAJ: I was 28 years old when I set foot at Berklee, which is not the normal average for college education. Because of my age, I really knew what I wanted; my focus was very clear. I owe Berklee College of Music a lot for the great experiences and musical wisdom. I feel fortunate to have been taught by great saxophone and ensemble teachers, many of whom I consider my friends to this day. I learned a lot from them, but also, I have plenty of material to keep studying and to develop my playing for easily, ten more years.

LJC: You started iRESI in 2008, not too long after relocating to Boston. What inspired you to start the group and what were you trying to accomplish artistically at first?

CAJ: By the time I arrived to Boston, I already had original music written and I had a strong desire to showcase my work – I wanted to listen to my compositions and experiment with different interpretations. I remember those days with fun memories, as if it was yesterday. The project first started with friends/brothers from Berklee who were hungry to learn about the Afro-Cuban traditions of the past, but were also curious about more modern styles like Timba. I was simply trying to explore, play my music, and improve my penmanship. For musicians, it is essential to develop your own sound.

LJC: You graduated from Berklee in 2011 and continued your education at The New England Conservatory Of Music. What inspired you to continue studying here and how did it help you advance in your musicianship?

CAJ: Since living in Cuba, Jerry Bergonzi had been one of my biggest musical influences. After finishing Berklee, I wanted to take classes with him. It was a dream to me. So, I never doubted to go straight from Berklee to NEC, no stopping at all. It was a beautiful experience. I learned so much from him. He was one of my biggest inspirations to push forward, to continue working and developing my personal sound. Every student who can take classes with Jerry Bergonzi should feel lucky and proud of it.

LJC: The music on iRESI really straddles the line between Cuban tradition and modern jazz – how do you approach combining the two traditions?

CAJ: I appreciate your perception on the music and your ear to understand how I am exploring ways to navigate both water. I think I am a product of this new generation of Cuban native musicians who live away from the island. Due to different life experiences and musical research, we are creating contemporary jazz while carefully respecting our traditions and the language of jazz.

LJC: What are your future plans for iRESI and any other musical projects?

CAJ: My immediate plan now is to focus on album release concerts have here in the US and abroad. I would like to share this fresh sound of Cuban-influenced contemporary Jazz to jazz audiences.

Pertaining to other projects, I am working on the the music for my next album and a couple of other projects that I can’t wait to start. You will be one of the first ones to know as soon as those dream materialize.