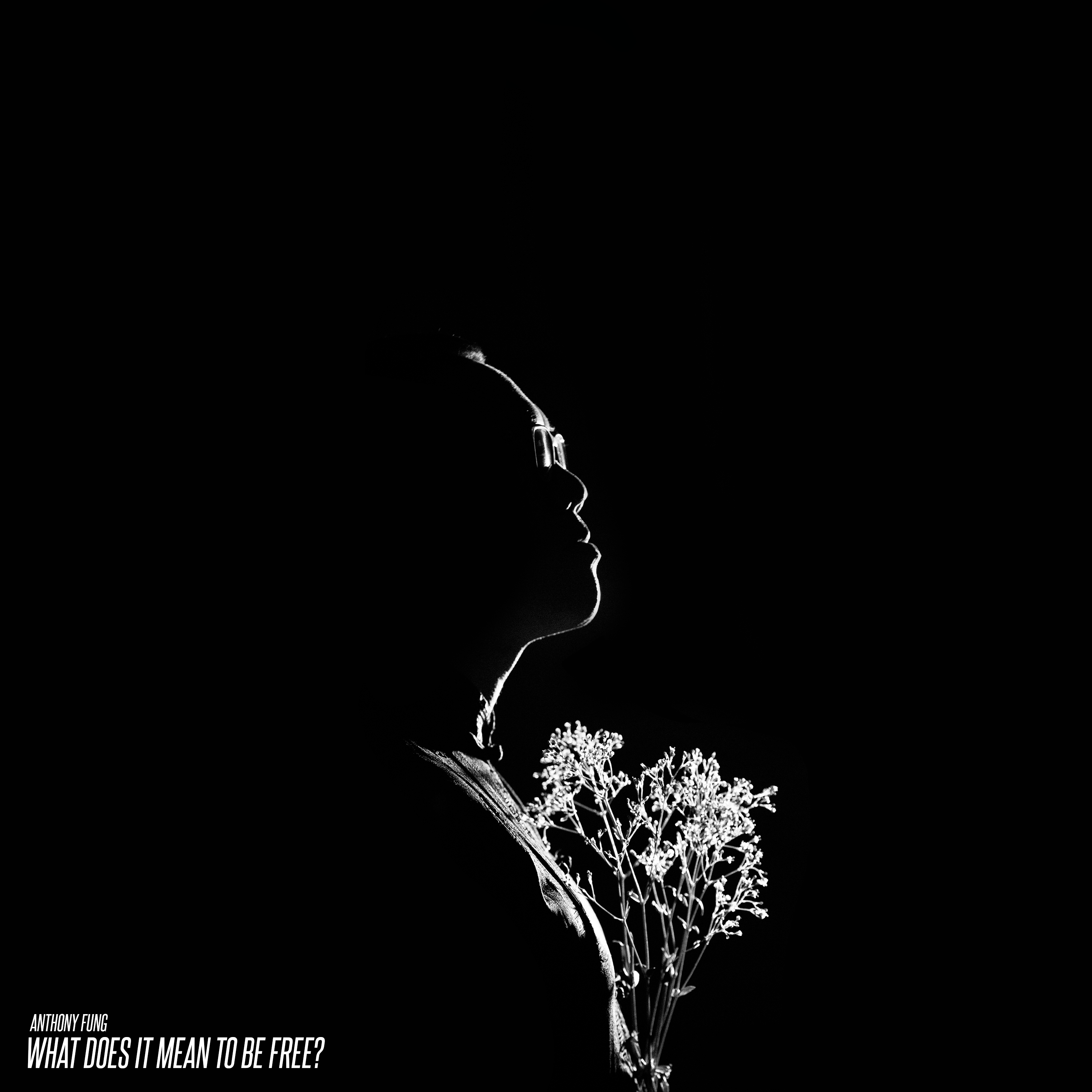 Drummer-Composer Anthony Fung’s Third Album What Does It Mean To Be Free is due out May 6, 2022

With the release of his third album, What Does it Mean to Be Free?, the adventurous drummer-composer Anthony Fung brings uncertainty into clarity with a striking set of colorful songs and a band of LA’s most celebrated creative voices. Joined by close musical friends David Binney, Braxton Cook, Andrew Renfroe, Marcel Camargo, and other formidable young talents, Fung delivers a set of 8 originals and one cleverly arranged Wayne Shorter composition, spanning a variety of groove-worlds while capturing both the joys and the pains of our peculiar moment in history. What Does it Mean to Be Free? will be independently released on May 6, 2022.

Fung, born and raised in Canada, has lived out a star-studded early career since he moved to the United States. He spent several years in Boston training at Berklee College of Music’s prestigious Global Jazz Institute under the mentorship of piano icon Danilo Perez; he then relocated to California to deepen his musical study at the Thelonious Monk Institute of Jazz Performance, this time under the mentorship of Herbie Hancock. These institutions impressed upon their young artists the importance of representing not just jazz music, but the unique rhythmic, harmonic, and melodic flavors from musical cultures all over the world.

In the process, Fung honed not only an expansive technique on the drum set, but also on the page. “I want to write something real,” says Fung. His commitment to serious songwriting has led him far. His last album, Flashpoint, was marked by lush string quartet arrangements, Caribbean rhythms, funky dance beats, and modern jazz textures. “Flashpoint came about when I was still at the Monk Institute. That way of thinking: a lot of world rhythms. It was a culmination of that tutelage, and that was a good time to write all that stuff and just say, ‘I’m good with it.’” On What Does it Mean to Be Free?, Fung retains this kind of global thinking, but, he says, “I wanted to push the boundaries a little more.”

After the onset of the COVID-19 pandemic postponed his originally-scheduled spring 2020 recording date, Fung went to quarantine in Canada. “For me, this record was written—except for ‘Flashpoint Revisited’ and the ballad, ‘Let us not forget to be Kind’—everything was written during the pandemic in Toronto for 6 months.” It was a deeply confusing, nerve-racking time. “I was deciding whether I should even be in the States. COVID, and Trump, and the election: pretty much everyone in the entire world was feeling stuck in some way. We’re at home, the government was telling us to stay at home. Wear a mask. Oh, we’re finally lifting the restrictions—oh, whoops, stay home.”

And so—amidst and against the longings, frustrations and angers that swelled across the world in response to the massive losses of life, global lockdowns, and racial injustices of 2020—Fung composed a new vibrant set of songs. The title track, “What Does it Mean to Be Free?”, opens with an insistent, stinging melodic line undergirded by a heavy rock beat. The distorted electric guitar of Andrew Renfroe battles with the wails of David Binney’s saxophone until the song turns a page, as if entering a dream, and Paul Cornish’s synthesizer explorations hold court before the melody comes back in, raging.

Fung wrote the second track, “El Paso,” about the mass shooting in a Texas Walmart that killed and wounded 46 people. An ominous, cinematic feeling pervades, and Luca Mendoza trades piano solos with Binney’s saxophone, together making both mournful and fearsome calls. On “Defiance,” bassist Luca Alemanno and saxophonist Braxton Cook offer beautiful melodic statements over a plaintive, churning groove. “He’s a brother of mine,” Fung remarks of Cook.

“Flashpoint (Revisited),” written for the eponymous last album, never made it on to that record. “I was supposed to play it on tour for the record,” Fung says, but the pandemic made that impossible; it ended up here, as the fourth track, with a driving rhythm twisting and turning along with its heartbreaking, quicksilver melody. The band climbs to peak intensity by the song’s sharp ending. Immediately afterward, the album relaxes: “Dreamer’s Interlude” is a pause for reflection, an arcing, contemplative solo piano number which searches and weaves between dissonance and consonance.

“Sonny’s Blues,” which shares its name with an iconic short story by author James Baldwin, is a simple, crying pirate-melody—a kind of shanty—set over a flavorful amalgamation of a “Poinciana”-style groove, Mid-East/North African guitar tone, and a reggae-like feeling. Fung’s playing is generous and funky; and Brazilian guitarist Marcel Camargo appears for this track to lend his desert explorations. “Marcel is a legend,” says Fung.

On “Roots,” Fung teams up with percussionist Oscar Cruz’s conga to create a powerful rhythmic backdrop for a snaking melody and intense piano and saxophone solos. And for the second to last number, the album’s ballad, “Let us not forget to be Kind,” Fung calls in the harmonica of Israeli-born Roni Eytan. Written in a surprising “stop-and-start” manner, this is a folksy, patient song that ushers in the album’s imminent ending with a sense of peace. “As far as the process goes, it mostly comes from a feeling,” Fung reflects. “For this one, I was trying to write something more like a prayer.

“This whole record was a learning process. I mixed and produced it myself,” he adds, and due to the pandemic, “There’s only so much we can do; a smaller band, a couple of rehearsals; because of the lockdowns, we hadn’t been playing much. But I kind of wanted to capture that. That time when we’re kind of all stuck: just go in there, rehearse something, and just play. Capture this moment in time and not to be too precious about the music. No ‘I gotta wait ’til the right time, get a piano tuner every day,’” he laughs.

For the final track—the only non-original on the record—Fung used a concept which the song’s esteemed composer himself taught him. “Wayne [Shorter] told us that Miles would take a tune someone had brought in, and he would rearrange it: put this piece there and that piece here.” So, when Fung handed his band a chart for Shorter’s “Sightseeing,” originally recorded by Weather Report, he used the opening statement of the melody and interspersed it as a fragmentary device throughout the song, cycling it through different tempos—and, to close the piece, decided to “take the first two bars of every line, and that’s the melody.” Fung uses this burning up-tempo number as a long vehicle for his only dedicated drum improvisation on the entire disc, delivering ferocious solo statements that conjure the spirits of drum greats Tony Williams and Roy Haynes.

This very bridge—between intense ambition and profound humility—animates Fung’s entire life. “I just want to make sure that I’m writing music that’s honest to me,” Fung says when asked what he wants to do with his music. “I’ve done everything I dreamed of: playing with Herbie, going on tour with Wayne, playing with Binney, Esperanza Spalding. And just representation—especially being Asian-Canadian, I think a lot of cats in Canada wish they could move to the States, and I want to prove that it’s possible. I’m just striving to go further and further.”

Leroy Downs, the venerated host of Los Angeles’s KCRW radio program, Just Jazz, penned the liner notes for the album. He writes, “To be free is to break the self-imposed fortress, to let go and let faith.” Against the difficulties of the past two years, Fung’s commitment to freedom—freedom of movement, freedom of mind, freedom in community—is what shines through on this recording. For while Fung’s songs capture the pain of isolation, public confusion, and gross injustice, they also render audible the beauty of solitude, the joy of brotherhood, and the strength of self-knowledge.