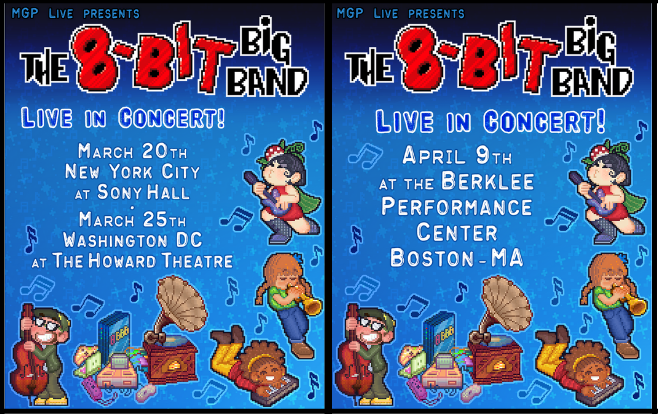 New York, NY – The 8-Bit Big Band, a 33-member jazz/pops orchestra, is excited to announce its return to live performance this Spring. The recently GRAMMY® nominated ensemble, known for its reimaginations of world-famous video game music, will hit the road at the end of March with stops in New York City, Washington, DC and Boston. In between these performances dates, the 64th annual GRAMMY® Awards will take place on April 3 where founder and musical director Charlie Rosen and keyboardist Jake Silverman are nominated in the Best Arrangement, Instrumental or A Cappella category for the song “Meta Knight’s Revenge” off the big band’s acclaimed 2021 release Backwards Compatible.

The band is thrilled to return to the stage to perform new, re-invented video game music classics to its audiences. Since 2017, The 8-Bit Big Band has gained virality from its YouTube video productions with over 21 million views and over 250,000 subscribers across media platforms. In 2021, the big band performed a sold out livestream concert at Sony Hall presented by MGP Live. The band will return to Sony Hall on March 20th for its Spring Tour kickoff performance, once more hosted by MGP Live. The 8-Bit Big Band will continue in Washington, DC on March 25th at The Howard Theatre and close in Boston on April 9 at the Berklee Performance Center.

“I am so thrilled to be performing live again with The 8-Bit Big Band after a long, 2-year hiatus. We can’t wait to get back out there and share our interpretations of some of Video Game Music’s greatest melodies with our fans and listeners,” Rosen said in a statement. “The energy of the audience during these shows is always so overwhelmingly electric in the room, and it’s the missing ingredient that truly elevates this music to the next level. It will be so thrilling to share in the collective experience of our brand of large ensemble video game jazz with everyone again!”

The sets will feature a variety of some of video game music’s most coveted themes, from games such as Mario, Zelda, Sonic the Hedgehog, Kirby, Metal Gear Solid, Final Fantasy, Tetris, Yoshi, Fire Emblem, Pokemon, Portal and more.

More about the 8-Bit Big Band

The 8-Bit Big Band has become a viral sensation since Rosen founded it in 2017 with features on NPR, the Boston Herald and Forbes, to name a few. Their fully produced music videos, regularly uploaded to their YouTube channel, have aggregated over 21 Million views, and across their social media platforms have over 250,000 subscribers, followers, and listeners across the globe, with over 500,000 listeners on Spotify from 156 different countries. The big band has sold out large-scale concert venues in New York City and Boston to date.

At just 30 years old, Charlie Rosen has 11 Broadway shows and countless Off-Broadway and regional productions under his belt. A man of many talents, Rosen has worn the musical hats of arranger, orchestrator, music director, pit musician, and music supervisor. Earlier this year, he received a Tony Award nomination for his orchestrating work on the Broadway production Moulin Rouge.