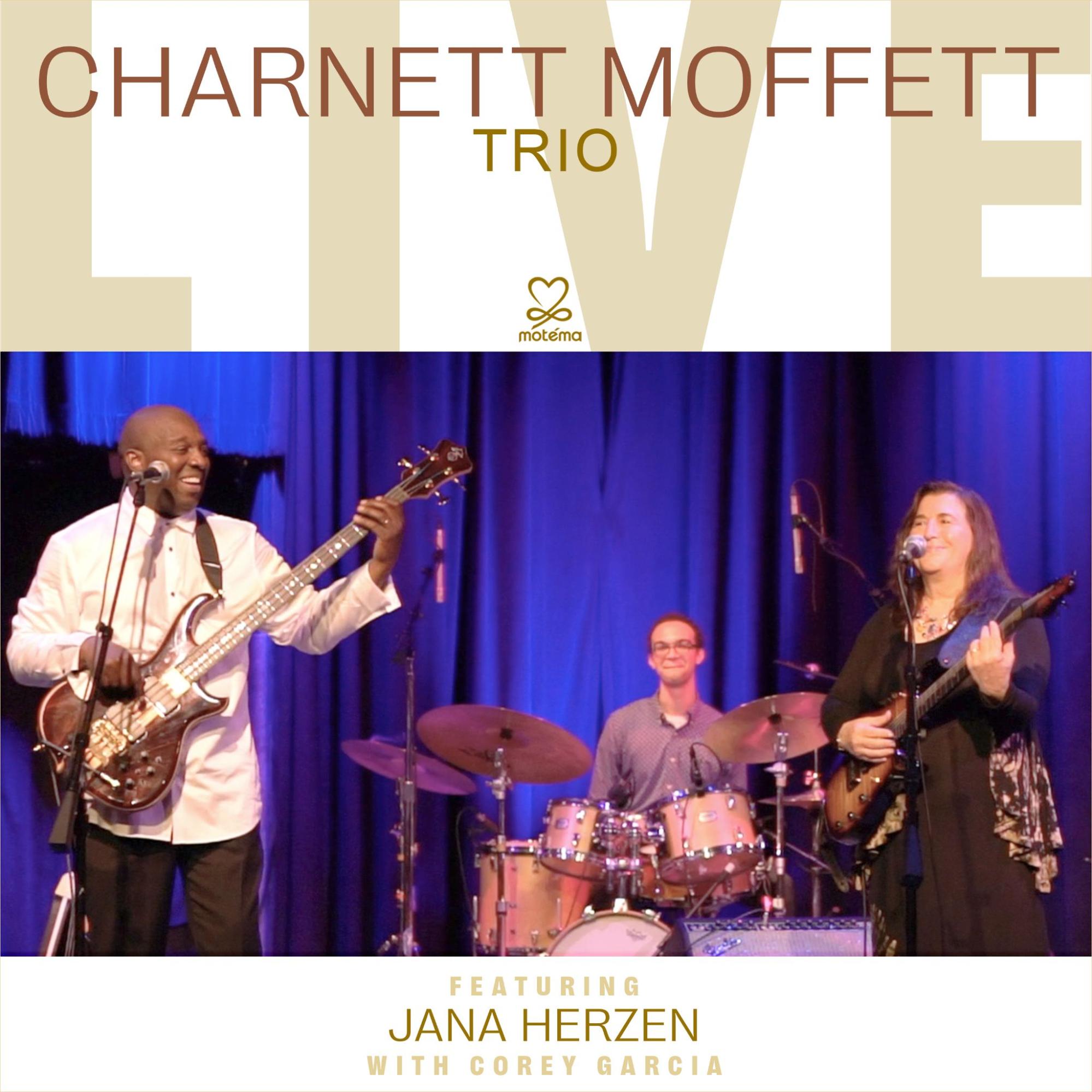 “The interplay of this trio is stupendous and breathtaking.” – JAZZ’N’MORE (Switzerland)

Renowned jazz bass virtuoso Charnett Moffett is set to release his first live trio recording in October, furthering an exciting, unpredictable and richly artistic jazz journey featuring guitarist/vocalist Jana Herzen with drummer Corey Garcia.  The chemistry of this trio has deep roots. Moffett has collaborated with Herzen for over 12 years now, and Garcia has joined them for many live performances since 2018 and recorded with them on Herzen’s 2021 Live quintet album produced by Moffett, and also on Moffett’s internationally acclaimed studio project, ‘NEW LOVE’, released by Motéma in June 2021.

“Whatever the musical moment, there’s a tight synchronicity at play.” – DOWNBEAT

Recorded at Yoshi’s on July 25th, 2021, CHARNETT MOFFETT TRIO: LIVE features Moffett’s legendary virtuosity on both fretless and fretted electric basses, Herzen’s warmly nuanced guitar and vocal musicality, and drummer Corey Garcia’s melodic, symbol-driven swing in a vibrant program of concert highlights that opens with an outstanding rendition of the Gershwin classic “Summertime” and journeys through four exceptional Moffett compositions (two reprised from New Love, and two which make their debut on LIVE).

The musical marriage of Moffett’s long-seasoned bass artistry with Herzen’s instinctive yet refined guitar work and signature warm vocal sound, has inspired repeated press observations about a certain “magic” that arises when these two make music together. Whether performing together in their eclectic duo project, or in Herzen’s folk/rock/jazz projects, or in Moffett’s ensembles which fuse free-jazz, swing, post-bop, world, classical and psychedelic rock, the pair are gaining increasing acclaim as partners who complement each other on the front line.  While each of their projects has its own merits, Moffett’s power trio featuring Herzen and Garcia hit a special vein of jazz gold on the first five tracks of his trio/quartet project ‘New Love’ prompting critics on both sides of the Atlantic to call out this trio’s exciting chemistry.

“Whatever the musical moment, there’s a tight synchronicity at play.” – DOWNBEAT

The trio’s artistic connection becomes even more evident in live performance as Herzen and Garcia instinctively turn-on-a-dime together in response to Moffett’s creative and rapid-fire mercurial lead.    Moffett, who’s storied career includes collaborations with many of the world’s greatest jazz artists including drummers Charles Moffett, Art Blakey, Elvin Jones and Tony Williams realized a long-standing dream in assembling and grooming this trio. In 2018 he  discovered a valuable gem in the young, deep-swinging and sensitive drummer Corey Garcia who’s musical lineage as a protege of Eric McPherson, primed him well to learn Moffett’s musical language fluently. (McPherson, was a protege of Moffett’s father Charles, whom the famed bassist to this day claims as his most important influence.)  Charles Moffett was not only a great jazz drummer, he was also a multi-instrumentalist who innovated in Ornette Coleman’s 1960’s trio and went on to become an influential music educator who notably groomed Charnett and his sibs into The Moffett Family Band, a 1970’s phenom that first rose to fame in Oakland, California with an 8 year old Charnett charming crowds as he grooved hard on both upright and electric basses.

As for Herzen, although an accomplished thespian and singer/songwriter for over 35 years, and the legendary label leader of Motéma Music for the past 18 years, it was Moffett who first encouraged her to stretch out as a jazz instrumentalist by inviting her to play guitar in his band in 2018. No one was more surprised than Herzen to discover her talents in this arena, but to Moffett it was a natural choice to add her on guitar as the two had developed their own musical language over the many years that she had supported his artistry at Motema, and he had supported her artistry by playing bass on her acclaimed singer/songwriter recordings.

“[Herzen’s] feather-light guitar proves to be the ideal sparring partner for this music”. – JAZZTHING  (Germany)

“The pair put out a rich sound full of spirituality and positive emotion.” – ALL ABOUT JAZZ

Due to the nature of this trio, and his choice to select and groom these particular musicians, the dual legacies inherited from his namesakes Charles Moffett and Ornette Coleman (Char-Nett) showed up more palpably on NEW LOVE than on his prior albums, and became even more pronounced at Yoshi’s as Moffett’s instinctual showmanship led the trio on a new adventure that he looks forward to continuing.

The EP opens with a unique and beautiful free-form rendition of the Gershwin classic “Summertime” featuring Jana Herzen’s soulful angelic voice flying heavenward as it entwines around, dances with, and is lifted up by Moffett’s dramatic and melodic bass lines.

Next is “Remembering Your Love,” a spiritual, danceable and swinging new  ‘jazz standard’ with a Brazilian/Latin tinge penned by Moffett and Herzen on which Herzen’s rich vocals ride the syncopated inter-locked swing of the bass, drums and guitar. Midway, the instruments engage in some fun call-and-response interplay.

A spontaneous trio rendition of Moffett’s “Flying in the Air,”a composition which debuted on New Love, follows next.  In this live version, Moffett begins with a freely improvised raga in D that expands in several directions before suddenly morphing into the “Flying in the Air ” theme at the 2:25 mark. The spirituality and showmanship flowing through this track, and throughout the set can be recognized, in part, as a legacy of Moffett’s seven years in the trio of the great McCoy Tyner, one of the most successful runs in jazz.

Moffett’s spirited Ornette Coleman inspired composition “Higher Dimensions” in true harmolodic form, (or perhaps we should say “Charmelodic” form) is also reprised from New Love and takes on entirely new dimensions in the live setting. Moffett uses effects and a Wah-Wah pedal to emit his signature ‘voice-like’ sound from the fretless bass; Herzen improvises long soaring guitar lines in counterpoint to his high octane bass; Garcia swings with power and finesse throughout and takes a fantastic solo feature.

Closing out the program with fire and passion is “Inside Outside,” Moffett’s newest composition. Using multi-effects, he delivers a fretless bass opus that only he (with this trio) could deliver.  The driving synchronized theme takes off with power then quickly evolves into a freely-improvised modal excursion. Moffett’s bass romps through multiple realms from nursery rhymes to overdrive outer-space sci-fi sounds to high speed funk thumping and plucking. All the while Herzen’s sustained melodic guitar joins with Garcia’s driving swing symbols to provide a harmonic and rhythmic framework to both contain and elevate Moffett’s firework improvisations.

“Engaging… feels connected to bands like Mahavishnu Orchestra and the ’70s work of artists  like Pat Metheny and Larry Coryell.” – ALLMUSIC.COM

In a Moffett show, the band never knows what will happen next, a trait he first picked up from his days with free-jazz innovator and Pulitzer Prize winner, Ornette Coleman. “One time Mr. Coleman rehearsed us for a month on one set of compositions, then threw them all out at show time handing us an entirely new set to play!” The “surprise the band” at any moment approach ensures true improvisation on the band stand, and evokes fresh playing. It also requires fearlessness on the part of the band and is certainly not for the faint of heart!