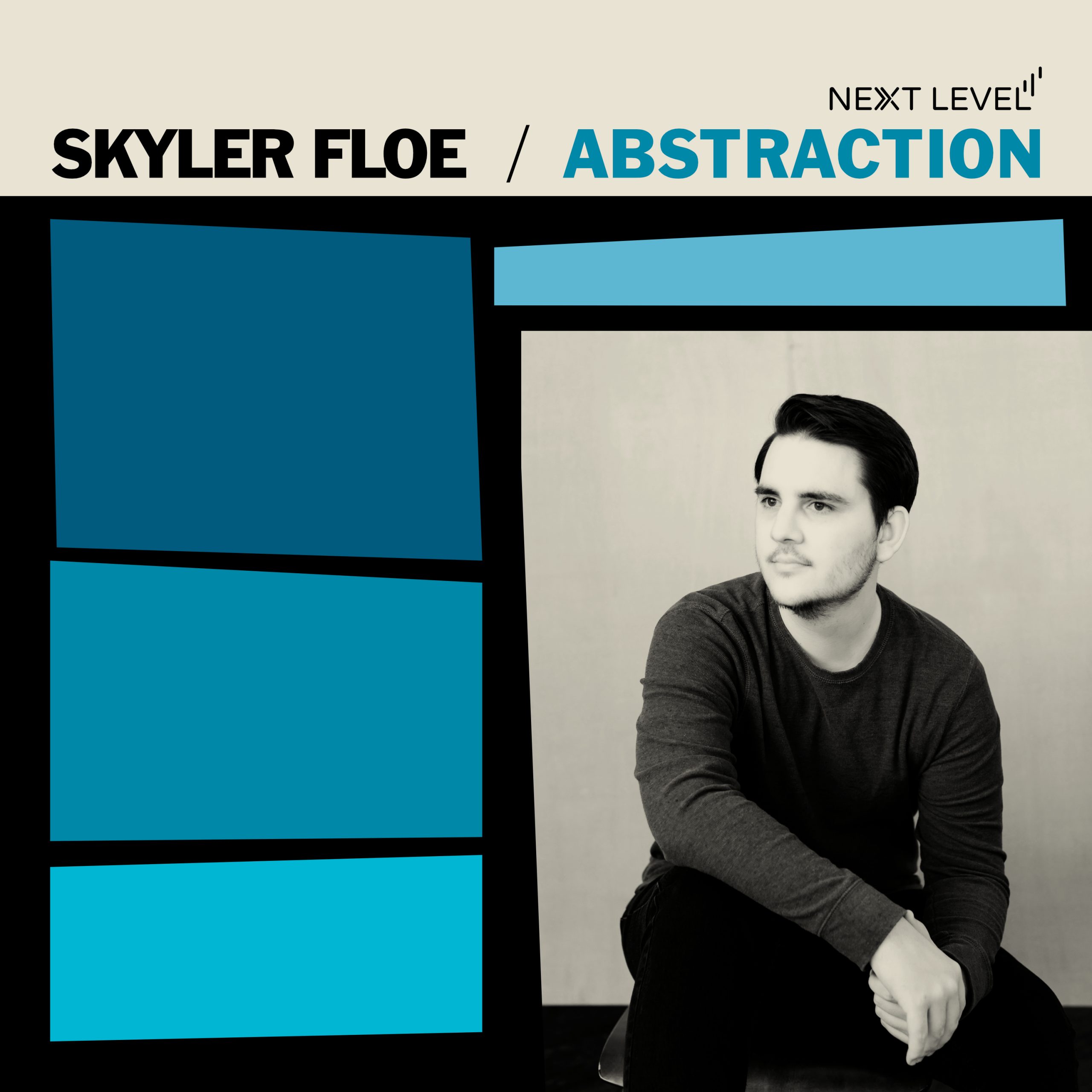 Next Level, an imprint of Outside in Music, is thrilled to announce the October 8, 2021 release of Abstraction, the debut album by rising star trumpeter Skyler Floe. On this nine-track collection of compelling original compositions, the New York-based musician showcases his voice as both a composer and soloist. Floe’s debut release is both a nod to the music of today and a showcase of the artist’s well-versed vocabulary in the history of jazz, calling upon his roots as a native of the greater Seattle area as well as a former resident of Indianapolis. Joining Floe are four of the top musicians on the Indianapolis jazz scene including tenor saxophonist Sean Imboden, pianist Steve Allee, bassist Nick Tucker, drummer Chris Parker and special guests saxophonist Greg Ward and vocalist Samantha Louise.

Born and raised in Lynnwood, Washington, a suburb north of Seattle, Skyler Floe first began playing music as a child. After picking up the trumpet for the first time at age 10, Floe went on to play in the highly-decorated Mountlake Terrace High School jazz band, and as a senior, participated in the Essentially Ellington Jazz Festival, where Wynton Marsalis awarded him the Outstanding Trumpet Soloist Award. He went on to attend Central Washington University, and during this time started to develop a reputation as a star trumpeter in both the jazz and classical realms. After finishing his studies at CWU, Floe spent two years studying at the Institute of Jazz in Graz, Austria under the tutelage of Jim Rotondi. While in Graz, Floe performed and recorded with musicians from all over the world in Austria’s lively jazz scene. He eventually formed his own group with some of these musicians named The Chordless Quartet. Following his time abroad, Floe went on to complete his MM in Jazz Studies at Indiana University, where he is currently an associate instructor at Indiana University’s Jacobs School of Music. In 2019, Floe was one of five trumpet players selected to compete in the prestigious Carmine Caruso International Jazz Trumpet Competition. Floe now resides in New York City.

The music featured on Abstraction reflects several pivotal moments from Floe’s life – particularly from the past ten years, and notably those that had an impact on how he hears and interprets music. “An abstract is a removal of unnecessary details until only the most important points remain. This album is the result of taking my musical journey through that process. Boiling down my adult life into the moments that forever changed how I hear music,” Floe shared. While the inspiration ranges from a ten year period, the majority of the music on Abstraction was written recently, with the oldest composition dating back only to 2017. “When revisiting some of my older compositions, I realized that what they had been missing all along were arrangements that adequately told the stories that inspired their conception in the first place. Ultimately, that was the focus of this album; to have the composition, arrangement, and performance of each tune be in sync with the story behind it.”

“The album kicks off with “Terrace”, a lyrical homage to the town Floe grew up in, Mountlake Terrace, the place where he remembers falling in love with jazz. “I listened to the albums of trumpet greats Roy Hargrove, Wynton Marsalis, and Maurice Brown non-stop and loved any tune with an odd-meter and groove that made you move. I used to look back at my musical tastes from that time and scoff at how ‘unrefined’ they were. But this composition acts as a revitalized appreciation for the jazz albums that started it all for me. Whether they are timeless or not, they are timeless to me,” reflects Floe.

The wryly titled “Opinionated (is Putting it Lightly)” is the trumpeter’s oldest composition on the album, written during his time in Graz. During this period, Floe was obsessively consuming the chordless quartet albums of Ornette Coleman and Miles Davis’ second quintet bootlegs, and was enamored by these musicians’ ability to be unapologetically themselves. “These albums helped me realize that if I wanted to make my unique mark on this music, I also had to be comfortable with who I am even when others didn’t dig it,” he reflects. “Opinionated” follows a narrative throughout it’s 7+ minutes: the opening head represents Floe as he is, “opinionated to a fault”, and the trumpet solo that follows represents self-reflection. The new material on the final head-out represents that he has found acceptance.

Tones shift on the title track, which features the stunning vocals of Samantha Louise, and her original lyrics. Intended at first to be a short lullaby, “Abstraction” evolved into one of the album’s most complex arrangements. Another highlight alongside the gloss of Louise’s voice is bassist Nick Tucker’s impressive solo.

The centerpiece of Abstraction is a three-part suite comprising three dynamic movements: I. A Short Climb in Bare Feet, II. Reason’s Last Pitch, and III. The Plunge. “There have been a few times in my life when I’ve reached a point of no return; where I needed to just jump in and see where the current takes me. Sometimes after making a decision like that, I can’t help but wonder what my life would have been like had I gone down road A instead of B,” reflects Floe. This trio of pieces describes the “self-inflicted turmoil” the artist often endures before making an important decision.

Next up is “Odd Chicago”, an homage to the Windy City and its thriving jazz scene. When in Indiana, Floe would often travel to Chicago to check out its music and consequently found himself thrown into unfamiliar musical situations.” These experiences are mirrored on “Odd Chicago”, which is filled with uneven phrase lengths and unconventional harmonic rhythms and forms.

Scorcher “For Real” is an ode to the incomparable Woody Shaw. One of Floe’s favorite trumpeters, the young musician has always found solace when revisiting Shaw’s vast catalogue. This burning blues features fiery solos by the horns, as well as a rapturous drum solo from Chris Parker. Abstraction closes with “The Top Floor”, a musical showcase of the top-notch musicians featured on the record. Very little direction was provided by Floe when this track was recorded, allowing each musician to bring their own musical personalities to the table. “I knew I could trust each of them to follow their ears first and foremost and the end result was something truly original and free of preconceived notions.”

With the release of Abstraction, Skyler Floe establishes himself as a fresh and innovative new voice on the contemporary jazz scene. This project releases via Next Level and will be available on all platforms on October 8, 2021.