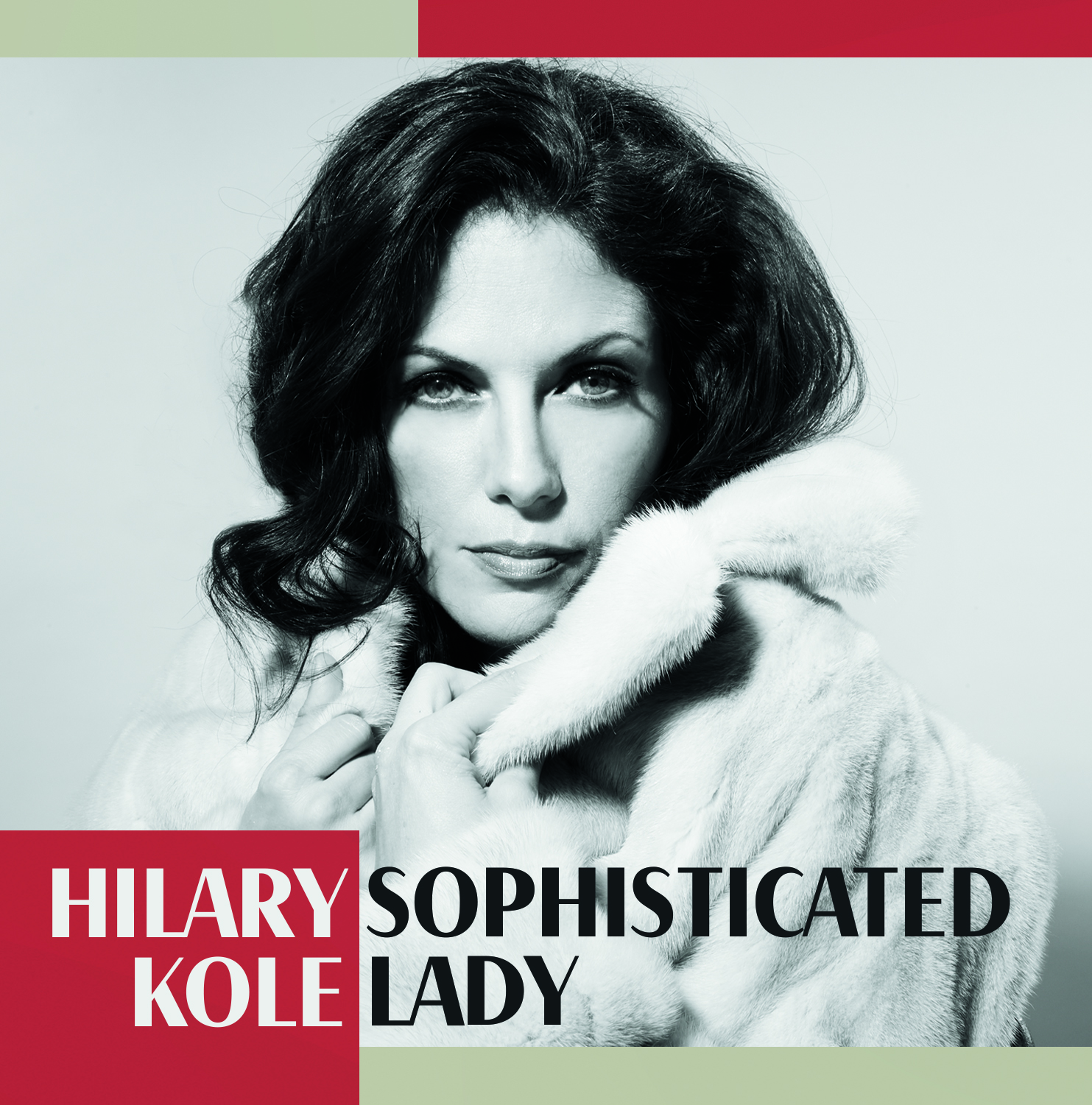 “Kole is about as polished as they come without losing a whit of warmth. Her vocal range and control remain astonishing.” Theater Pizzazz

Consummate vocalist and New York City jazz staple Hilary Kole is thrilled to announce the release of Sophisticated Lady. Adorned by Kole’s soulful vocal sensibilities and a stellar band of first-rate instrumentalists, Kole’s latest release is a collection of mature, nuanced renditions of jazz classics which retain a spirit both heartfelt and adventurous. For nearly two decades, Kole has been heralded for her intimate piano and vocal performances, themed shows with her jazz ensemble, special concert hall symphony performances and critically acclaimed recordings showcasing her compositional prowess. With Sophisticated Lady, Kole lends her voice to 11 archetypal songs from the jazz idiom. Accompanying Kole on this auspicious release is her longtime rhythm section made up of guitarist John Hart, pianist Adam Birnbaum, bassist Paul Gill, drummer Aaron Kimmel, vibraphonist Tom Beckham and woodwinds player Chris Byars who created the thoughtful arrangements for the vast majority of the album’s tracks. Sophisticated Lady will be available worldwide on July 23, 2021, following a special release in Japan on June 25th, 2021 via Japan Victor.

The celebrated lady of song launched her performing career as the youngest singer ever to grace the stage at NYC’s legendary Rainbow Room. For a year and a half, Kole performed 6 nights per week at the storied venue, cutting her teeth as a working musician alongside a slew of great players. Kole notes “When I was contemplating making a new record, I thought back to my days as a young singer at the Rainbow Room. Most of the standards I sang then were the songs one could always call with a pick-up band. Every musician at the time knew them. As I transitioned into more headline work and the worlds of jazz and cabaret, it became clear to me that it was important not to sing the ‘same songs’ that everybody knew. Nevertheless, the idea of going back to the basics has been calling to me lately. They are standards for a reason, after all. So, I decided to do a record of classic standards – songs I might have done at the Rainbow Room 20 years ago, or my father (acclaimed Broadway singer Robert Kole) might have done on his club dates at historic venues such as the Copa or the Maisonette Room 60 years ago.” With a refined musical sensibility, Kole returned to the very songs that marked her musical upbringing.

“Ms. Kole soars…with a voice that is at times powerful and self-assured while other moments she brings a vulnerability that touches the soul.” The Associated Press

Kole decided that she wanted to create a tapestry of sound that made this record different and unique even in its familiarity. Long a fan of Chris Byars’ playing and arranging, Kole knew that Byars would be up to the task. “When I realized I wanted a classic but unique sound,” Kole exclaimed, “I immediately thought of him – and I’m so glad I did. What Chris came up with is dark and beautiful and challenging – not your average small group charts, and just what I wanted.”

The album begins with the title track “Sophisticated Lady”. The unhurried swing is propelled forward by the rhythmic anticipation created by Kimmel’s brushes, the flawlessly executed hits orchestrated by Byars, and Kole’s passionate refrains. A masterclass in dynamics, the melody gives way to a tasteful solo by Byars and soli section from the instrumentalists. The bright-tempoed “The Best Thing For You (Would Be Me)” is delivered here with an unrivaled zeal and exuberance. The rendition showcases Kole’s immense melodic facility while scatting as well as wonderful solo sections from the full ensemble.

“Somebody Loves Me” and “Make Me Rainbows” provide stellar examples of Byars using the full breadth of the instrumentation to compliment Kole’s soaring vocals. Hart’s guitar and Beckham’s vibes add a softness and a fullness to the soundscape, while Birnbaum’s comping provides the perfect harmonic and rhythmic underpinnings to Kole’s voice, locking impeccably with Gill’s bass and Kimmel’s drums. Kole notes “Aaron Kimmel’s sense of swing and restraint gives the record its retro feel – he is a drummer from another time.”

Kole adds new dimensions to Ellington’s classic “In A Sentimental Mood”, and “‘Round Midnight”, melding notes of wistfulness and resolve. “Round Midnight” offers a shift of dynamic with a pared-down instrumentation. Kole’s striking delivery of this Thelonious Monk-penned standard is complimented by guitarist John Hart’s masterful harmonic support, harkening back to the classic guitar-vocal duo of Ella Fitzgerald and Joe Pass in both interplay and timbre. The ensemble concludes the album by exploring a cleverly-orchestrated and musically-demanding rendition of Richard Rodgers’ “The Sweetest Sounds” featuring gorgeous soli performances from Byars and Beckham and soulful improvisation from Hart, Birnbaum and Kole.

Kole’s highly-anticipated Sophisticated Lady follows several critically-acclaimed releases by the renowned vocalist including 2014’s A Self Portrait which received 5 stars from The Associated Press and glowing reviews from USA Today, JazzTimes and Downbeat Jazz Magazine. 2016 saw the release of Hilary Kole: The Judy Garland Project which received high praise from Downbeat Jazz Magazine and JazzTimes as well theater publications such as Talkin’ Broadway and CabaretScenes. Sophisticated Lady goes far to cement Kole’s stature as a preeminent interpreter of song within the jazz idiom.