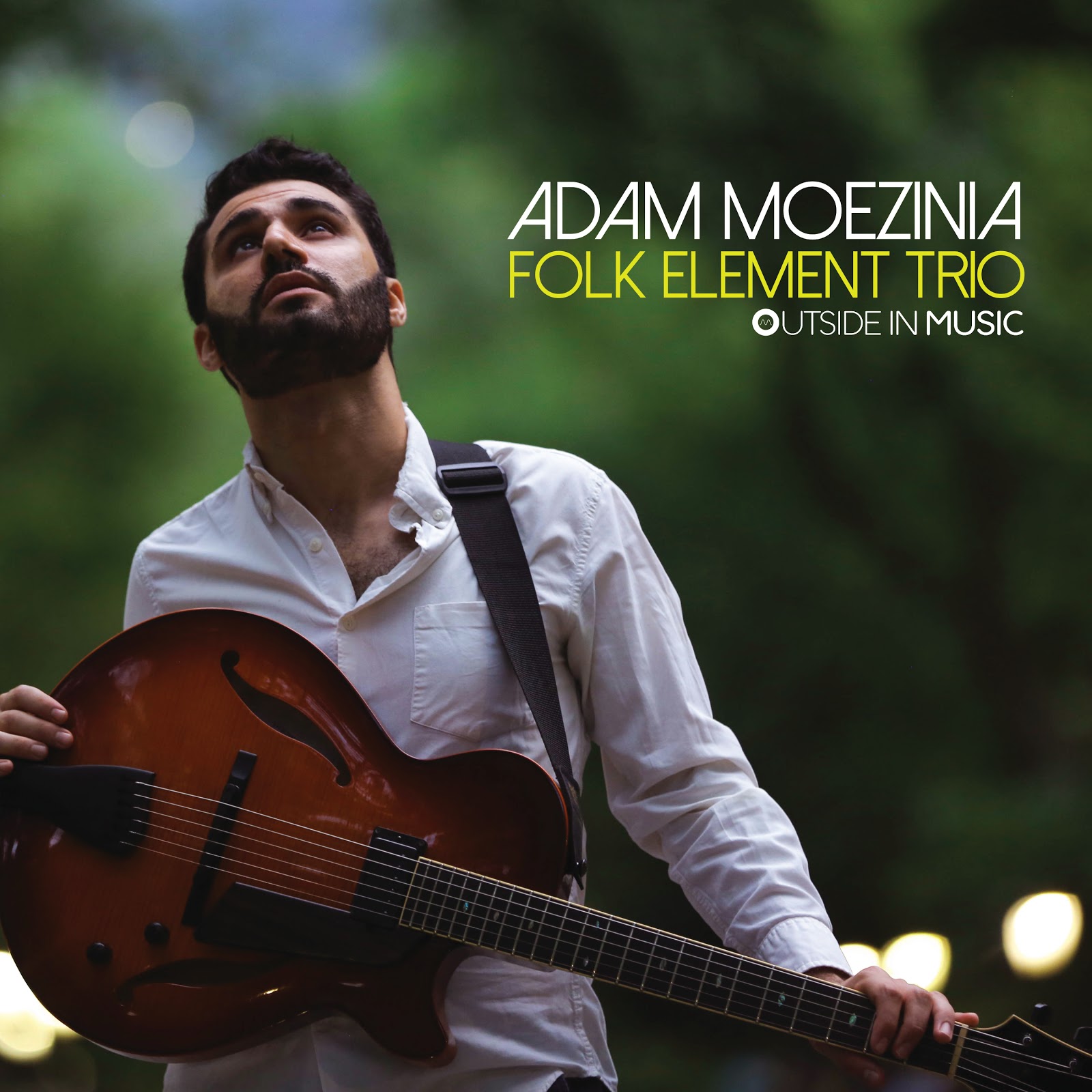 Outside in Music is pleased to announce the release of esteemed guitarist Adam Moezinia’s first album as a bandleader, Folk Element Trio. A celebration of global folk traditions and the influence that the composer derives from them, this exciting new release features elements of Beninese, Malian, Welsh and American folk music in a jazz context. Folk Element Trio introduces audiences to Moezinia’s sophisticated, soulful compositional style and his refined improvisational facility. Bassist Dan Chmielinski and drummer Charles Goold fill out the remainder of Moezinia’s Folk Element Trio, the creative and cohesive unit that graces the album’s tracks.

This thoughtful and respectful display of musical synthesis seamlessly incorporates global musical idioms with the rich tradition of jazz, of which Moezinia is no stranger. Moezinia recalls “Since I was about twelve years old, I’ve been somewhat obsessed with the musical genre that we call “jazz”. That being said, I’ve also consistently immersed myself in many other styles… I was going through a period of frequent writing when I realized that almost all of my compositions contained a certain element, the “Folk Element”: elements from more simple, folk-based music, less commonly found in jazz. From there, I started upon a sort of musical exploration, discovering for myself some of the different kinds of folk music from around the world.” From there, Moezinia sought to compose with the simplicity, lyricism and rhythmic traditions of folk music in mind, while also incorporating the harmonic intrigue of jazz.

The album begins with the song “Celebration” which draws influence from Beninese and Malian music. Along with “Groove March”, “Celebration” is part of a larger piece by Moezinia entitled the “Ivory Suite” which is inspired by, among many others, Beninese guitarist Lionel Loueke and Malian singer Oumuo Sangare. The jubilant album-starter demonstrates the bandleader’s acuity for melodic invention as well as the stellar interplay that can be expected between these three masterful musicians on the remainder of the release.

Aside from Moezinia’s four original compositions, Folk Element Trio features four of the bandleader’s modern arrangements of timeless classics by such folk luminaries as Bob Dylan,  Robert Johnson, and Duke Ellington (whom Moezinia espouses to be one of America’s most beloved folk composers, as jazz is America’s folk music). On Ellington’s “Azalea”, Moezinia’s electric blues/country guitar sound achieved through the use of a reverb and tremolo, contrasts with Goold’s sparse deconstructed New Orleans “dirge” rhythm to create a unique and evocative texture. Dylan’s “Don’t Think Twice It’s Alright” features bassist Dan Chmielinski on the track’s melody with thoughtful accompaniment from Moezinia. One can’t help but note the beauty in the track’s nuanced changes in dynamics, and it’s clear influence by the work of Bill Frisell.

The album concludes with the Mississippi Delta blues anthem “Come On in My Kitchen”. This decidedly modern arrangement offers the classic melody with subtle reharmonization and a boogaloo groove. Featuring another stunning solo by Moezinia, the piece demonstrates the bandleader’s intensive study in the blues tradition. With Folk Element Trio, Adam Moezinia has created a spirited blend of tradition and innovation, honoring the folk traditions of several countries while creating a sound that is entirely his own.

Guitarist Adam Moezinia is a native of Los Angeles, where he studied at the Los Angeles County High School for the Arts (LACHSA) under the mentorship of Jason Goldman, Walter Smith III, and Kenny Dennis. In 2010, he moved to New York City to study at The Juilliard School’s Jazz Studies department, where he received a Bachelors of Music degree. Since then he has worked with many greats such as Freddy Cole, Mike LeDonne, Cecile Mclorin Salvant, George Coleman and Kenny Washington at venues like Jazz at Lincoln Center, The Blue Note, Birdland, Smoke, Scullers and Bird’s Basement. Adam has also been performing regularly with his own group, the Folk Element Trio, since 2017. The trio is rooted in the jazz tradition but is influenced by folk music from all over the world including West Africa, South Africa, the Caribbean, the UK and Appalachia. In January 2020 they embarked on their first national tour with great success. Moving forward, they will continue to explore the unique relationship between jazz and folk music, sharing those discoveries with audiences across the globe.